"Jonah from Tonga": HBO forgets the first rule of brownface

Chris Lilley's "Jonah From Tonga" is a satire, but it's hard to figure out what exactly it's trying to say 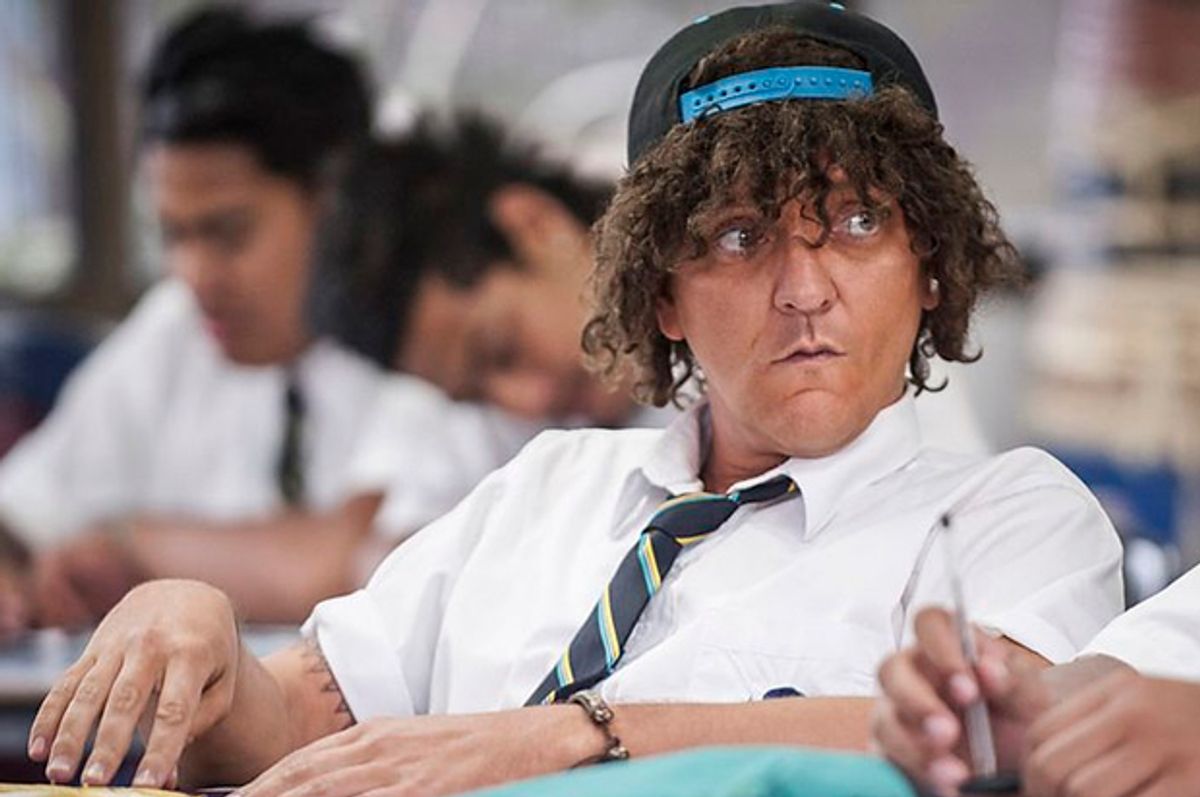 Despite protests, HBO is moving ahead with a show by controversial Australian comedian Chris Lilley, who, at 39, is the unlikely star of a mockumentary about a troubled 14-year-old boy from the Kingdom of Tonga named Jonah. The show, "Jonah From Tonga," which debuted several months ago in Australia, presents Lilley -- a white man -- in brownface as a Tongan boy with behavioral problems, a penchant for dick jokes, and a massive crush on his cousin Melody. (I believe you can already see what the issues with this show are.)

Lilley's fans are already familiar with Jonah Takalua, first seen in critically acclaimed mockumentary "Summer Heights High," picked up by HBO from Australian TV in 2008 (another character spinoff, starring haughty teen girl Ja'mie, aired on HBO in 2013). His comedies have been influential in Australia and beyond, injecting slang like “Puck you, miss," “quiche" and "ranga" into Australian lexicon. But even in "Summer Heights High," the character of Jonah perpetuated stereotypes: writer Morgan Godfery, who has criticized "Jonah" as minstrelsy, recalled in the Guardian that after the popularity of "Summer Heights High," "Suddenly, it was acceptable for white Kiwi kids to start fetishising Polynesians."

So what, exactly, is "Jonah From Tonga," supposedly a satire, trying to say? HBO's press release says that the show takes "a humorous and brutally honest look at life in an average Australian public school," but it's clear both from the title and the show that race is a core part of this "humorous and brutally honest look." The social circles in Jonah's high school are defined by race; Jonah describes the various female cliques as "Chick fobs, Chick wogs, chick filos, chick curries, chick africans, chick rangos, and ... ching-chongs." And some portion of Jonah's antics stem from feeling discriminated against: “Teachers at this school are so racist,” he declares in the season opener, and in a later episode, tells one of the rich white students, "Just cause you've got different colored hair than us doesn’t mean you own us." Another teacher characterizes Pacific Islanders as "tricky kids" who are "hard to control," confirming Jonah's own feelings.

Almost universally, no one likes Jonah: He is described by his peers, his family and his teachers as "a fucking idiot," "a very bully person," who "thinks he's 21, thinks he's a gangster" who is "virtually illiterate." His only friends are the so-called Fobba-liscious crew, a group of Tongan teenagers who enjoy singing, dancing and defying authority. Whatever meaningful observations on race this is meant to convey are lost when you remember (and it's hard to forget) that we're experiencing this not through the lens of a Tongan, but of a white guy pretending to be marginalized. And, if one can somehow detach the racism from “Jonah From Tonga” (one cannot), there is still the other glaring issue with the six-episode season: The incessant stream of dick jokes and exclamations of "homo!" are about as funny as watching a guy run into a wall repeatedly for 37 minutes. After about 10 minutes, you wonder why you’re still watching. (The show was a flop in Australia).

In an interview with Splitsider promoting “Jonah” this week, Lilley (who declined an interview with Salon) showed remarkably little insight into the racial boundaries he supposedly wants to push: “A lot of Pacific Islander kids are in prison in Australia for some reason, I don’t know why, but it’s a problem so I thought it would be cool to explore that idea that he was probably going to end up going to jail. And it seems extreme, the mentality, but it’s how it is in a lot of prisons in Australia with a lot of Pacific Islanders.”

Lilley doesn't seek deeper understanding about the population he's trying to portray, and yet he seems to believe he is accurately portraying them. Part of this "accuracy" includes hiring Tongans, some with almost no acting experience, to play characters in the show -- but what does it mean that the principal Tongan, the one telling us his story, is actually white? He also told Splitsider, “I try to make my shows really accurate. I’ve always been interested in that part of the culture in Australia. I know a lot of people that have been to Tonga ... I get to know the families and I think if they watch it and see how accurate it is, then it’s going to be funny for everyone."

On top of the show's totally oblivious approach, there is the more troubling issue of its use of brownface, that deeply offensive practice in which white men turn skin color into a costume in order to mock oppressed minority groups. Some modern shows and movies, like "It's Always Sunny in Philadelphia" and "Tropic Thunder," have attempted to tackle the taboo of blackface (the same practice as brownface), but they have done so (not without controversy) by making sure to mock people who think brownface or blackface is OK. If you are going to risk offending people with blackface, then the target of your joke should clearly be a white man's ignorance -- not a person's minority status.

Sadly, Lilley's show doesn't even attempt to justify the risks of brownface; it has no self-awareness at all. In a 2011 interview with Vulture over his (also pretty offensive) show "Angry Boys," Lilley actually said that people who are sensitive about blackface are falling into a "trap," and that by portraying it, he's doing something revolutionary:

Part of what I like to do is to push the boundaries and try new things. When I came up with the idea of the boys' heroes on the wall, I thought, Well, they're going to be into hip-hop. They're going to want a rapper to come to their party, so I have to play a black guy. And I just thought, It's going to provoke people, it's going to be headlined — and certainly everyone in Australia fell into that trap. It was all over the place, like, "Blackface! He's doing it!" Like, Australians definitely don't walk around dressed up in blackface going "Ha-ha." We're exposed to American culture and stuff, so we get it. I think I wanted to do it because I thought it was a challenging, new, interesting idea, and mostly I just thought it was a really funny character. I think once you get through 30 seconds of S.Mouse you realize there's more to the character than just a blackface joke. Like, obviously that's not the joke. You see that he's this vulnerable guy who's living at home with his dad and he gets exposed by the documentary for not being the big tough guy he's making himself out to be. There's a lot more going on. It's a character. The funny thing is, I played a Chinese student in "We Can Be Heroes," I played a Tongan boy in "Summer Heights High," and I play a Japanese woman also in "Angry Boys," but the only one that people talk about is S.Mouse. It's kind of funny that there's only certain races that it's an issue — yes, it's that history with blackface — but, I don't know. There's no comparison. I think it's a bit stupid that you would shut yourself off to being able to do that.

Blackface, due to the systematic oppression of black people by pretty much the entire world, rings perhaps a louder alarm for S.Mouse than Lilley’s other characters, but all of his racially based (of which there are many) characters perpetuate stereotypes. You may want to laugh at S.Mouse's antics, but you can't avoid that you're laughing at a garish caricature of a black man whose blackness is supposed to be his most salient quality. That's racist.

The Tongan community definitely thinks so of Jonah, with a Change.org petition asking Lilley to "Cease discriminating against the Tongan Community" that gained nearly 1,000 signatures. "The Voice" contestant Prinnie Steven, of Polynesian descent, spoke out over its original airing in Australia, saying, "I have always despised the stereotypes that society put upon us as Tongans/Polynesian people."

While this show is a greater disservice to Tongans in Australia, this type of caricature is just as harmful in America, where our only mainstream knowledge about the Polynesian culture now consists of Lilley's character. It's disappointing that HBO, a network that is often considered the gold standard of television (and one that is trying to improve its record on diversity), will air "Jonah From Tonga" tonight. It's a step back for this community, as the only thing worse than not being represented on the screen is being represented by a person who thinks he can speak for you.