How one man destroyed the Food Network: Guy Fieri has made culinary TV into a viewer's hell

It used to be full of chefs serenely baking in sunlit kitchens. But now I despise the network I used to love 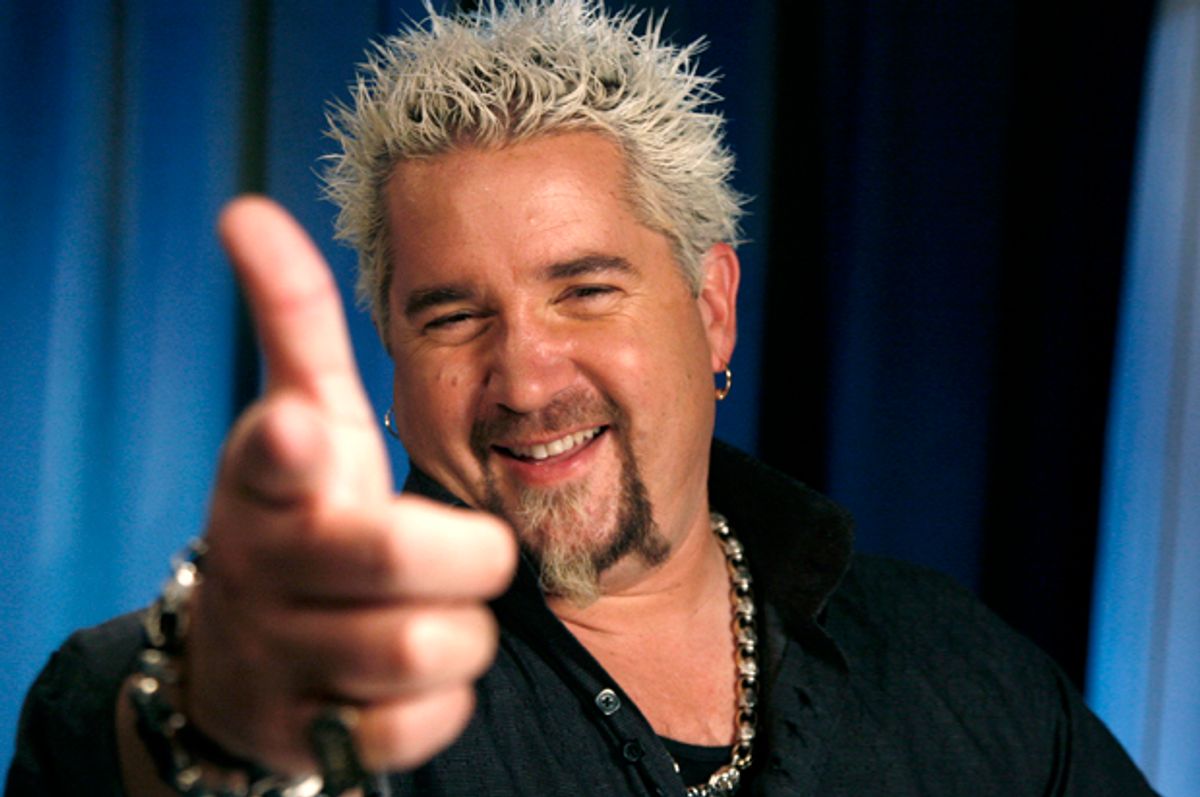 For me, watching the Food Network was always an easy escape from the stresses of daily life. There was just something calming about watching chefs in action, and this network had perfected Zen cooking. They'd often use a natural-light filter that made food appear delectable, as if the chefs were blissfully cooking their culinary delights in the sunlit designer kitchen of a tastefully decorated, impeccable home somewhere in the Hamptons. (Well, with Ina Garten, that actually is the case.) I've never been anywhere near a sunlit designer kitchen in the Hamptons, but I still found it all oddly soothing. I’d even try to time my Food Network viewing to when I was having a snack, as I’m convinced watching fancy cooking shows makes whatever I’m eating taste better.  So imagine my dismay when the very network that used to assuage my nerves after a rough day became one more source of stress.

Let’s break this down. One of my biggest pet peeves is the way local news reporters talk. They deliver news to viewers like we’re all 5-year-olds, with their excessive use of alliteration and disproportionate pauses between words. Guy Fieri has adopted this local-news-reporter intonation and cadence, except Guy is also shouting for some reason. He is incessantly screaming at us to eat concoctions such as beer-battered meatball sandwiches, wrapped in a pizza and deep-fried in lard. What’s for dessert? A sheet cake dipped in pancake batter, dunked in butter frosting and sprinkled with Pop-Tarts. In short, Guy’s trying to kill us. While Michelle Obama campaigns for Americans to make healthier food choices, the Food Network relentlessly promotes Guy Fieri – a guy who wants us to combust via consumption of highly processed inedibles.

Yet, despite being a grown man with a penchant for Billabong clothing, Guy shouldn’t incur all the blame. The real fault should be assigned to the people who gave this madman a platform from which to spout his nutso rants.

The Food Network’s programming schedule should be populated with the pacifying voices of Ina, Martha, Nigella, even Mario Batali. Instead we get Guy Fieri screaming at us to adopt a diet that will at best yield diabetes. I get it – Guy won your first “Food Network Star” competition so you had to give him his own show. Yet, unless I’m mistaken, you only had to give him one show. Instead he is all over Food Network’s primetime programming. Guy not only hosts “Diners, Drive-Ins, and Dives,” very loudly referred to as “TRIPLE D!” -- which seems to run repeatedly from 4 p.m. to 9 p.m. -- but also now appears on at least six other shows on the Food Network. In addition to “Diners, Drive-Ins, and Dives,” Guy can also annoy you while hosting “Guy’s Grocery Games,” “Guy’s Big Bite,” “Rachel vs. Guy: Celebrity Cook-Off,” “Rachael vs. Guy: Kids Cook-Off,” and “Food Network Star.”

And please note how Guy isn’t actually cooking on any of those shows. Considering the slop he tries to pass off as palatable, this is actually a blessing. However, he’s still there, in our face, gorging himself and ranting like an imbecile on fire. Perhaps this is why there has been a mass exodus of genuinely talented chefs, such Jacques Pépin, Sara Moulton, Ming Tsai, Lidia Bastianich and others, to more esteemed networks like PBS. They just couldn’t compromise their brand integrity and personal dignity for the sake of those lucrative Food Network tie-ins.

Just look at the “personalities” that now populate The Food Network - Guy, Rachael Ray, Sandra Lee, Bobby Flay. Did the head of their programming issue a mandate to seek out the most supremely irritating people who may or may not be able to cook decent food to host gimmicky competition shows interspersed with confessional interviews à la “Real Housewives”? And the little “cooking” there is left on the Food Network consists of soul-terrorists such as Sandra Lee bursting with pride because she came up with the ingenious idea of sprinkling some oregano on a can of Dinty Moore Beef Stew and calling it “a quick way to make dinner.” The last bastion of your former self, Ina Garten, might ask, “How bad can that be?” And the answer, Food Network, is: very.

Farsh Askari currently lives in Boston, where he is a research and staff associate at Harvard Business School. He received his bachelor’s from UC Santa Barbara and his master’s from Harvard. He writes a blog about his past struggles with severe OCD, http://ocdmemoirist.blogspot.com/.