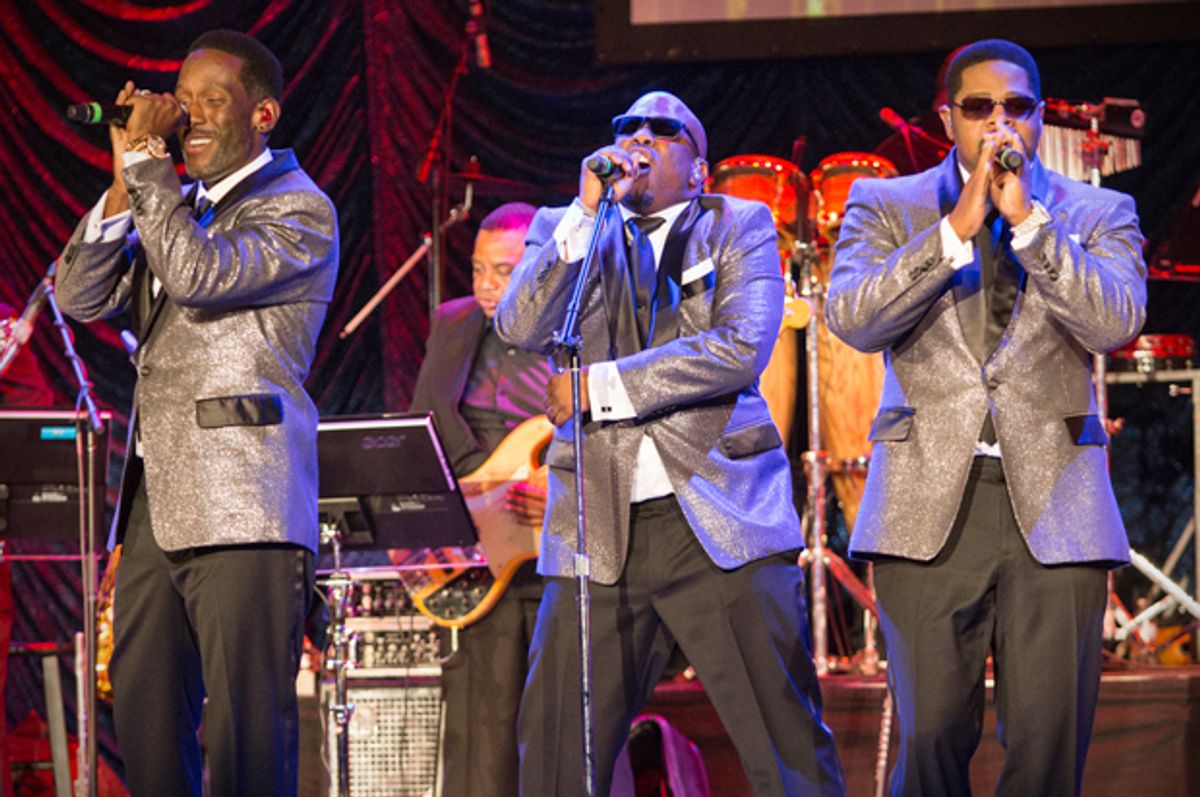 The vocal group is one of R&B’s oldest institutions, and it’s gone through numerous iterations. There’s the doo-wop of the ’50s, and then the glory days of crossover with the imposingly named pillars of the Motown machine: the Supremes, the Temptations, the Marvelettes. These were followed by the ascension of funkier ensembles like Earth, Wind & Fire and the Isley Brothers. In the late ’70s and ’80s, groups weathered the rise of lone wolves—Prince and Janet—and defections: Michael Jackson left behind his brothers for massive solo success, Lionel Richie abandoned the Commodores. Some vocal groups stayed current with harder beats, like the New Edition and Guy, while others, best exemplified by Boyz II Men, embraced the softer side. The last burst of activity came in the late ’90s with TLC, Destiny’s Child and even ’N Sync, who weren’t really R&B, but were informed by longstanding traditions in black pop.

This is America, though, so why share the profits when you can keep them all? There are doubtless teenage fans of Justin Timberlake and Beyoncé who have never heard of ’N Sync or Destiny's Child. The huge stars of the ’00s in America were solo giants, not only in pop—Kelly Clarkson, Gaga, Katy Perry, Adele, Rihanna—but in R&B: Usher, R. Kelly, John Legend. And with the record industry failing, it’s even harder for a vocal group to get off the ground. Few labels want to pay three, four, even five singers when they can just take one and multiply his or her voice. The list of highly respected R&B albums put together in this fashion, including Marvin Gaye's ’70s material and, more recently, D’Angelo's "Voodoo," has made it hard to argue that having multiple singers is intrinsically superior.

But surprisingly, vocal R&B groups have been getting some attention this year. It’s too early to call it a comeback—the three ladies in JUCE have just a few songs to their name, and their English compatriots in M.O. have a small handful. (England tends to be kinder to groups: boy bands sprang back into action over there in a big way; however, they don’t dance, and their music is a long way from R&B.) Jody, a group of guys from Chicago, have released one EP. These acts aren’t doing anything with multiple singers that can’t be done with one singer and technology; but they seem genuinely interested in the group dynamic, and it has resulted in some compelling R&B.

Chalin, Georgia and Cherish, who make up JUCE, made an instant splash with “Call You Out.” It’s got a charming, unpredictable rhythm—the bass moves forward in consistent steps but the drums play a lurchy pattern, maybe influenced by a New Orleans parade. Clean guitar licks and smooth harmonies help clear the way for the hook. The singers become more secure as the song progresses, and the chorus—“If I see what I’m feeling baby believe it, I’m gonna call you out”—is both a promise of honesty and a warning that they’re not gonna take any shit.

The combination of live-sounding instrumentation and a vocal-group approach doesn’t mean that “Call You Out” is old-fashioned. Sure, there’s the line “I can feel the emotion, I got the notion” echoing both Smokey Robinson and the Hues Corporation. But JUCE also use the word “paranoid,” which is very popular at the moment—Ty Dolla Sign has a propulsive hit based around the term; Drake also rapped about paranoia in his song “Wu-Tang Forever” from last year. The way JUCE add and subtract voices at key moments brings to mind the arranging that made Dev Hynes popular, working in his project Blood Orange and collaborating with Solange.

JUCE's “Call You Out” starts with one singer and builds to several; M.O. (Annie, Frankee and Nadine) go the opposite direction, opening “For a Minute” with group harmonies, and then taking turns singing lead. This song also has a rickety rimshot beat driving the action; with gnawing bass and wah-wah guitar, it reaches back to mid-’90s hip-hop soul. The horns offer thick punctuation, sometimes functioning as a fourth vocalist and finishing sentences for the other three. The harmonies become increasingly forceful, with one singer spiraling away from the others for high vocal runs or energetic ad-libs.

Like “Call You Out,” “For a Minute” is a declaration of independence, as well as a rebuttal to a cash-rules-everything-around-me approach to romance: “wine and dine and show me cash, all of that is there just to please the eye.” The songwriting is full of clever wordplay worthy of a Country song, repeated phrases that change meanings—“give it up, cause I ain't gonna give it up;” “you say it's over, over and over.” And the chorus is a pithy mantra, easily committed to memory: “you’ve only known me for a minute.”

Jody, a five-member ensemble from Chicago, take the vocal group in a different direction; where JUCE and M.O. are clean and confident in sound, Jody is cloudy and off-center. The verses can be distorted and tough to make out, though the hooks usually shine clearly. The group contains three singers—Khallee Standberry-Lois, Dave Robertson and James King. Sometimes they channel Bone Thugz and Harmony, the Cleveland rappers who rap-sang in the mid ’90s; on “The Long Goodbye,” they’re more like Boyz II Men; in “Tired,” they reference “No Scrubs,” the massive ’90s hit for TLC.

The songs on Jody’s Soundcloud page—some of which were put out on the "Magique" EP—sound distinctly post-Drake, evoking drift rather than drive. Most of the production is handled by the Drum (Jeremiah Meece and Brandon Higginbotham), who favor slow programmed beats, slinky synth tones and a slightly murky sound. “Floodin,” the second track on their Soundcloud, plays cleaner, but there’s barely any percussion aside from some finger snaps. Most R&B hits right now are built around propulsion. Jody is trying something completely different.

Three groups with a combined 20 songs hardly signal a sea-change in the viability of R&B vocal groups. But there may be an increase in demand for this kind of music tied closely with nostalgia for the ’90s. In May, Complex put together a pyramid of male R&B groups from that decade. July brought a BuzzFeed list of underappreciated female R&B groups.

More importantly, Haim, a group of three sisters, released a highly-praised debut album last year—it leaned more toward rock and pop, but definitely borrowed from R&B as well. They have gone on to play a full schedule of festivals this summer. P. Diddy’s creation Danity Kane, one of the few R&B groups to come together in the mid-’00s, recently reunited, perhaps sensing a change in the climate; same goes for two of the three members of Jade, one of the original ’90s groups. And M.O. and JUCE have both managed to land record deals: M.O. with Universal in America, JUCE with Universal/Island. If these deals and the positive press translate into record sales, a blip could turn into a trend.