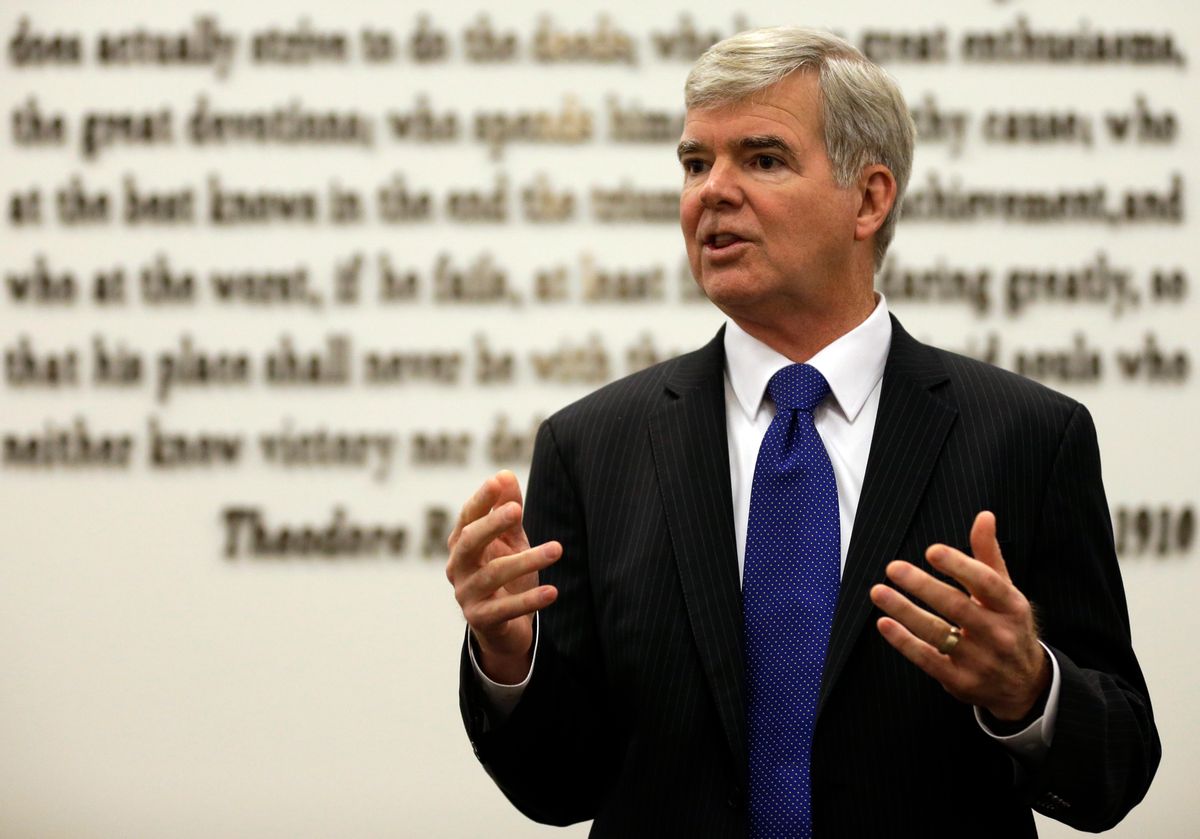 NCAA President Mark Emmert gestures while speaking at NCAA headquarters in Indianapolis, Thursday, Aug. 7, 2014. The NCAA Board of Directors overwhelmingly approved a package of historic reforms Thursday that will give the nation's five biggest conferences the ability to unilaterally change some of the basic rules governing college sports. (AP Photo/Michael Conroy) (AP)
--

Individual players are likely to cash in on only a small portion of that money.

After the NCAA's board of directors voted 16-2 on Thursday to give the five power conferences the ability to establish some rules unilaterally, a handful of university presidents and chancellors unanimously agreed that pay-for-play won't be approved. Instead, the school leaders said they were only willing to expand scholarship limits to provide a limited amount of spending money.

"I think there will be some institutions and conferences that will take a hard look at what that full cost-of-attendance means to them," UCLA chancellor Gene Block said. "But I think the other thing is we'll be able to involve people in the process more quickly and in a more nimble way, and I think it's really, really important that it protects the integrity of the collegiate model."

Current rules only allow scholarships to cover the cost of tuition, room and board, books and fees. The five biggest leagues — the ACC, Big Ten, Big 12, Pac-12 and SEC — have argued that they should help defray additional expenses such as laundry and travel for players' families.

The schools will soon get that chance.

Conference leaders have until Oct. 1 to create a list of rules they'd like to change on their own. All it will require is a majority vote in one of the five leagues, and 12 of the 20 presidents or chancellors on the new, expanded board. An 80-member committee, with one representative from each of the 65 schools and three student-athletes from each conference, would vote on the items. It would require 48 votes and a majority in three of five conferences or 41 votes and a majority in four of five conferences to pass.

NCAA President Mark Emmert said the board will retain veto power if it deems the solutions go too far, though he said that would be rare.

The top priority for most schools: giving athletes a stipend.

In October 2011, the board approved a measure to give up to $2,000 to athletes if their leagues opted in. Two months later, a group of smaller schools gathered enough signatures to overturn the vote, which prompted the big schools to seek autonomy over more items.

Despite the overwhelming vote at NCAA headquarters in Indianapolis, it wasn't welcomed everywhere.

"For those who already think that Division I athletics has devolved into a business that too often dictates university priorities rather than the other way around, it's about to get worse," he said. "These elite programs will bear less and less resemblance to amateur athletics and the mission and role of a university. No one should think it will stop here."

Those who helped draft the legislation insist there are checks and balances to prevent overreach.

"It does provide degrees of autonomy for the five high-resource conferences," said Wake Forest President Nathan Hatch, the board chairman. "This is not complete autonomy. We're still part of Division I, but I think it allows us to provide more benefits to student-athletes."

It's a dramatic new start for an organization that has come under increasing criticism.

Already this year, the NCAA has agreed to settle two lawsuits for a combined $90 million and still awaits a judge's decision on a federal lawsuit in which plaintiffs led by Ed O'Bannon have argued college sports' amateurism rules are anti-competitive and allow the organization to operate as an illegal cartel.

Also pending is a decision by the National Labor Relations Board on whether Northwestern football players can form the first union for college athletes in U.S. history.

The new legislation is intended to give the NCAA's most visible schools enough flexibility to perhaps ward off additional lawsuits.

The transition to a new governing system could begin in January. The five richest leagues will have nearly twice as much voting power (37.5 percent) as any other group on the new council, where most legislation will be approved or rejected.

While there are worries about the growing gap between the haves and have-nots, the smaller conference schools are still angling for a chance to adopt the autonomous rules, too.

"I think that's important to examine," said Wright State President David Hopkins, whose school plays in the Horizon League. "At least we want to have the opportunity to work and choose what we decide (on the autonomous issues)."