Politico has figured out Barack Obama's big problem -- and it's golf 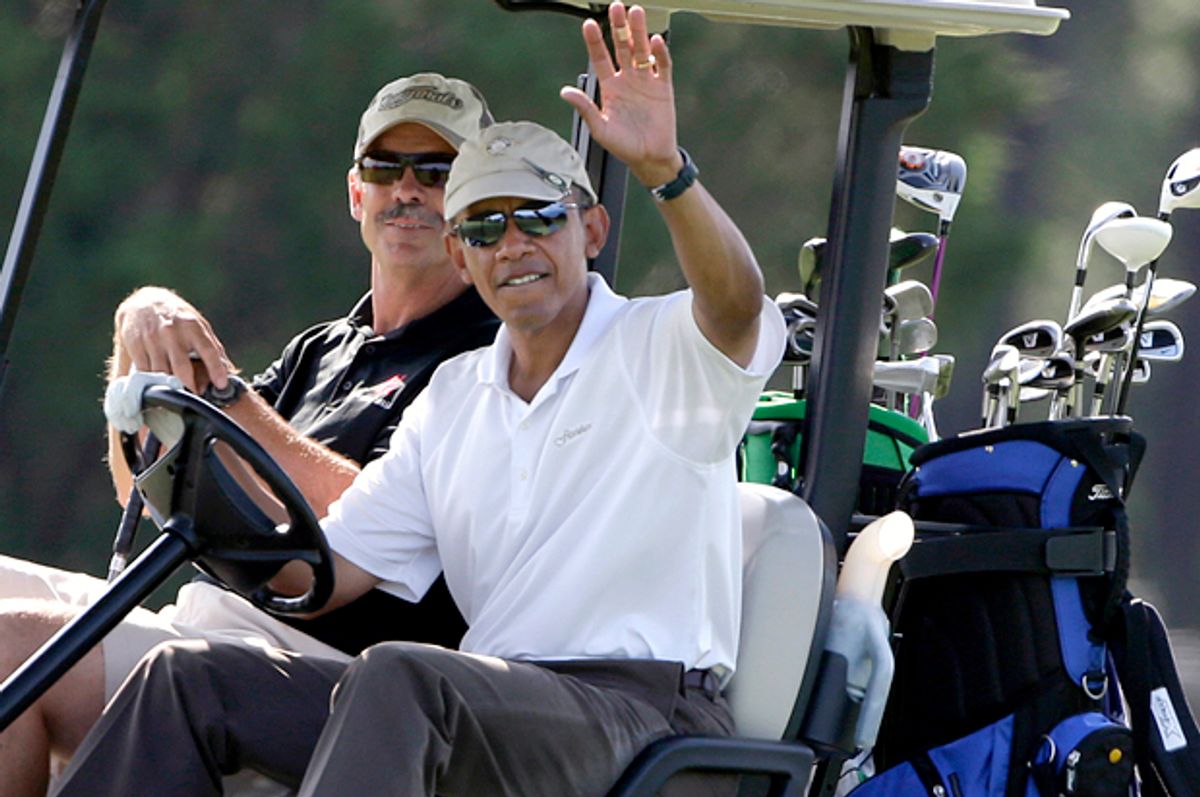 President Barack Obama enjoys playing golf. What does that mean? Reader, it means everything. That's according to Politico Magazine's Michael Hirsch, who spends 24-25 million words today explaining "what Barack Obama’s golf game tells us about his presidency." Welcome to August In The Political Media! No pants required.

Obama famously plays a lot of golf -- mostly on weekends, and about everyday when he's on vacation. That's because golf is fun! This writer, too, plays golf. (I can't afford it, but I'm not very good at managing money, so YOLO.) It's a game that, once you get addicted to it, you try to play during every non-workday or moment of downtime you get, especially when you start showing signs of improvement. And if you're the president, not only do you get to play without long waits or difficulty scheduling tee times, but you get to focus on something else with your buddies for a little while. People have hobbies and Barack Obama's favorite hobby appears to be playing golf, the end.

Hirsch, however, thinks there's a lot more to the president's golfing than a mere enjoyment of the game. After establishing that Obama plays a lot of golf -- again, it's true! -- we are gradually led to the following conclusions about his personality and his presidency:

• He relies too closely on a small circle of advisors. "At a time of unprecedented polarization between the parties—and with no one of sufficient stature out there to bridge the gap—this tells us something about Obama’s 'insularity' (as Van Natta expressed it to my colleague Glenn Thrush back in 2011). He is a president who relies on a small circle of trusted advisers, and he harbors a well-known distaste for hanging with the people he needs to bring over to his side—but has mostly failed to—on Capitol Hill."

• He is disdainful of new ideas. "It’s fair to question whether his isolationism on the course reflects his entire approach to leadership. This president who once billed himself as an intellectual seeker has largely cut himself off, while in office, from new ideas and new discussions."

• He dislikes debates over policy. "It’s not just Congress; he’s distanced himself from his own cabinet. Early on his advocates let it be known that he loves big policy debates. But in fact the big sloppy one that his administration had over Afghanistan—which spilled scandalously into the news in 2009-10—was so traumatic that it turned out to be one of the last. 'He thinks dissent is messy,' says one long-time ally who is familiar with many administration deliberations."

• He rejects outside economic advice. "Even after the biggest economic setback since the Great Depression, progressive economists found themselves cut out, or invited to the White House once or twice for pro-forma dinners but never again—an experience not unlike Obama’s one-off golf game with Boehner."

• He does not know how to work with political opponents. "Thanks in large part to his sudden and meteoric rise, Obama also never had to learn the basic skills of socializing with his political enemies."

• HE REFUSES TO LEAD, DAMNIT. "The problem is that this president doesn’t seem to possess the skills or the desire to get enough votes—full stop. He certainly hasn’t tried very hard to woo wayward members of the opposite party, as many presidents before him have done. And he’s certainly not going to make much progress by spending five hours a day addressing a little white ball—and no one else—on Martha’s Vineyard."

But it's clear why he can't close deals with John Boehner on the golf course: because that's not how contemporary politics works! Hirsch naively writes about how LBJ used to close deals on the golf course, so why can't Obama? That's because Lyndon Johnson was president in the 1960s, when (a) the country wasn't as polarized and (b) there wasn't as much media surveillance over Washington's every doing. "Back room deals" on high-profile legislation don't exist anymore, because there's no such thing as a back room in which to hide anymore, and members of Congress no longer follow their leaders' orders in lockstep. John Boehner and Barack Obama don't need to play more rounds of golf together in order to better understand each other's thinking. They understand each other pretty well already and have determined that their political incentives very rarely line up.