Rise of the phone zombies: What we lose when technology gives us everything

There's no doubt that we're more connected than ever before. And sometimes that's great — but it comes with a catch 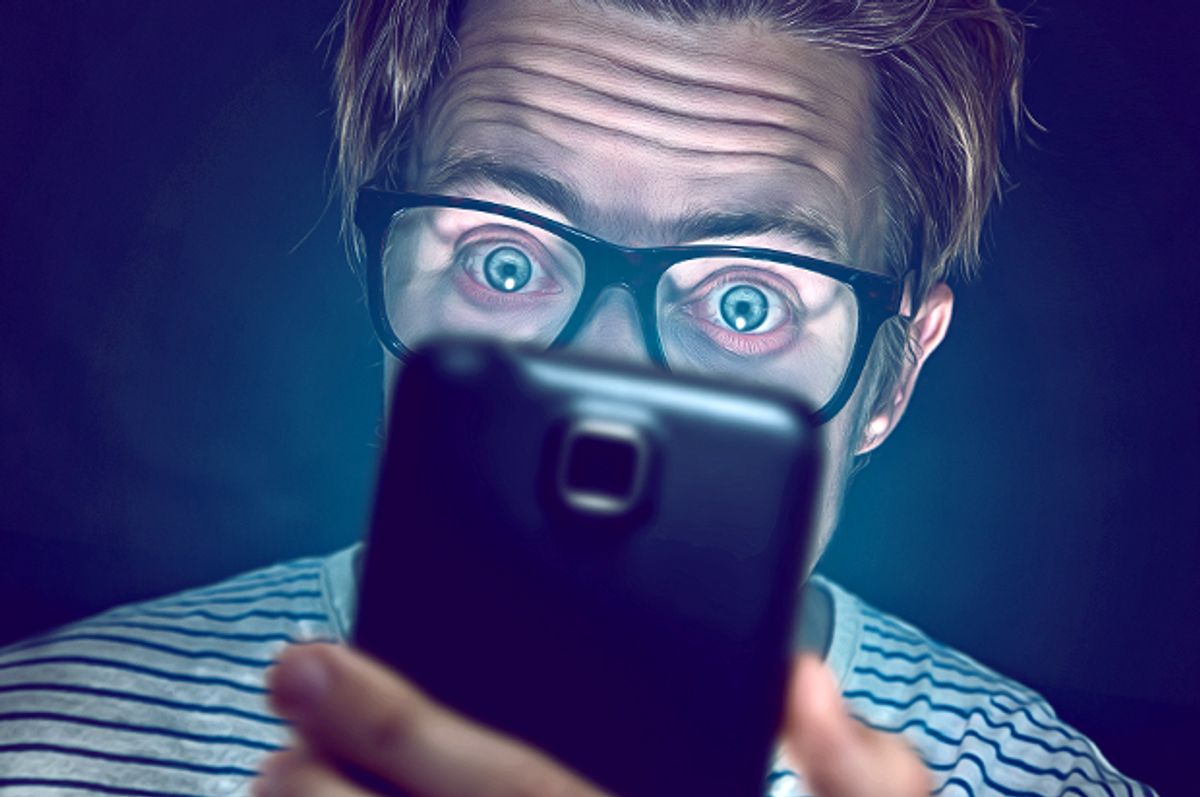 As we walk to a café in the heart of San Francisco's Mission District, Dan Hoyle tells me that his one-man show, "Each and Every Thing," has just been extended for a second time, until Oct. 4. The news confirms what I already suspected: Hoyle is the right man in the right place at the right time. His hilarious, moving and inspirational critique of our smartphone-centric lifestyle feeds a desperate hunger for meaning acutely felt in the exact neighborhood we are strolling through. We love our new technology in the Bay Area, but we're also getting more than a little alarmed by it. What exactly are we doing to ourselves as we submerge ecstatically into the screen? Is this really how we want to live?

We sit down at a sidewalk table on Valencia Street, a block away from the Marsh Theater, where Hoyle has been performing in front of sold-out audiences since June. Next to us, a couple of tech bros are talking about content management systems. Beneath Hoyle's chair, the word "gentrotech" is stenciled on the sidewalk, embellished with an illustration of curved devil's horns. It's not hard to guess that the street art is a product of endangered indigenous inhabitants irate at how rapidly the Mission is changing.

The political and economic transformations precipitated by the latest wave of digital innovation provide the cultural backdrop for "Each and Every Thing." But the essence of Hoyle's show is the search for something more ineffable -- real human connection, the kind built from eye contact instead of Facebook likes -- in a world in which our behavior in public space is increasingly isolated and isolating. We've all seen what Hoyle's talking about: a couple out for a date both staring down at their phones; pedestrians locked so deeply into Facebook or Twitter that they barely avoid bumping into each other; a subway car in which every single commuter is thumbing his or her way through Instagram or Imgur or Candy Crush. Phone zombies, everywhere, a plague of the digital undead that swept across the world before we fully realized what was happening. (Because we were too busy playing with our amazing smartphones!)

The miracle of "Each and Every Thing" is that in just 75 minutes onstage, inhabiting a dozen or so characters, from Aryan Brotherhood muscle heads to Chicago drug dealers to Indians sharing coffee and conversation in Calcutta, Dan Hoyle manages to create the very sense of human connection that he yearns for -- with his audience. He doesn't hector, he doesn't lecture, and except for one very funny moment about two-thirds into the show, he doesn't get angry (aside from when he's depicting the aforementioned Aryan).  He follows the cardinal rule of great narrative; he shows, he doesn't tell. And as he shares his own story, the life of a performer whose highest artistic goal is to get to know people on a deep level and share their stories, he enacts his message.

"Each and Every Thing" is a true story. The characters Hoyle inhabits are real people that Hoyle has met-- including his best friend, an Indian-American software developer. Hoyle uses these characters  to illustrate his  personal journey to understand himself as an artist, sandwiched around the disruption caused by the smartphone, which inhibits all of us from understanding ourselves and each other.While turning a critical eye on contemporary digital mores, Hoyle makes it clear that we need to find a new balance between our machines and the people around us, and, in the process, he demonstrates just how to adjust the scales. It's a bravura performance, and so very, very necessary.

It is an inescapable irony of our contemporary existence that less than 24 hours after I saw "Each and Every Thing" -- a show in which Hoyle not only asks everyone to turn off their phones, but tells us that he hopes we keep them turned off for an hour or two after the show -- we're connecting directly, for the first time, via Facebook. But Hoyle is unbothered by what could be deemed a trifle hypocritical. He loves technology as much as the next 34-year-old raised in San Francisco (and currently living in New York). He's not opposed to social media, in principle. He owns a smartphone.

But he's convinced that the emergence of that smartphone as our default interface with basically everything has altered something significant about how we behave when in public.

"It's one thing when we're all alone in our homes, connecting online," says Hoyle. "But when we're out in public checking in on our phones, we are creating new private spaces in the public arena."

"Something has changed. You have five minutes to kill, and instead of looking around, maybe having some random conversation with a stranger, maybe just sharing some glances ... we're looking at our phones. I think these new technologies enable a level of self-isolation that's greater than ever before."

It all makes sense, says Hoyle, quoting a line from his show, because "reality is awkward ... And life through a screen is less awkward."

Anyone with a bare minimum of self-awareness can appreciate Hoyle's critique. I tell him that ever since I've owned a smartphone, I've stopped reading magazines off the rack at the local grocery store, but I've also started feeling increasingly guilty about that behavioral modification. Not just because the collective impact of people like me on off-the-rack magazine sales has been devastating, but because I wonder how alienating it must be for the cashier to see a long line of people staring down at their phones, only raising their eyes when it is time to pay. And yet, on those rare and horrible occasions when I forget to bring my phone with me, I feel destitute, at the mercy of an unforgiving universe.

My observation gives Hoyle a chance to preach a little, to spread a gospel of connection that is quite different from Mark Zuckerberg's fantasy of a connected world.

"So when I'm in a situation like that, waiting for someone, or waiting for a train, I say to myself, hold on a second. I people watch. I look around: Are there any new stores in this area? What's changed? All of a sudden, as opposed to it being dead time, I am practicing my observational skills. We have all these tools to document our experience, and yet so much of it is deployed to perform that experience on social media. All the pictures we share on Instagram -- instead of being experiences that we process, and that go into our creative funnels -- they just become something that that we perform for other people online."

"And then we're like, how many likes did we get?"

I suggest to Hoyle that most people are not willing to go to the lengths that he does to establish relationships with drug dealers and scary Aryan dudes. Yeah, yeah, he acknowledges, and says again, "Reality is awkward." He also concedes that for people who are naturally shy, the Internet has been "a revolution in the way that they can connect with the world."

"But I think the place where we need to be worried is when we are never forced to challenge ourselves socially -- or at least forced to engage on some level with other people's realities just a little bit. There are all these studies that are coming out that suggest that when we have these devices in front of us, we are less able to listen to people, we are less able to be empathetic. And we're not allowing our brains the idle time that is the spark of creativity. I think finding a better balance is something worth fighting for."

Hoyle says the genesis of the show grew out of a project in which he was interested in exploring the decline of newspapers. But he soon realized that "the revolution in how we experience everything in the world wasn't just influencing the news media, it was happening everywhere."

"And then I had to ask myself, 'Why do I care so much about the disappearance of ourselves into our screens in public space?" Well, it's because I've been trying to create something else for my whole life."

That "something else" is the necessity and value of connecting with people at a deeper level than is possible via Twitter, or the "yelpification of every experience," that isn't supported by what Hoyle describes in his show as "the cocoon of earbuds, the never-bored safety of the smartphone."

The opportunity to never-be-bored is an intoxicating, addictive thing, all the explanation we need for the astonishing rapidity with which smartphones have conquered the world. But that very rapidity has had unforeseen consequences, not least of which is we haven't had the time to adapt to our new tech. Social habits do not evolve as quickly as mobile operating systems. When tech moves more swiftly than our capacity for understanding the implications of that tech, it can be destabilizing. But it creates a fantastic demand for artists who can step outside the moment, see what is happening, and craft a moral and aesthetic response.

Hoyle's ability to do so while provoking belly laughs, his skill at venturing perilously close to territory that he calls "hippie shit" without losing himself in the vacuity of be-here-now stonerhood, his success at bringing the audience so deeply into his own world that he leaves us all imagining that, you know what, we can do better, we can live fuller, more intimate lives, we can share eye contact instead of retweets, is a remarkable thing. The more exposure it gets, the better. (After his run in San Francisco is finished, he will perform "Each and Every Thing" at Joe's Pub at the Public Theater in New York.)

As we shared our perceptions of the digital lifestyle on Valencia Street, as tech commuter buses rolled by and tourists scurried past, staring more closely at their phones than at the city around them, Hoyle told me he hopes, now that his show has been extended, that Facebook's Mark Zuckerberg and Twitter founders Jack Dorsey and Ev Williams come to see it. Here's hoping that they find the time. The people who are building these tools need to understand their implications even more than the people who use them. And maybe the most encouraging thing that "Each and Every Thing" tells us is that we do have the capacity to catch up to change, and think it through, and decide for ourselves how to be in this world.

Tickets to "Each and Every Thing" can be purchased here.