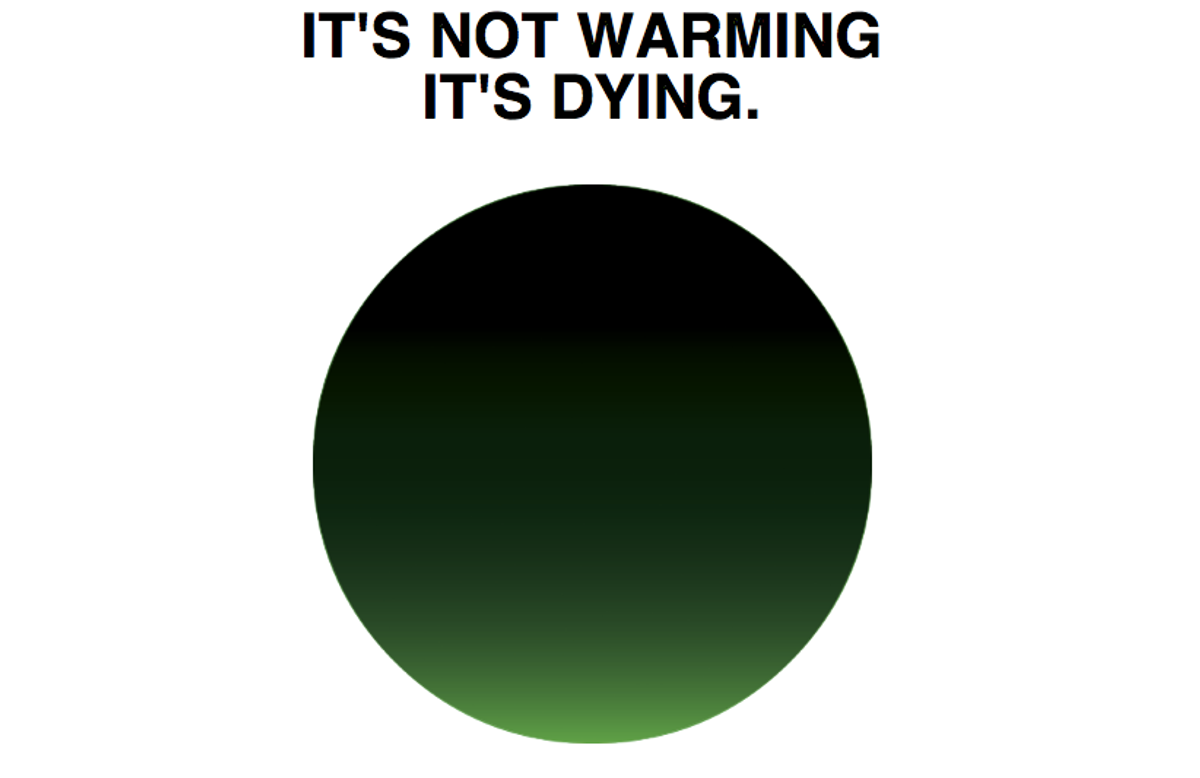 Milton Glaser is famous for uniting New Yorkers under the simple, iconic "I Heart New York" logo. (He also designed the label for Brooklyn Brewery and, as I learned on a recent tour, had the good sense to emphasize the beer's borough of origin back before it was cool.) Now, at age 85, he's out to rebrand the climate movement. The pitch: a hazy black circle with just a small band of green (read: Earth), which people can purchase and wear as a button. In a poster hung on the exterior of the New York School of Visual Arts' East 23rd Street building, the logo is accompanied by the slogan "It's not warming, it's dying."

The obvious problem, right off the bat, is that Earth is warming: It's done so rapidly over the 20th century, and is expected to continue at an even faster rate over the next 100 years. The world's governments agreed that we should try to limit warming to below 2 degrees Celsius (3.6 degrees Fahrenheit) above pre-industrial levels to try to avoid the worst consequences of that warming, yet we're on track to blow right past that limit. While Glaser obviously agrees that this is a problem, the slogan obscures that point. And as someone attuned to the world of climate deniers, I can't help thinking that getting the hashtag #itsnotwarming to go viral might not have the intended effect.

But those are technicalities. Glaser told WNYC's Brain Lehrer that his problem with the word "warming" is that it "sounds reassuring and comforting." So if your complaint is that the slogan sounds overly pessimistic, well, that's kind of the point. "Either Earth is dying or it's beginning to grow again," Glaser explained. "My preference would be that it was beginning to grow again, but for the moment I have no evidence of that."

He's puzzled, he continued, by the way that climate negativity is rejected by people who, out of self-interest, would rather think everything is going to be fine; he argues that we need more negativity to drive home the fact that, barring a collective effort to change our greenhouse gas-emitting ways, it might not be.

Meanwhile, it's not the slogan but the image, he said, that's the most important part of the campaign: people have suggested that the black could represent oil, or pollution, or death, but he sees it as symbolizing "the end of green." Wearing the button is an acknowledgment that this is happening, he said, and "the acknowledgment itself produces change." If enough people openly sport their concern, in other words, maybe the people in power will no longer be able to deny that this is something to be concerned about.

Coming as it is from a very dark place, Glaser intends the message to galvanize. The trick is just  to do that without inadvertently inducing defeatism instead. "If one is looking for a purpose and theme to their life," he told Dezeen, "avoiding the worst event in human history is a good place to begin." That's slightly more inspiring, at least, than announcing that we might be fucked.