If even legal action on immigration will enrage Republicans, the president must avoid it. Here's why that's wrong 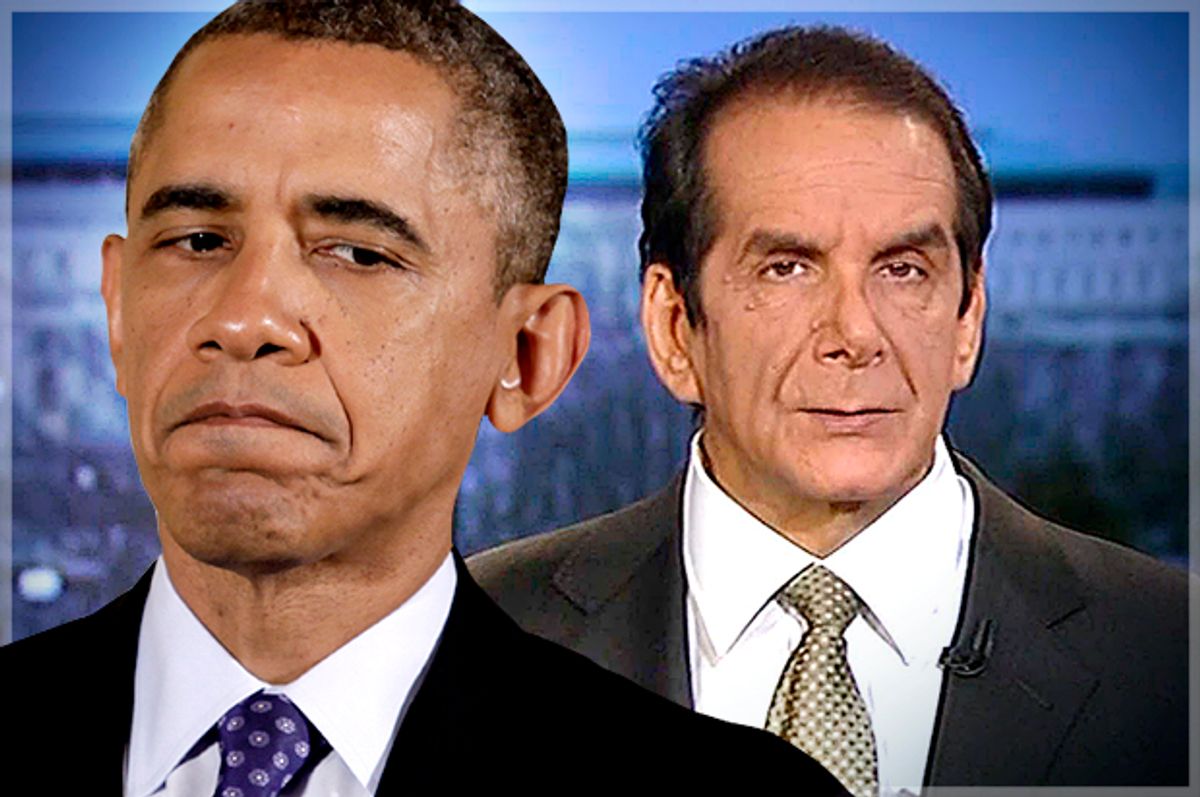 Every once in a while, those of us who were slow to board the magical Barack Obama 2008 Hope and Change Express get to say “We told you so,” and then go back to work. This is one of those times. Forgive me.

As Ezra Klein insists Obama has achieved success only by “breaking American politics,” and Ron Fournier tells us “the fundamental reason he became president was he was promising there’s no red state, there’s no blue state, I’m going to bring the country together,” people who resisted candidate Obama’s wispy, post-partisan rhetoric back then shake our heads and feel a little bit vindicated. Personally, I have to say: I hate being vindicated (on this, anyway). It would feel so much better to have been wrong.

Somebody broke politics, but it wasn’t Barack Obama -- and yet he gave his enemies plenty of evidence to frame him.

Even President Obama has to regret some of his 2008 rhetoric, which partly blamed the Clintons for the right's vengeful crusade against them, as pundits use it to claim that he not only broke politics, but that he will actually deserve the blame if Republicans impeach him for doing his job. Journalists still blame Democratic presidents for the unhinged behavior of Republicans.

Exhibit A is an allegedly “balanced” Wednesday Fox News panel where the non-right-wingers – journalists Fournier and A.B. Stoddard – joined conservative Charles Krauthammer in suggesting Obama could be responsible for his own impeachment, if he goes ahead with an executive order deferring deportation action on the parents of children who already enjoy deferred status. (Krauthammer called the move “impeachment bait” in Thursday’s Washington Post column.)

But the reaction of Stoddard and Fournier is worth breaking down in detail. (Thanks, Daily Caller, for capturing it.)

“If President Obama goes too far on this — whether it’s within his legal right or not — the outrage will be so incredible on the Republican side, it will probably bring more Democratic losses this fall,” the Hill’s Stoddard began. “Because I don’t know that Latinos are going to turn out this fall as a result of this issue. But it also could become a constitutional crisis.”

So it’s a bad move, "whether it's within his legal right or not," because a) it might not work politically and b) “it could also become a constitutional crisis.”

Let’s assume for a second that legally he can do this — just stipulate that, just for a second. Should he do it?  Even if you agree, like I do, that we really need to do something about these 12 million people who are in the shadows, even if you agree that it is legal, I still think there is an argument to be made that he should not do it.

OK, let’s stop there. The president shouldn’t do something to ease the immigration crisis, “even if you agree that it is legal.” Why is that? Fournier has a quick answer:

“Because the fundamental reason he became president was he was promising ‘there’s no red state, there’s no blue state, I’m going to bring the country together.’ He’s been a polarizing president.”

I’m not sure what qualifies Fournier to pronounce “the fundamental reason” Obama was elected, either in 2008 or 2012. Some people may have indeed admired his post-partisan rhetoric. But speaking as a two-time Obama voter, many of us wanted to see healthcare reform and less income inequality. Many members of the Obama coalition, who make less than $50,000, wanted economic relief from the Bush recession and the 30-year downward economic spiral that began under Ronald Reagan. Many of the Latinos who voted for Obama very much wanted immigration reform.

The political desires of the Obama coalition don’t much concern Fournier. “This would be a nuclear bomb that would blow open and make this country even more divided,” he warned. “In a way that most Americans just don’t want.”

In case you missed his point, Fournier followed up his Fox appearance with a whole column elaborating on it. The headline sums up the wrong-headed argument: "Even if reform is needed and legal, endowing the presidency with new, unilateral powers is a dangerous precedent."

Obviously if reform is “legal,” then it wouldn’t endow the presidency with “new, unilateral powers.”

Kevin Drum boils the argument down to this: "President Obama shouldn’t do anything that might make Republicans mad."

It really is that simple. If you grant, as Fournier seems to, that the president can legally change deportation priorities, but you think he shouldn’t, because it will further divide the country and Republicans will use it as an excuse to impeach him, you’re granting irrational people control of the nation. This is largely what happened during the debt ceiling crisis of 2011, but that time, Obama was listening to the Fourniers and Stoddards of the world, and trying to both be bipartisan, and also to appease the crazy Tea Partyers who would blow up the global economy rather than raise the debt limit.

That only enabled the crazies, who were being coddled by supposed moderates like Senate Minority Leader Mitch McConnell, who crowed approvingly that his party’s right flank proved the debt ceiling was “a hostage worth ransoming.”

So we know Republican leaders aren’t going to stand up to the party's far-right base. And we know Krauthammer is going to accuse the president of creating a constitutional crisis to turn out his base for the midterm elections, because that’s Krauthammer's job. But it would be nice if writers who don’t identify themselves with conservatism could describe this dynamic, maybe even critique it -- not become part of it.

For the record, I can’t say conclusively whether the executive action the president is pondering is “legal,” and neither can Fournier or Krauthammer. (They both rely on Obama's own previous statements denying that he has such powers; so he was right then, but he's wrong now?) Anyway, it’s a perfectly legitimate point to debate. But I feel confident in saying that the enormously cautious Obama, who is sometimes too cautious for my taste, won’t do it cavalierly – not to turn out his base in November, and certainly not as “impeachment bait.”

The right is setting an impeachment trap for the president, and the media are starting to play along.