When Superman and Wonder Woman had sex in the sky: The hottest comic book romances 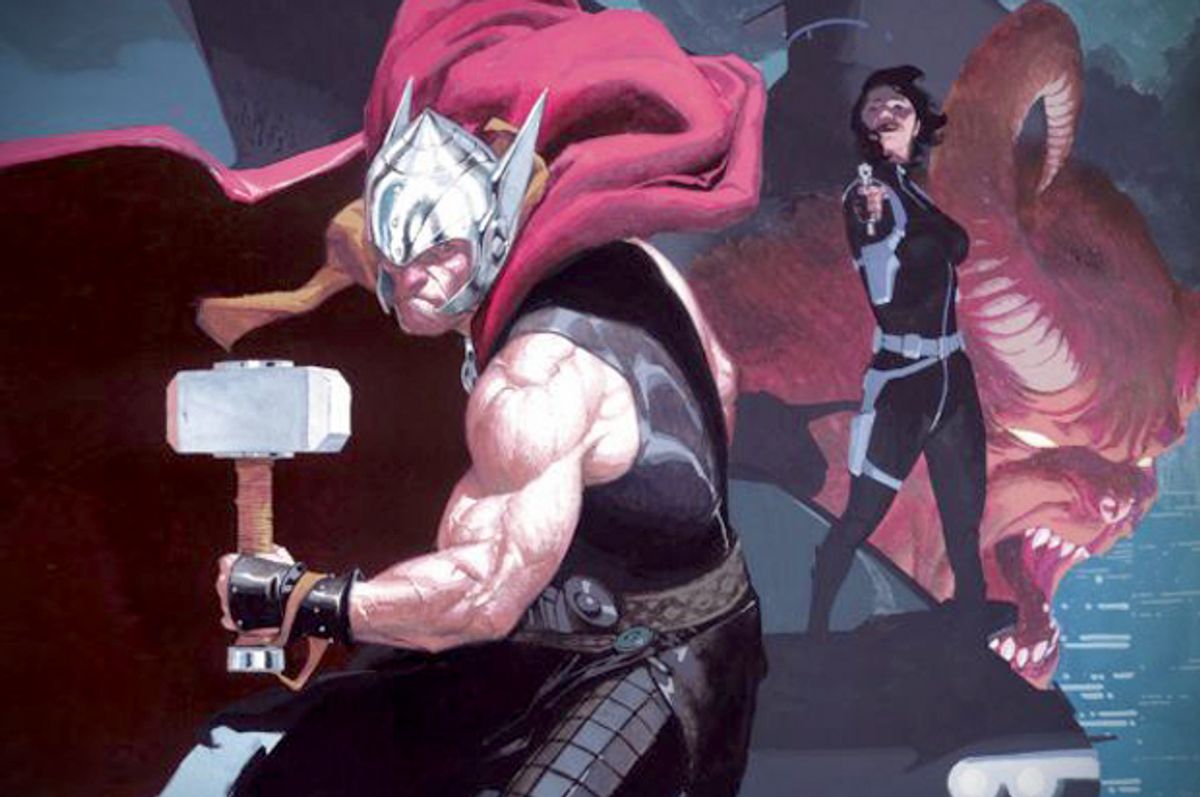 Why do you read comics? To see Batman beat up a clown, Galactus eat a planet or zombies eat everybody? Or to see superheroes fall in love with each other?

Romance comics, as a genre, don’t take up much shelf space these days, but the worlds of superheroes, aliens, criminals and gun-toting raccoons feature plenty of love stories, and they always have. Superman and Lois Lane have had a will-they-or-won’t-they relationship for almost 80 years. Peter Parker has married Mary Jane, had that marriage wiped away by a deal with the devil, and seen his other love Gwen Stacy die at the hands of the Green Goblin. Garth Ennis and Steve Dillon’s “Preacher” — soon to be an AMC series — featured perhaps the best comic book romance of all time, between avenging man of faith Jesse Custer and sharp-shooting Tulip O’Hare. Even if you’ve sworn off dating and would rather fall in a Sarlacc pit than love, a comic book romance can be hard to resist.

In the spirit of such colorful love, here are some of the best love stories currently happening in comics. They prove that sometimes Thor’s hammer is the best way to deliver Cupid’s arrow.

In “Saga,” Alana and Marko are pretty much the Romeo and Juliet of comics in the colorful sci-fi universe brought to life by writer Brian K. Vaughan and artist Fiona Staples. Marko is part of a horned race from Wreath, a moon that orbits Landfall, home to Alana’s race of winged folks. This ancient blood feud has dominated the galaxy. Alana and Marko met when Marko was a prisoner and Alana was a guard. After bashing him in the head a few times with her gun, they eventually fell in love, and she helped him escape. They — and their baby — have been on the run since issue 1. I defy anyone to not root for this couple; they are funny, real and sympathetic, which makes their marital problems in the current arc almost too much to take. Damn you, Brian K. Vaughan!

This romance has been slowly simmering since the beginning of Mark Waid’s wonderful run on “Daredevil.” As the series started, assistant district attorney Kirsten McDuffie often teased Matt Murdock for not admitting what had been leaked in the tabloids: that he was Daredevil. Since then, they’ve dated, broken up, reconnected and moved to San Francisco together after Matt finally admitted his superhero status to the world. The blooming of this romance has been fitting, since Waid — and astounding artist Chris Samnee — have abandoned the noir gloom and chronic depression of previous Daredevil runs in favor of swashbuckling adventures.

“Alex and Ada” is an Image comic, set in the not-too-far-off future, about a lonely guy coming off a breakup and a realistic, intelligent, beautiful android given to him by his grandma. As sleazy as that sounds, “Alex and Ada” shines a surprising amount of light on real relationships, much like the Buffybot episode of “Buffy the Vampire Slayer.” What happens when one person does nothing but try to please the other? How “real” can you make a relationship without screwing up what worked during the initial stage? And what’s so great about sentience anyway? This series has a lot to say about relationships and science, and it’s also funny as hell with clean, understated, lovely artwork by Sarah Vaughn and an ever-twisting story by Jonathan Luna.

This couple is probably the closest we’ll ever get to seeing Batman and Commissioner Gordon getting it on. The new Batwoman (new as in last 10 years) is Kate Kane, a brilliant character developed by Greg Rucka and J.H. Williams, who was thrown out of the military for refusing to lie about her sexuality and then became a Bat-themed avenger with the coolest-looking costume in the multiverse. Maggie Sawyer is a cop who traded shiny happy Metropolis for grim and gloomy Gotham; she’s appeared in many Superman and Batman comics over the years, including “The Wire” of comics, “Gotham Central.” Though DC Comics famously (and stupidly) put the kibosh on their marriage, the relationship continues, and it’s impossible not to root for a couple that has even their own publisher against them.

Only in comic books can the survivor of a doomed planet become an all-American hero, and comics are also the only place you’ll find a match this perfect. Tony Chu and Amelia Mintz possess perfectly complementary powers in the bizarre, giddy, violent, absurd world of John Layman and Rob Guillory’s “Chew.” Tony Chu is a cibopath, which means he gets psychic impressions of everything that happened to what he eats, whether it was a carrot, a chicken, or — as is often the case in his line of work — a murder victim. You can imagine how that would make you a picky eater. Amelia is a saboscrivner, which means she has the power to write about food so vividly that she can make you actually taste it. For poor Tony, who can only eat beets without experiencing the dietary version of TMI, Amelia is a godsend.

The lead characters in Matt Fraction and Chip Zdarsky’s “Sex Criminals” are another pair perfectly matched in the superpower department. Unlike Tony and Amelia, who have complementary powers, Jon and Suzie have the same power: they can literally stop time when they orgasm, which leads to knocking over a bank (for altruistic reasons, really) and running into some kind of sex cops who are onto their hijinks. As ridiculous as that may sound, their relationship might be the realest in comics, and it’s not all lust and larceny.

In DC’s New 52 universe, which is just a few years old, the Superman/Lois Lane romance is on the back burner; the oldest male superhero and the oldest female superhero have been, as Opus the penguin might put it, making serious snugglebunnies. It’s hard to say how long this will last, but for now it seems fitting that the mom and dad of all superheroes are playing house at the Fortress of Solitude. For a similar romance, check out Kurt Busiek and Brent Anderson’s creator-owned superhero world of “Astro City,” whose analogues of Superman and Wonder Woman — Samaritan and Winged Victory — are also coupled. Bonus: You get to see those two doing it in the sky naked.

You know Thor — big blonde beefsteak, son of Odin, Avenger, etc. Roz Solomon is an environmental scientist and agent of S.H.I.E.L.D. Though the two are far from an official couple, Thor constantly helps out on Roz’s missions, leading to Roz being teased about her “boyfriend” by everyone from Agent Coulson to She-Hulk. It’s freakin’ adorable, as are Thor’s very Thor-y pick-up lines, such as “Agent Solomon, I’ve brought you the largest mountain in all of Jotunheim. Might that finally be enough to win your company for the evening?” Like everything about Jason Aaron’s run on “Thor,” this relationship has been stellar. Could Roz be the woman who ends up holding the hammer and power of Thor?

In Jonathan Hickman and Nick Dragotta’s sci-fi Western “East of West,” everything is mythic, but nothing more than the doomed romance of Xiaolian and Death. Yes, Death, as in one of the Four Horsemen of the Apocalypse. At the beginning of the series, Death mistakenly believes that his wife is dead, but she’s just been imprisoned and be-handed by her shitty family, who rule New Shanghai, one of the Seven Nations of America. The series begins with Death searching for vengeance, then for Xiaolian, who turns out to be very alive — and also vengeful. That’s just the beginning of the story for these two, who have a stolen child, a prophecy, six other nations and three other Horsemen of the Apocalypse lined up against them. You know, like most couples.