Can't we disagree with each other without comparing people to genitals? Yes, we most certainly can! 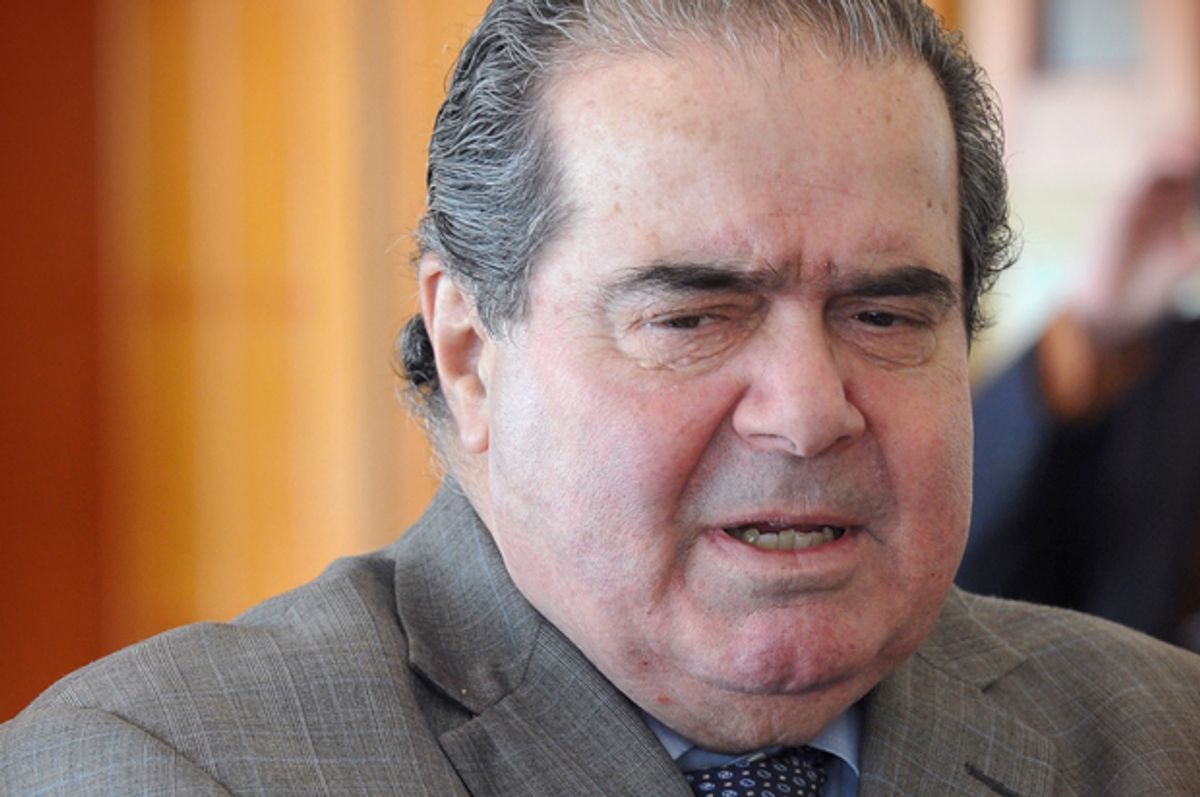 In the days following the Supreme Court’s decision in Burwell v. Hobby Lobby, I repeatedly saw a word being used on social media by people who, like me, were outraged: “Scrotus.” This is a play on the acronym SCOTUS—Supreme Court of the United States—a metaphor, if you will, in which the five (male) justices who joined in the majority opinion become a single scrotum.

My first response was to feel that the scrotum is more demeaned by the insult than the Supreme Court justices. My next response was and still is to lament the use of the term altogether. Of course it is misogynistic to use names for women’s genitals—pussy, twat, etc.—as insults, not only because there is nothing intrinsically cowardly or mean about a vagina, but because to refer to women’s reproductive organs demeaningly is to join a long history of the systematic oppression of women. Though not charged with the woeful power dynamics of misogyny, using the names of male reproductive parts—dick, schmuck, etc.—is hardly less problematic. Finding much to admire in genitals of all stripes, I’ve grown weary of the prevalence with which their names are invoked in antipathy.

I have also come to object to non-genital name-calling-as-insult. Asshat, bitch, fuckwit, garbage, idiot, moron, shithead, vile bag of worms: I’ve seen all of these insults used recently on the Internet by people whose politics I basically agree with—namely, progressives. My understanding of progressive politics is that they are based in compassion. And when we call someone an asshat or an idiot or a worm, we are asserting, metaphorically, that this person is in a different, lesser category than ours—either inhuman, or still human but lower in the hierarchy of being. And if you are a progressive—if you are anyone, for that matter—this is an unproductive, indeed, a destructive assertion to make.

I can imagine people saying, in response to the above: 1. What, you’ve never called someone an insulting name, even in your head?; 2. Lighten up, it’s just a joke; 3. Why are you going after fellow progressives for a minor offense like uttering an insult when the bigger offense is, for example, the Supreme Court decision you mentioned that restricts women’s access to reproductive health care?

1. Of course, we have all called people names. And I confess that despite my emphatic belief in the destructiveness of name-calling, I sometimes have difficulty refraining from it. But I try to, because words matter.

2. I happen to love jokes. They make life more bearable and they can be profound tools of political opposition (see below). However, the implication of dismissing an insult with “Lighten up, it’s just a joke” is that it doesn’t really mean anything. But if it doesn’t, why say it? The premise of both a Supreme Court opinion and an insult is that words have power.

As I’ve been meditating on the name-calling problem, I’ve also been thinking about and looking for examples of oppositional political speech that I admire and consider effective, and that do not entail name-calling. Thankfully, they are abundant.

Last week, for instance, I saw a clip of an MSNBC interview with two people in Detroit about the city’s having shut off water to thousands of people who can’t pay their water bills. One of the interviewees was Hank Winchester, a reporter for the local TV station WDIB; the other was Maureen Taylor, chair of the Michigan Welfare Rights Organization. Winchester claimed that while some people were unable to pay for their water, there were others “who simply don’t want to pay the bill, who’d rather spend money on cable.”

Taylor replied, “Shame on Hank for putting that lie, that disinformation out on the air. Saying that people don’t want to pay for their water bill is scandalous. What is at stake here is that there are thousands of people who cannot pay rising water bill costs, and we’ve got people out here like this guy standing on the side of the people that have money.” She added that the city had not shut off the water to sports stadiums and golf courses whose water bills remain unpaid.

The MSNBC anchor asked Taylor, “What would you like to see happen, Maureen?”

She replied, “I don’t want to tell you what I would like to see happen because I don’t want to speak those words. But the next time you invite me here, let’s have some truth, and a fair exchange, instead of Hank who doesn’t know what the hell he’s talking about gobbling up all the time.”

The restraint of this woman who has spent more than 30 years advocating for the poor in one of America’s poorest cities was impressive, and her righteous indignation was relevant to a situation in which her interlocutor was peddling on national television the tired old story that poor people remain poor because they spend their money unwisely.

As for the political use of jokes that I mentioned earlier: My new favorite example of speaking jokes to power comes from The Onion in a fake news video that begins, “George W. Bush may be retired from politics but he’s been keeping busy with his new hobby of painting. Today the Picasso in Chief tweeted his latest picture, a turkey sandwich and a glass of lemonade in front of the ghost of the Iraqi child who follows him everywhere.” The actresses in the Onion video give pitch-perfect deadpan performances as perky news reporters, while images flash on the screen of Bush’s increasingly bloody, ghoulish and surreal paintings. “He’s even started painting in his sleep,” one of the newscasters smilingly says as the video shows an image of Bush’s Crawford, Texas, ranch with a child’s enormous screaming mouth painted around the front door. I am consoled by the ferociousness of this joke that blends Bush’s nonfictional painting hobby with a fictional scenario in which he actually expresses responsibility for the killing and mayhem he unleashed in Iraq on false pretexts.

Finally, here is an uplifting response to a different SCOTUS decision that was itself uplifting, namely, Browder v. Gayle, wherein the court declared segregation on public buses to be unconstitutional. In a document entitled “Integrated Bus Suggestions,” dated Dec.19, 1956, Martin Luther King Jr. and his co-author, W. J. Powell, write, “This [decision] places upon us all a tremendous responsibility of maintaining, in the face of what could be some unpleasantness, a calm and loving dignity…” “If cursed, do not curse back,” they say. And they offer this beautiful piece of advice: “According to your ability and personality, do not be afraid to experiment with new and creative techniques for achieving reconciliation and social change.”

Since I began writing this essay, the Israeli Defense Forces have been steadily bombing civilians in Gaza, and Hamas has been bombing civilians in Tel Aviv. This is an extreme test of my assertion that progressive politics are and should be the politics of compassion. How do we have compassion for Knesset member Ayelet Shaked, who notoriously posted an article on Facebook calling Palestinian boys who fight against Israel “little snakes,” and advocating for the death of their mothers and the destruction of their homes? One answer is that the alternative is to follow her example of dehumanizing her adversary—which name-calling does even without advocating for murder. Having compassion does not mean condoning unjust behavior, and it does not mean giving permission for the injustice to continue or be repeated, and it does not mean not opposing the injustice. It means not regarding the perpetrators as alien life-forms, and not using words that render them as such.

I believe that what I am advocating is important, but I recognize that it’s also difficult. I have uttered hundreds of insults in my life, and have thought many more than that. As with any skill, insulting people becomes easier the more you practice it. The same is true of not insulting people. And the same is true of thinking with compassion about someone whose behavior you strongly object to. A good first step might be not to call anyone an fuckwit on Facebook.