Jon Stewart is not enough: The curse of centrism, and why the Tea Party keeps rolling "Daily Show" Democrats

It's easy to take shots and laugh at the know-nothing right. But our smirks let complicit Democrats off the hook 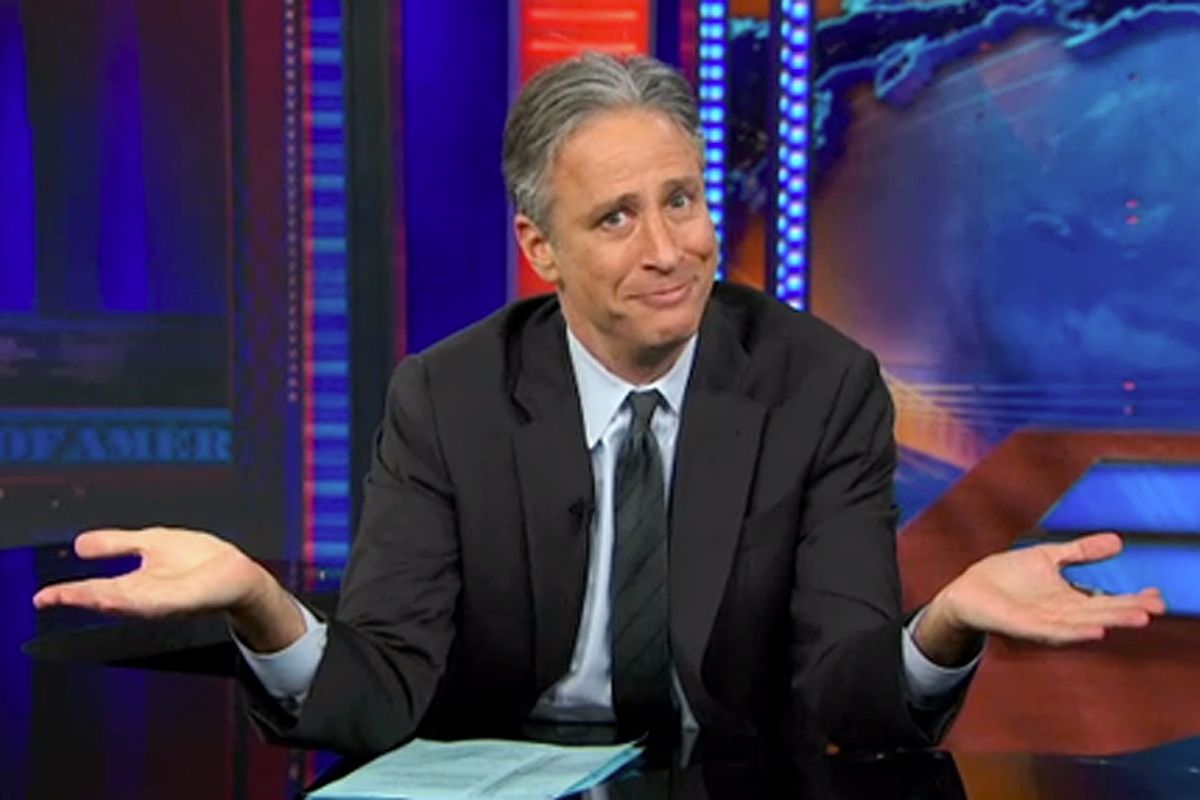 I have spent many years deriding the right, and I have to admit, it has been a hoot. The conservative world is an endless shooting gallery of hypocrites, con men, narcissists, and walking examples of this or that species of cognitive malfunction. In fact, whacking the wingers is such a fun pastime that it is ballooning in popularity these days: The crazy right now furnishes reliable material for our generation’s best comedians, and laughing at the benighted japes of the GOPers is, for many of us, the closest we come to real political involvement.

Today let’s try a little introspection instead. What does it mean when being “on the left” is defined as being a fan of extremely partisan entertainment? What does it do to our larger political vision when we confine our political thinking to the crafting of hilarious put-downs of Tea Partiers and right-wing reality-doubters?

The answer is simple: We miss a substantial chunk of political reality ourselves.

Let me explain what I mean by reminding you of one of the most disturbing news stories to come across the wires in the last month. In a much-reported study, the Russell Sage Foundation discovered that median household wealth in this country fell by 36 percent in the 10-year period ending last year. Wealth for people at the top, as other news stories remind us, has continued to soar. These things are a consequence of the Great Recession, of course, but they are also a reminder of the grand narrative of our time: The lot of average Americans constantly seems to be growing worse. The Great Depression of the 1930s was awful, but it set America on the path toward a period of shared prosperity. Our bout of hard times has had the opposite effect. It has accelerated the unraveling of the middle class itself.

Now, you can blame the risible, Ayn Rand-reading Tea Party types for this if you like, and you can also blame the George W. Bush Administration. They both deserve it. But sooner or later you will also have to acknowledge that there are two parties in this country, not just one; that the Democrats held significant power during the period in question, including (for much of it) the presidency itself; and that even when they are not in the White House, these Democrats nevertheless retain the capacity to persuade and to organize. For a party of the left, dreadful news like this should be rocket fuel. For the Dems, however, it hasn’t been. Why is that? Well, for one thing, because a good number of those Democrats have not really objected to the economic policies that have worked these awful changes over the years. They may believe in the theory of evolution—hell, they may savor the same Jon Stewart jokes that you do —but a lot of them also believe in the conventional economic wisdom of the day. They don’t really care that union power has evaporated and that Wall Street got itself de-supervised and that oligopolies now dominate the economy. But they do care—ever so much!—about deficits and being fiscally responsible.

Bring up this obvious point, however, and you will quickly discover what a dose of chloroform the partisan style can be. There’s a political war on, you will be told; one side is markedly better than the other; and no criticism of the leadership can be tolerated. Instead, let’s get back to laughing along with our favorite politicized comedians, and to smacking that Rick Santorum punching bag.

Do I exaggerate? Not really. I recently happened across a paper published by a prominent Democratic strategy outfit that announced there are no longer any important disagreements among Democrats, repeating a popular journalistic meme of the past few weeks. Virtually every Democrat is a populist now, from Elizabeth Warren to the former Clintonites, the paper argues, and so it’s time for people on the left to halt their “struggle for the soul of the party.” Specifically, they must stop accusing “non-progressive candidates” of “loyalties to groups like Wall Street.” To continue an “unabated struggle against all former adversaries,” apparently meaning Clinton-era centrists, is “quite literally to ‘fight the last war.’ ” Actually, it’s worse than that: to criticize centrist Democrats who have something to do with Wall Street is to contradict categorically the come-together approach that is mandated by our present historical situation:

“The two approaches are inherently and inescapably antithetical. The purpose of placing a clear and broad progressive agenda at the center of one’s political strategy is to create something around which to try and unite a political party. The purpose of a ‘battle for the soul of a party’ is to prioritize purifying the party by defining some groups or sectors as unacceptable.”

I remember hearing some version of this thinking back in the Clinton days, only with the cast-iron logic pointing the other way. Back then we were instructed to stop criticizing centrist Democrats because Americans despised populists. Now we are advised to shut up because populists have won, and criticizing our fellow D’s will only endanger our own triumph.

I suppose I should also report that, in the course of its relentless dialectical reasoning, the author of this strategy proposal singles out me and Adolph Reed as prime offenders. I have been warned, I guess.

When someone tries to shoo me away from a subject, however, my instinct is to sail into it directly. So let me state my own controversial and highly novel theory: I think journalists have a responsibility to hold our leaders accountable when their leading is lousy, regardless of who elected them.

What’s more, I think every critically minded individual has a responsibility to understand not only the ridiculous Republicans' role in the grand disaster of our times but that of the Democrats as well. After all, the unraveling of the American middle class has been going on for decades. No national politician of the last thirty years can claim ignorance about it. The great American turn to the right, which made it all possible, is also a decades-old phenomenon that has been much-discussed over the years. No responsible person can any longer regard the right’s familiar inverted-populist trick as a postmodern mystery or a counterintuitive shocker. We understand now how conservatism has warred against “elites” in order to win over a big chunk of the working class; we have seen how the movement constantly moves the goalposts; we know about its worship of markets and its excursions into racial anxiety.

But somehow, given all this knowledge, the party of professionals and experts can’t figure out how to beat these guys once and for all and turn the economic narrative around. Instead, they gawk and laugh and fuel the right’s well-known persecution complex. And even though conservative economic ideas are the obvious culprits for what has happened to average Americans—even though conservatives have burned their bridges to the fastest-growing segments of the population—the right is still able to mount wave after wave of fake uprisings, successfully persuading a big part of the country that they are the only ones who will really do something to rein in what they like to call “crony capitalism.” For chrissake, the cover of today’s New York Times Magazine presents the market-minded Rand Paul as some kind of heir to the punk rock movement. It is crazy-making to acknowledge that, after all the disasters that these people have rained down on us, they might still control the House of Representatives, but they do—and they have a pretty good shot at winning control of the Senate this fall.

Think about this panorama of political dysfunction for long enough and an unpleasant thought begins to form: That maybe our boon companions in the Democratic Party are just as comfortable and as blind, in their own way, to what is going on in the country as are the GOPers. Maybe they are satisfied to leave well enough alone, to let demographic destiny do the hard work of delivering their majorities, and to avoid straining themselves too much. After all, it is so much easier to laugh.