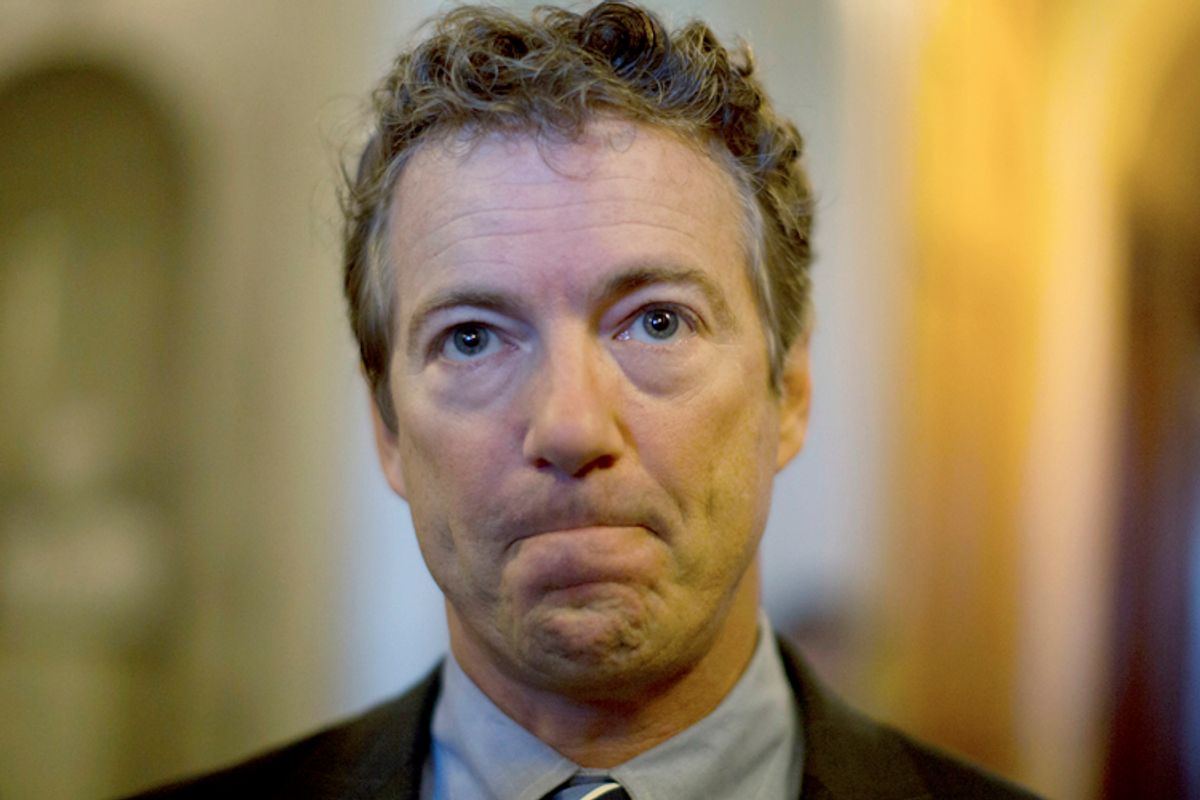 When I was in elementary school, I remember wondering about the day when teaching would become automated, and human teachers would be obsolete. I remember thinking that information could be delivered through computers (as I was seeing with early educational software) and that students could even input responses that could be automatically evaluated. And the technology was very new then, so of course it would only get better (and of course it has gotten much better). What I failed to understand, at that age, was the critical importance of direct human interaction in the process of education.

According to Politico, Rand Paul is “planning a major push on education reform, including education choice, school choice, vouchers, charter schools, you name it.” As one specific example for improving education, Paul suggested that “if you have one person in the country who is, like, the best at explaining calculus, that person maybe should teach every calculus class in the country.” He allowed that “You’d still have local teachers to reinforce and try to explain and help the kids, but you’d have some of these extraordinary teachers teaching millions of people in the classroom.” As an example, Paul lauded the work of Salman Khan, the creator of Khan Academy, a growing vault of education videos aimed to comprehensively cover a wide variety of traditional school courses and other topics as well.

I like Salman Khan’s videos – I think they can be a valuable tool. Just like all sorts of other educational media, talented teachers can utilize these assets wisely to help complement their teaching, and there are many different approaches that can be used to great success. Salman Khan does a very nice job of explaining difficult concepts. This happens to be a great strength of mine as well. And while my knack for explaining the concepts of calculus have been of tremendous value to me in my teaching, I must say that the "explaining" aspect of teaching is one small part of what we do, and that the best teachers (and this goes for just about every discipline, not just higher-level mathematics) do not simply stand in front of the class and feed knowledge into their skulls. This sort of approach to education is one of the flaws in our system, as too often teachers gravitate toward this conventional approach.

Here is the biggest problem with this approach (and thus with Paul’s vision of education): If your brand of teaching is simply explaining things to kids, then you’re not teaching them to think. You’re not teaching them to problem-solve. You’re teaching them to learn what you tell them, and to be able to reproduce something similar. What we need to do in education, however, and in particular in STEM (science, technology, engineering, math) education, is to cultivate creative critical thinking skills. As former Secretary of Education Richard Riley said, “We are currently preparing students for jobs that don't yet exist, using technologies that haven't been invented, in order to solve problems we don't even know are problems yet.” This is always in my mind as I teach my math courses. I have to constantly remind myself to get out of the way of the students, to not jump in with a hint or answer too quickly, and to challenge them to ponder a concept before I explain it to them.

Real learning comes from engaging with material. Whether you’re forming an argument about a character’s motives in a novel, debating the root causes of World War I, trying to make sense of the relationship between temperature and pressure of gases, or trying to understand the Fundamental Theorem of Calculus, the best learning doesn’t happen when the answers are simply given to you. Perhaps even more important, a set of knowledge isn’t the only goal of education, and shouldn’t even be considered the primary goal. Rather, the most important outcome is the development of a set of skills – skills that can only be honed through that direct engagement (not through watching someone else’s demonstration). In STEM courses, the most important thing we teach is problem solving. Yes I want my students to know the basic theorems of calculus and to be able to compute a definite integral. But more important, I know that if I’m educating the next generation of mathematicians, scientists and engineers, I need to prepare them to encounter problems that they haven’t seen before (and, for that matter, that I haven’t seen), and to take on these challenges unfazed. This isn’t effectively done through a set of videos, channeled from one person to 2 million. This is done by highly talented teachers who give their students a taste of something and challenge them to take it a step further on their own and then nudge, assist as needed, and encourage. It’s not a one-size-fits-all approach. It’s an art.

Part of the problem with the perpetuity of education reform is that everyone is looking for the answer to the question, “How do we best teach,” as though there is some formula that is ultimately the best. They see teaching as a science experiment – as though one set of conditions and stimuli will prove to be optimal. That’s not what it is. It is an art. Two great teachers may do things completely differently from each other.  Furthermore, no two classes of students are the same. One great teacher may teach the same thing in very different ways to different groups of kids, depending on their strengths, personalities and the real-time feedback that the teacher reads from her class.  Again, this is something that requires a talented, knowledgeable classroom teacher (the one directing the instruction and activity at each moment) who cultivates a relationship with each student – anathema to Paul’s description of his own vision of education.

So how can we improve the teaching that is done in America? No reasonable person could argue with Paul’s premise that some of our public schools are failing. And while I think most people can think of some great teachers that they have had or know, certainly we have many teachers who just aren’t as good as we would like. Sen. Paul’s comments imply that we actually need fewer qualified educators, that heavy lifting can be done by someone using a video camera and a computer, and that we just need some facilitators, or teaching assistants, in the classroom.  This sounds attractive, like it could save us all kinds of money on education, and drastically improve our results at the same time! It sounds too good to be true, right? Of course it does – because it is too good to be true. Get it out of your head right now that we’re going to improve education by spending less. There is an easy answer to improving education, and it involves spending more.

There are two major external avenues through which a child’s education can be improved: family involvement and teaching. There’s a huge body of evidence showing that family socioeconomic status and education levels have a huge impact on how children achieve in school. Any family can do a great deal to improve their child’s performance through engagement at home (though some families unquestionably have more means to do so than others). There are likely some public policy approaches that we could take as a society toward the goal of encouraging this on a wide scale. An even more obvious public policy approach, though, is to improve teaching. Our education initiatives try all sorts of things to this end, including changing content standards of what is to be taught, encouraging different pedagogy and best practices, encouraging teachers to continue their educations, changing rating systems of teachers, merit pay, etc. I’m not going to argue that these methods are ineffective – there could very well be utility in any of these. None of these, however, gets at the biggest issue: talent. All teachers can work to improve their craft, and can be motivated to work harder. But to have the best teaching, we need to have the best teachers to begin with. This means we need more of our best and brightest to go into the field of education.

So how do we improve the overall pool of applicants for education jobs? This is an elementary economics concept. You pay more for the position. Higher equilibrium salary leads to a better pool of applicants, and ultimately a better labor supply. Simply put, there are a lot of talented people who might consider going into the field of education but choose not to because there isn’t much money in it. We don’t want to continue turning these people away.

This idea is problematic for many people, though. Some people think that because there are some subpar teachers out there, we shouldn’t increase compensation because we’d be rewarding their incompetence (the problem with this reasoning is that a few individuals are used as a reason to impact a system-wide approach – and besides, there are overpaid people who don’t carry their weight in every profession). Others point out the summers off. Many people just don’t think teaching is all that difficult. It seems that because everyone is familiar with education and with teachers (since we all were on the student end of things at one point), many people think they know all about teaching, without having ever stepped in front of a class in that capacity.

But then, many of the people making these arguments (even if only inside their own heads) are huge proponents of a more capitalist economy and the laws of supply and demand. And those laws dictate that, if we want a generally more capable workforce of teachers, we should pay better for that job. Jobs in America don’t pay solely based on how many hours are worked or how hard someone works (and I would argue, by the way, that great teachers do put in that time and sweat); they pay based on value. If we want more value, we have to pay for it.

The ways that we fund our schools in America is a mess. I’m not even going to try to tackle that issue here – I’m simply arguing that our most effective way to improve education is to increase that funding, with the end result of increasing teacher salaries and in the long run, attracting a greater number of highly talented people to the profession. Better-funded schools can also improve education through having better facilities, more programs, lower student-teacher ratios, more planning and collaboration time, better support staff, etc. It’s also important to consider that while increasing funding to schools would cost money in the short run, the doubtless positive effects on education would also pay off on the bottom line down the road in terms of a more productive populace (due to being better educated), lower rates of crime and incarceration, and a stronger all-around economy. This is not purely an expense, it’s an investment.

I’m not suggesting that there can’t be other initiatives that could help our education system (although I must say that I’m not terribly impressed with Paul’s comments regarding his plan thus far, the “you name it” component notwithstanding). There are many different issues in education that are worth discussing with the goal of making things work better. But the single most glaring opportunity at improvement, staring us in the face, is the old saying, “You get what you pay for.”

Jim Goodman is a high school mathematics teacher in Northeast Ohio where he lives with his wife and three daughters. He has a Masters degree in Education, and has experience teaching in both private parochial and public high schools.