Has your news feed become a political battlefield? You aren't alone 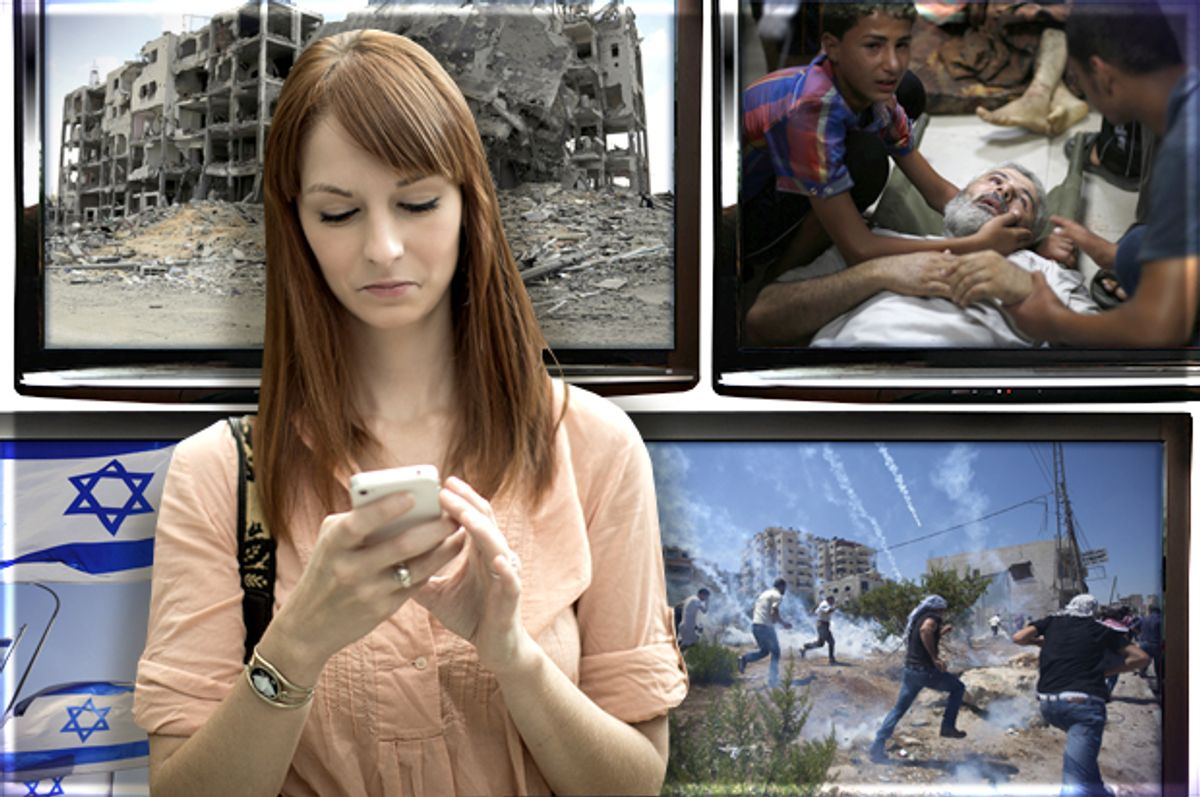 About a month ago, a friend of mine started posting things about Gaza on Facebook. She was terror-struck by the death of children, especially having one of her own. As the fighting increased, her wall became a steady stream of articles and statements about what was happening in Palestine.  She was glued to the Internet and grieving on screen.

I paid attention, and what I began to notice was that over time there were a lot more exclamation points than usual, and many more articles from questionable outlets. What followed was a breaking point – a dubiously sourced article claiming that Israel had built actual concentration camps outside of Gaza.  Not the material you expect a PhD student to promote.  In hysterical bold letters with wild exclamation points, she wrote: “YOU GUYS, STOP ACTING LIKE NAZIS!!!”

I don’t love the Nazi parallel -- or the slinging of World War II references at Israel. I have always been against comparing pain as a means of making a point, especially when it comes to national suffering.  I believe that horrible things speak for themselves as such. But that wasn’t what got me. What got me was when, in the comments section of the Facebook post, she tagged every Jewish friend and organization she knew, myself included – an act I could only discern as antagonistic insofar as it assumed me, and all the other Jewish people she lumped together as a racial entity, as complicit with creation of a “concentration camp.”

This did not feel good, an add-on to already-countless examples of social media gone wrong in recent weeks. What had once been a listing of baby pictures, wedding photos, and postings about gender identity and sexuality has turned quickly and ferociously into a strange and ill-informed polarizing multi-media frenzy. Over the past month I have witnessed -- and I suspect my news feed is not the only one where this is the case -- a wildly varying set of social media responses to the situation in Gaza - some informed, some not, some vitriolic, some muted, some ignorant, some hateful, all mixed together without limit, without referee, without any rules at all.

That same day, a right-wing Jewish woman I met years ago in Washington was posting her ideas on Facebook as well. She was incensed by Hamas’ destruction of “her Israel” and was beginning, in the same vein as my friend, to post articles en masse. Her fervor reached its misguided conclusion when she posted an article about female genital mutilation in the Muslim world and, in all-caps, wrote: “WHAT THE FUCK, YOU GUYS.”

Somehow Hamas and genital mutilation were lumped into one string of words and everything – all sense, all discretion – went to seed.

I am not saying that from these two women I glean truth. But they are two examples among hundreds of others on my Facebook feed leaving me disillusioned and miserable about the state of information and the conception of “truth” today.  I am not just upset for the propaganda and misinformation, nor just for the often ignorant and bigoted comments that find their way to my computer screen. The people on my feed represent a cross-section of the conflict – everywhere from left to right, religious to secular, Jewish to Muslim, Iranian to Lebanese to Israeli and beyond. I am fascinated by the range of voices and dismayed by what appears to be the unifying factor: Distrust, fear and even hate from all sides, and a blatant disregard for dispassionate, even-handed analysis. Facebook is the new stomping ground for learning as you go, venting what you can, and sharing anything, no matter what.

I take issue with many of the Rabbis I know – the ones I once admired or trusted – who now take public stands, posting one-sided news, and speaking on politics as if this, not prayer, is what it means to lead a Jewish people in the time of war. Their aggressive diatribes in defense of Israel, or in defense of the Palestinians never, to me, exhibit a clear defense of life, or a display of genuine higher Jewish values. And I take issue with the supposedly progressive liberals who condemn Jews as Nazis and breed the very hatred they condemn.

I watch boys I grew up with who never cared about a thing in their lives suddenly condemn Israel – as if they can understand what they see on the news after never leaving their parochial corners of the world. I watch friends in Egypt, posting about murdered children and bandying about claims of genocide – while their friends don’t think twice about sweepingly bashing the Jewish community, with no objection. I watch American Jewish acquaintances suddenly opining about international affairs, as if Israel, a country they never before noticed, is something they can call “theirs.” “We cannot, and I will not stand by and watch our Israel die.” As if a country were a puppy.

There are the discussions of moral high ground, some of them reasonable expressions of concern, but always mixed in with the many more ill-informed ones. There are protests in Atlanta by bearded Jewish friends begging for the end to the killing of Gazan civilians and the sad pictures of a friend and her baby alone in Tel Aviv because her husband was drafted, and has since disappeared. But then also expressions of hatred: Breathless accusations about “ZioNazi” fury from leftist anti-Israel protestors – people I met in radical poetry programs.  The only people keeping silent are the people I know actually live in Israel – or in Palestine, in Gaza or East Jerusalem. They aren’t airing their dirty laundry because either their Internet is blocked or they are actually living their lives, most of them too sad about the situation to engage in diatribes.

The unabated flow of information makes it difficult to discern who is making a sincere effort to express their beliefs, and who's looking to score easy points.  How are we to recognize the voices of the clear, the truthful, the educated, the honest? Somehow even my most brilliant acquaintances suddenly lean on misinformation; and the most poised community leader I know is reduced to hysterics and propaganda.  Facebook doesn’t have an editor, there is no censor, and there is no standard. So in a time of war, a war that lays bare the hidden fears and grief and trauma of those connected to it, it becomes impossible to distinguish from among the chaotic mix of truth and fiction, reality and fable.

And all this information is shared quickly, and by the least qualified newsies: Us.  And as quickly as it begins, the flow stops. International affairs are everyone’s business in short bursts - dictated by what the news releases, and then things are back to normal – no more ranting or crying, as if the conflict only exists when we see photos of explosions. A post about their dog, their baby, their upcoming nuptials replaces their fury – it is the convenience of lamentation from the wings of war.

What also concerns me are the fervid exclamations, the exhortations to “read this now, it is really important”; the debates about how “America is involved so we have to keep informed,” as if the distorted information we receive on Facebook is enough to explain the multidimensional nature of conflict and war in the Middle East. And yes, I understand that this all matters, that change is imperative, that silence is deadly.  I believe in free discourse, but worry about what happens when people discourse in such a charged atmosphere. What happens when the uneducated are the educators, storytellers, and bearers of terrible news? Or when the educated lose their intellectual standards? Even the word “peace” feels like a cartoon.

I grew up in Washington, in the thrall of the city’s politics; I know firsthand that real people can make real differences in international affairs. The key, though, is knowing when and how and why and what with. Some of what is written is really about Israel and Gaza and Hamas and Palestine – about grief and horror and disgust and fear -- and a whole lot is about anxieties much closer to home. Our sense of self gets wrapped up in matters of life and death halfway around the world. Rather than engaging honestly in a complex and fluid tragedy, playing out in real time, too many people are trying simply to reinforce their own notions of the world. Facebook is a funnel of grief and mourning, and that grief masquerades as declarative statements and misinformation, and even bigotry and prejudice, all manner of anti-Arab and anti-Jewish rhetoric.

Are we using our voices to change the world for the better, to build a place for constructive discourse? Judging from what I've seen over the past month on social media, and especially on Facebook, I suspect that we aren't.