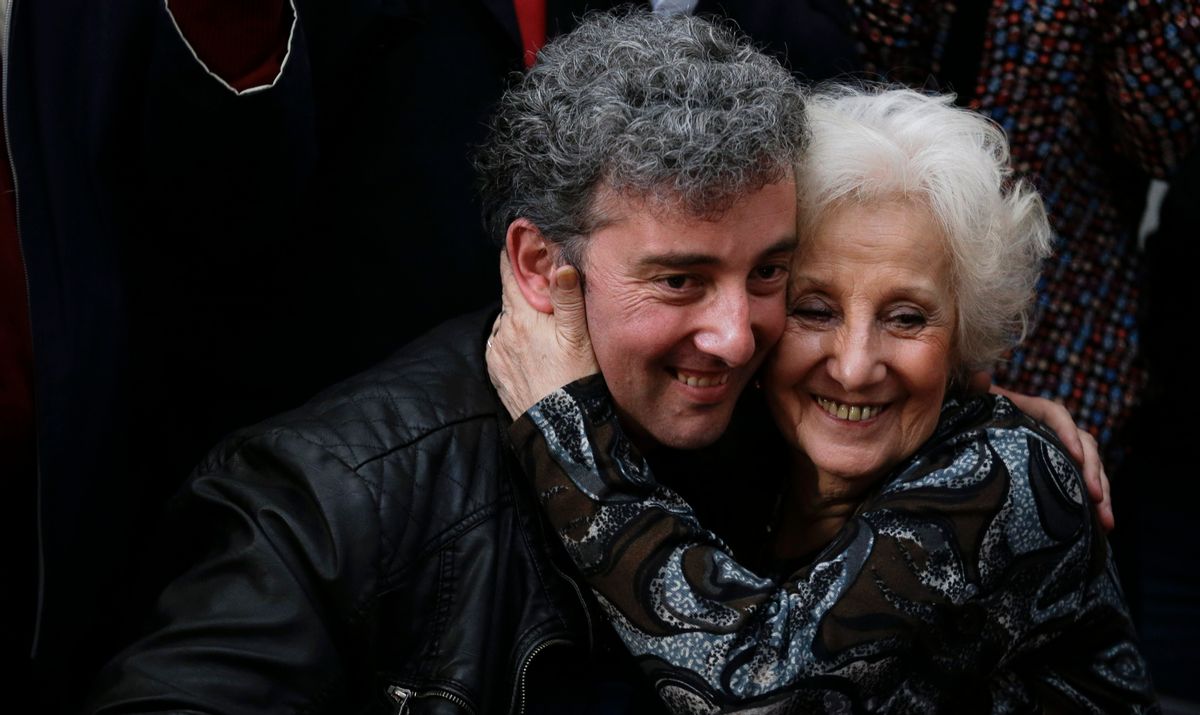 In this Friday, Aug. 8, 2014 photo, Estela de Carlotto, president of Grandmothers of Plaza de Mayo, right, and her grandson Ignacio Hurban embrace as they pose for cameras at a news conference in Buenos Aires, Argentina. Hurban, a music teacher in Argentina, made his first public appearance since he was identified as the long-sought grandson of Carlotto, the country's leading human rights activist. She spent 36 years searching for the child taken from her daughter, who was executed by the military during the country's military dictatorship. Carlotto refers to him as Guido, the name her slain daughter intended to give him. (AP Photo/Natacha Pisarenko) (AP)
--

A provincial music teacher in Argentina emerged in public Friday for the first time since being abruptly thrust into the limelight as a symbol of his country's reckoning with the brutal dictatorship of the 1970s and 1980s.

Ignacio Hurban introduced himself to the public as the long-sought grandson of Estela de Carlotto, a human rights activist who has spent the past 36 years searching for him and other children taken from their parents during the country's "dirty war." DNA results linked him to de Carlotto, whose daughter, Laura, a university activist, was executed in a clandestine military jail in August 1978, two months after she had given birth.

Many in Argentina knew the long-lost grandson as "Guido," the name Laura had intended to give the boy. Asked how he would like to be addressed, Hurban said he would stick with "Ignacio," the name he has used all his life and will continue to use in his career as a musician and teacher.

An annual pilgrimage to a Roman Catholic shrine to the patron saint of work in Argentina drew thousands of people amid uncertain economic times in the country. Saint Cayetano, an Italian priest who died in the 16th century, is revered as the patron saint of wheat, prosperity and labor, and his name day resonates in a country that has undergone economic turmoil in recent years, most recently a default forced by a legal dispute with U.S. investors.

President Juan Manuel Santos took the oath for his second term and promised to redouble his efforts to end Colombia's half-century war amid a renewed wave of rebel violence that has put peace talks at risk. Santos, a 62-year-old economist, narrowly defeated a conservative challenger to win another four-year term by framing their June runoff as a choice between war and peace. "I will employ all of my energies to fulfill this mandate for peace," Santos, wearing a dove pin on his lapel, said in a closely watched 45-minute speech.