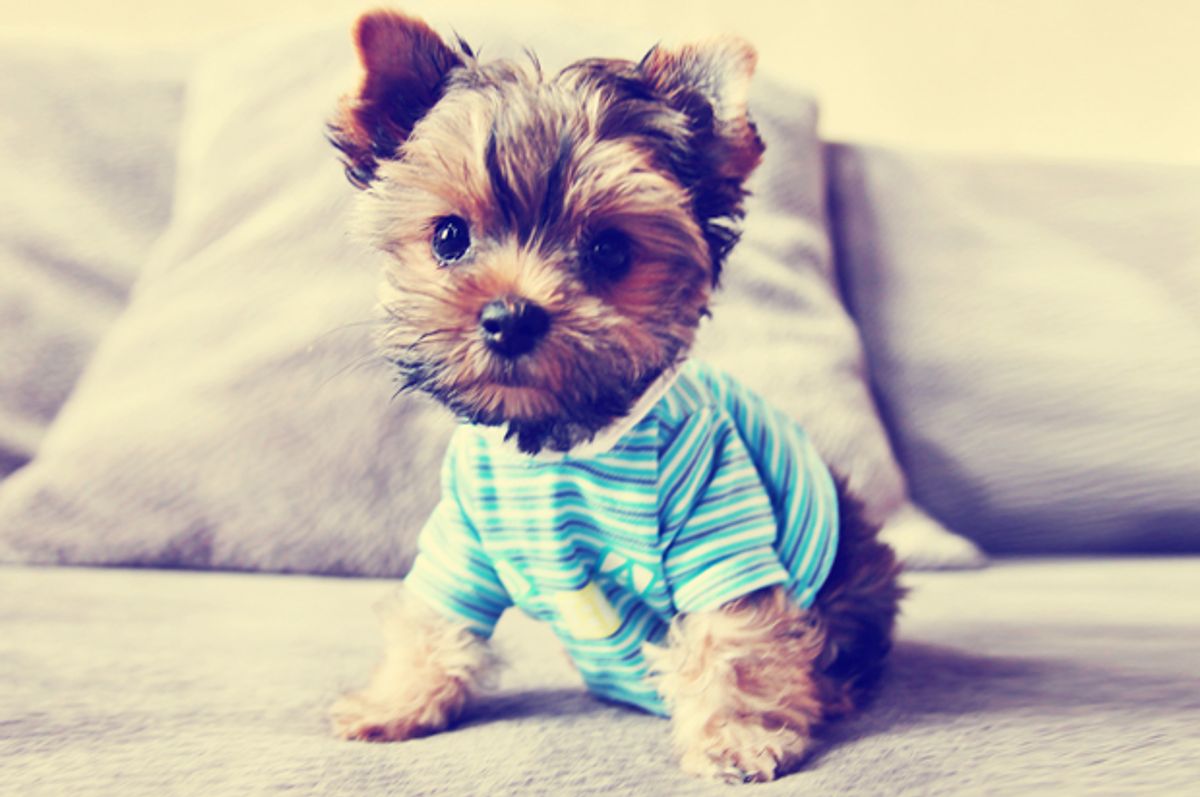 Cupcakes may be dead but the musical geniuses behind Rebecca Black's "Friday" recently brought us their own version of a musical revival with the track "Cupcakes," featuring singer Gina Naomi Baez and Tinkerbelle, a dog. Look past the surprisingly hideous-looking cupcakes, the homeless man, cheerleaders, and you'll see that the real star of this musical production is Tinkerbelle and her extensive wardrobe of frilly, polka-dotted, Technicolor dresses and tutus.

But Tinkerbelle isn’t the first dog (or even the first dog named Tinkerbell) to trot into the cultural spotlight. America has a long history of dressing up tiny dogs in cute clothes — whether the practice is a humanitarian one is an argument better left to the canine parenting blogs. But Tinkerbelle certainly owes a lot to her predecessors.

Before the high-couture outfits dogs would come to sport in the 2000s, we had Ronnie, Rick Springfield's beloved pup featured on the 1981 album cover of "Working Class Dog." Ronnie's outfit appropriately reflects the album title, and he dons a white collared shirt with black, square-end tie: The mid-'90s brought us an even cuter (and educational!) trend in canine style, as seen in the PBS children's series "Wishbone." Played by Soccer the dog, Wishbone reenacted his own interpretations of classic literature tales while wearing some of the most intricate doggy clothes ever seen on television. Passing decades (or, I guess, generations in dog years) brought us smaller and smaller dogs — doggy fashion is now mostly prominent among miniature breeds such as Chihuahuas, Malteses, pugs and Pomeranians. The early aughts not only gave us the captivating duo of Paris Hilton and Nicole Richie but also introduced us to the original Tinkerbell, Paris' teacup Chihuahua.

The current decade has marked a shift in our approach to dog fashion (which makes the current Tinkerbelle's overwrought outfits all the more outdated). Gone are the garish tutus and bedazzled collars—it's all minimalist couture now.

It's no surprise that the actress Blake Lively, curator of the new lifestyle website Preserve (and now hilariously described as a celebrity homemaker by Wikipedia), would have an equally stylish dog. Penny has been spotted in a warm gray cable-knit sweater that I sincerely hope comes in human sizes.

Menswear Dog is not exactly tiny, but he is one of the latest dog fashion icons, and perhaps the one with the flyest threads — the 5-year-old Shiba Inu star of the Tumblr "Menswear Dog," in which he wears outfits lifted straight from the pages of GQ.