When writers have to call out their publishers over nonstop misogynist trolling, it represents a much larger issue 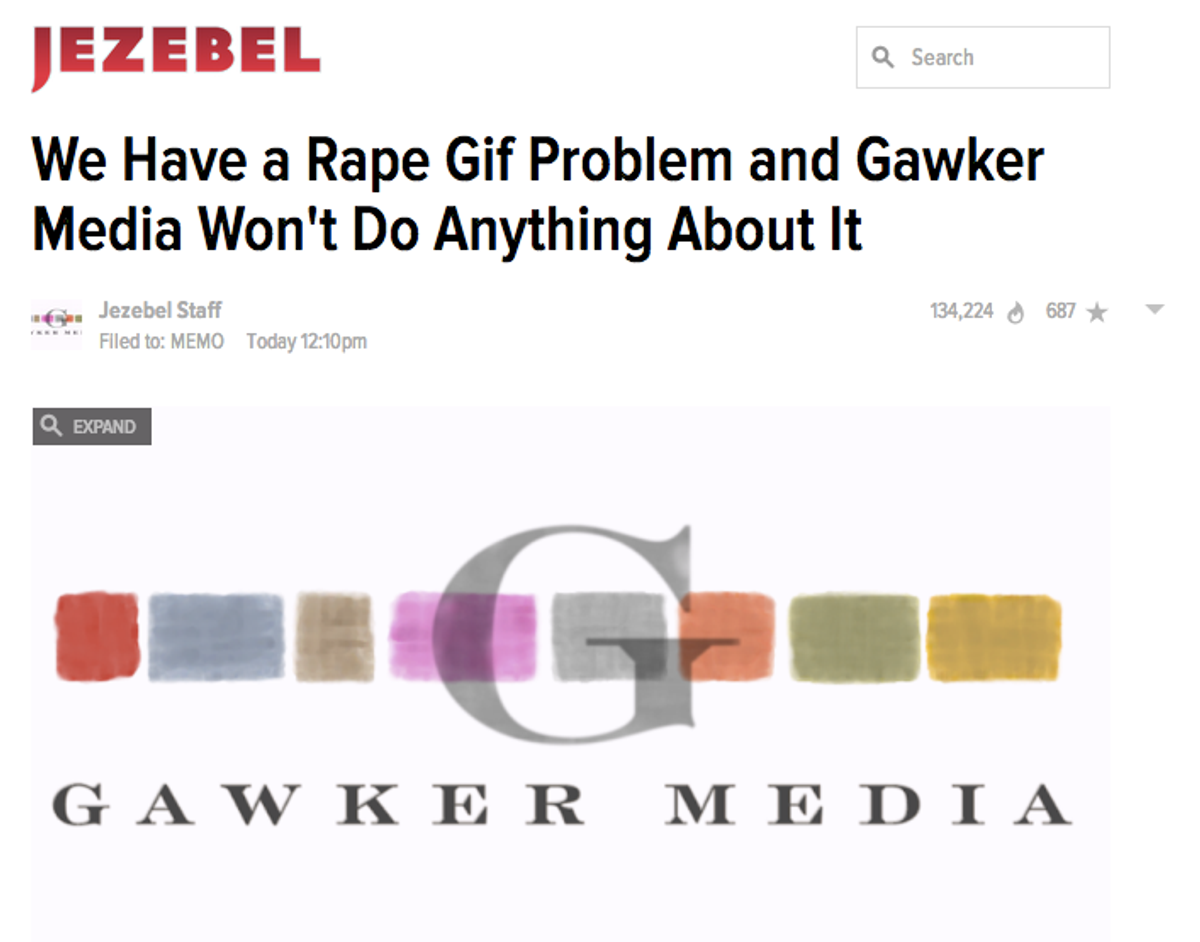 On Monday, the women's site Jezebel took to task a well-known publishing conglomerate for effectively condoning an influx of misogynist images from commenters. It's exactly the kind of important public revelation Jezebel has become known for, but the company being called out comes as something of a surprise: The entire Jezebel staff has authored a public complaint against its own publisher, Gawker Media.

According to the post, titled "We Have a Rape Gif Problem and Gawker Media Won't Do Anything About It," for months Jezebel staffers, readers and commenters have faced a slew of grotesque misogynist images from unknown, untraceable commenters, whose anonymity is protected by gaps in the site's publishing platform, Kinja. The only way to remove the images -- mostly extremely violent pornography and gory rape scenes -- is for the Jezebel team to delete them manually. Engaging with the offensive material has effectively become part of the writers' jobs, but they claim Gawker Media has failed to address the issue:

Higher ups at Gawker are well aware of the problem with this feature of Kinja ... We receive multiple distressed emails from readers every time this happens, and have been forwarding them to the architects of Kinja and to higher ups on Gawker's editorial side for months. Nothing has changed. During the last staff meeting, when the subject was broached, we were told that there were no plans to enable the blocking of IP addresses, no plans to record IP addresses of burner accounts. Moderation tools are supposedly in development, but change is not coming fast enough. This has been going on for months, and it's impacting our ability to do our jobs.

Gawker sites are known for their active comments sections, and for providing anonymity for tipsters in an effort to garner and augment content. But Jezebel claims that in doing so, the publisher is overlooking worker safety:

In refusing to address the problem, Gawker's leadership is prioritizing theoretical anonymous tipsters over a very real and immediate threat to the mental health of Jezebel's staff and readers. If this were happening at another website, if another workplace was essentially requiring its female employees to manage a malevolent human pornbot, we'd report the hell out of it here and cite it as another example of employers failing to take the safety of its female employees seriously. But it's happening to us. It's been happening to us for months. And it feels hypocritical to continue to remain silent about it.

Jezebel has been instrumental in outlining the problem of misogynist Internet trolling more generally. On Saturday, the site critiqued the outrageous attacks on Guardian columnist Jessica Valenti, who incurred the wrath of seemingly all the sexists on Twitter after posting a simple question about tampons. (Valenti later published a piece arguing in favor of free menstruation products, for which she has also received a predictable amount of sexist flak.)

As is obvious from the Jezebel protest piece, one of the key issues with misogynist trolling (in this specific instance and at large) is that most of it happens anonymously. Chris Elliott, the readers editor at the Guardian, noted that Internet anonymity seems to be at the root of sexist commentary, as some of the newspaper's most vitriolic (and off-topic) reader responses appear in the comments sections of posts on feminism or women's issues. While it's likely, as Elliott suggests, that open dialogue with real names attached to (often unbelievable) ideas could help stymie the descent of comments sections into misogynistic cesspools, anonymous trolling is not the only issue -- and it is without a doubt not the only thing that needs to be stopped.

Condoning sexism online perpetuates sexist thinking. Jezebel's public takedown of Gawker highlights why misogyny thrives on the Internet: It's not simply because people become fearless enough to offer their sexist thoughts, but because others are afraid to stop them. Posting rape GIFs on the Internet isn't brave. Calling out and attempting to stop the people who do is.