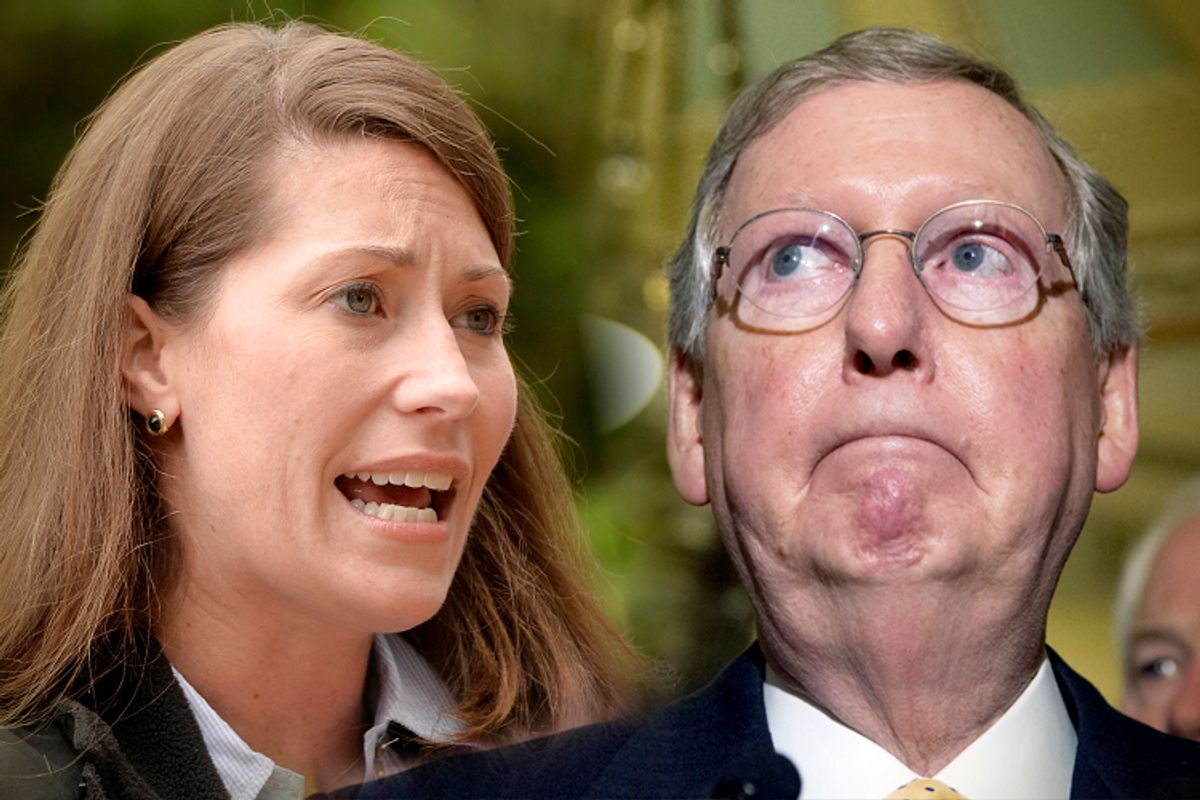 Late last week, Yahoo! News’ Chris Moody reported that Elaine Chao, wife to incumbent Sen. Mitch McConnell, serves on the board of Bloomberg Philanthropies, “which has plunged $50 million into the Sierra Club’s ‘Beyond Coal’ initiative, an advocacy effort with the expressed goal of killing the coal industry.” Taken in isolation, this is good, charitable work that, to be frank, you wouldn’t expect a former member of George W. Bush’s Cabinet and Heritage Foundation fellow to be involved in.

And according to Bloomberg Philanthropies, the anti-coal effort is getting results. “The Beyond Coal campaign has retired 161 coal plants,” a February report from the organization states. “The shift away from coal is also helping to save lives. These retired coal plants will save 4,400 lives, prevent 6,800 heart attacks, and prevent close to 70,000 asthma attacks each year.”

Those are good things! The filthy business of coal mining and burning are causing lots of health problems in Kentucky and other Appalachian states, like higher rates of cancer and birth defects that studies have traced to the release of heavy metals from surface mining. The climate change impact is also significant, as coal-fired plants are the top source of carbon emissions in the United States. Less cancer, fewer heart attacks, decreased risk of climate change-caused catastrophe – great job, Elaine Chao! Wouldn’t have pegged you as one of the good guys.

Of course, that’s not at all how this is playing in Kentucky, where coal is a big part of the state economy and pandering to coal interests is what needs to happen if you want to get elected to statewide office. Thus we have the spectacle of the McConnell campaign vigorously and adamantly denying that its candidate’s wife had any involvement whatsoever in this philanthropic effort to not cover Kentucky with soot and asthma:

"The decisions to make those grants by the Bloomberg philanthropies were made before she joined the board and she played no role in the decision to grant them," McConnell spokesman Don Stewart told Yahoo News. "Sen. McConnell has a longstanding, principled record of defending coal families and jobs. Decisions made by a board before Sec. Chao ever joined do not change that and as the Obama administration will tell you, he hasn’t let up an iota in his defense of Kentucky coal families and jobs."

That’s a bit of a cutesy position to take, given that they’re tacitly acknowledging that Chao joined Bloomberg Philanthropies after their anti-coal activism was established. And local Kentucky media reported that Chao was “on the charity's board when at least half of the grants were made to the Sierra Club.” But this is how coal politics work. You have to reject and denounce the life- and environment-saving charitable work done by the group your wife works for.

(The Louisville Courier-Journal pointed out that Bloomberg Philanthropies also does anti-tobacco activism, which is at cross-purposes with McConnell’s “staunch” defense of Kentucky tobacco interests.)

I certainly don’t want to leave the impression that this is a McConnell-only problem, though. Being a Democrat in Kentucky means you have to play this same game, and McConnell’s opponent, Alison Lundergan Grimes, is positioning herself as a stronger supporter of coal than he is. “Senator, let’s set the record straight. I’m the only pro-coal candidate in this race,” Grimes said last week at an event with members of the United Mine Workers of America. When the Environmental Protection Agency unveiled its new rule capping carbon emissions for existing power plants, Grimes cut radio ads blasting President Obama: “Your EPA is targeting Kentucky coal with pie in the sky regulations that are impossible to achieve.”

Grimes’ pro-coal campaigning led to one of the dumber campaign fights in recent memory. Her campaign put together a newspaper ad touting her support of coal interests that featured a photo of a miner holding a chunk of anthracite. It turned out that picture was actually a stock photo of a European male model pretending to be a miner, and the Grimes campaign replaced it before it went to print. But Politico got hold of the story and … well, you know what comes next. “The stock photograph could undermine Grimes’s messaging as Republicans raise doubts about the authenticity of her pro-coal position,” Politico reported, with complete earnestness.

McConnell’s campaign jumped on this ridiculous issue, with the candidate himself getting in on the action. “My opponent has been in Hollywood so much lately that she really can’t tell the difference between a coal miner and a European male model,” McConnell said at a campaign event. The Grimes campaign fought back. “The stock photo war of 2014 escalated in Kentucky on Thursday night, as Alison Lundergan Grimes’ campaign attacked Sen. Mitch McConnell’s team for using European stock photos in three Facebook posts,” reported Politico (obviously).

This is where pro-coal campaigning takes you, I guess. It would be nice if the debate in Kentucky were on how to best transition the state away from filthy, toxic fuels. But, the politics being what they are, instead they’re fighting over who’s more the enthusiastic supporter of an industry that is destroying the environment and making the people in close proximity to it sick.