The 8 least essential oral histories of all time 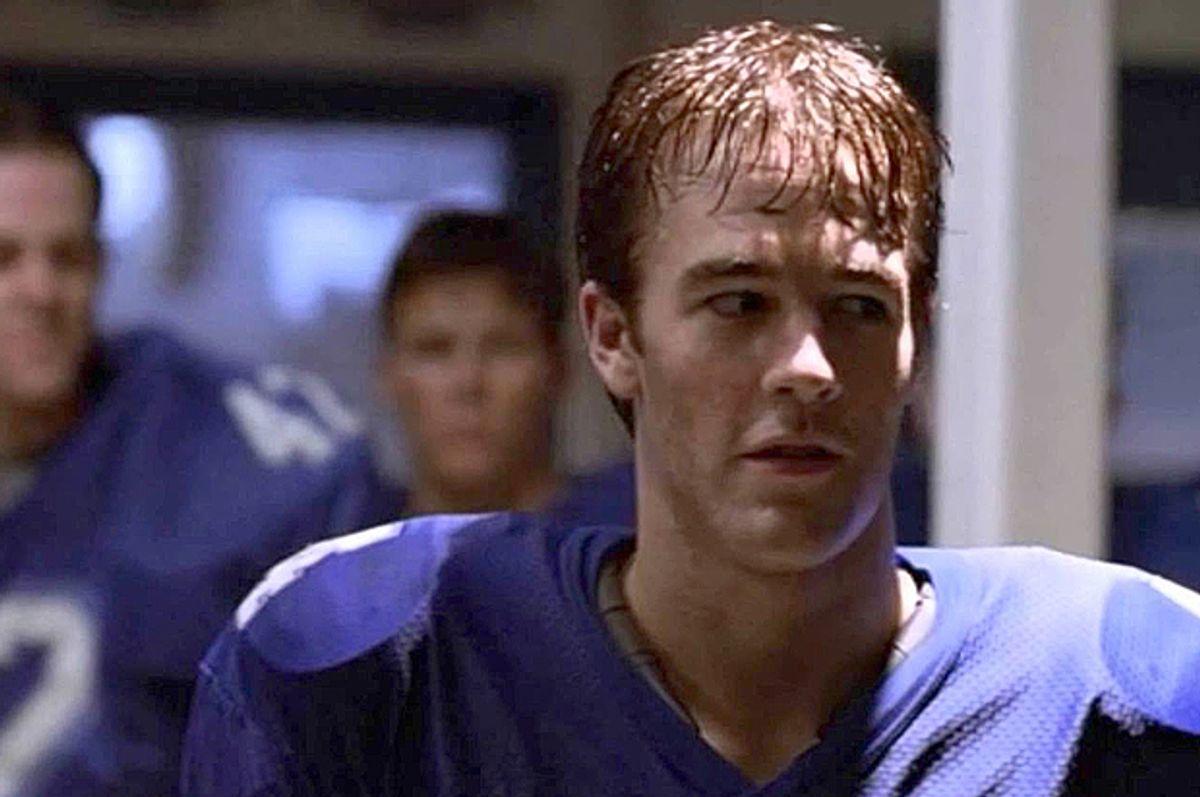 Oral histories can be great reads: They reveal the personalities and politics that produced some of the greatest social movements and cultural creations of our time. There are some, like this one on "Good Will Hunting," that will make you think twice about those screenwriter aspirations you harbor, or this one on "Freaks and Geeks," which will make you want to revisit a show that ended too soon. Then there's this recent oral history of "Varsity Blues," which is ... a lot of words about "Varsity Blues." Over the past several years, thanks perhaps to the proliferation of blogs coupled with a growing nostalgia for the pre-Internet era, the oral history genre has exploded. But, as with everything that becomes an Internet trend, now we're on Oral History Overload, giving oral histories of things that happened five minutes ago, or fads of dubious origins that disappeared as quickly as they came. So here are eight of the least essential oral histories of all time:

"The History of the Typewriter Recited by Michael Winslow," Ignacio Uriarte via Gizmodo, 2010

The full 115 year-history of the typewriter, as told in sound effects by "Police Academy's" Michael Winslow:

Back in 2011, when we had reached oral history fatigue (now we're in the hangover phase), the Observer got meta with the genre and issued the most unnecessary oral history ever:

MICHAELANGELO MATOS: I pitched The Daily a feature on the oral history boom of the last few years. I had a cultural idea: it’s happening at the same time that blogs are making first-person writing so popular and accessible. After I sent my pitch, I thought, “I should have just pitched an oral history of the oral history. Somebody’s going to do it eventually—people are going to run out of ideas.” I had that thought for maybe ten seconds, and then I went back to what I was doing.

CLAIRE HOWORTH, ARTS AND LIFE EDITOR, THE DAILY: Chris Wilson, one of the news editors, saw the pitch and wrote back, “How about an oral history of oral histories?” And from there, it was pretty obvious that was what should happen.

MATOS: Once Claire gave the go-ahead, I thought it wasn’t going to happen right away, because I had five other giant assignments to do. But she said, “How fast can you make it happen?” I said two weeks, and I actually did it in about two and a half. The great thing was I managed to negotiate my fee up.

"An Oral History of YOLO, the Word That Lived Too Long," Vanity Fair, 2013

It turns out that an oral history of the usage of "YOLO," the hideous acronym popularized by Drake, is far more interesting than the phrase itself ... but is that really saying much?:

Katherine Martin, Head of U.S. Dictionaries at Oxford University Press: The phrase “you only live once” goes back to the 19th century, and maybe it’s just so irresistible that it forms a pronounceable acronym. It looks as though the original phrase sort of came into its own—there’s a pretty steady increase of use from 1940 to 2000. In our research on the history of YOLO, we’ve uncovered it as early as 1996. Of all people, Mickey Hart, the drummer of the Grateful Dead, has a ranch called YOLO, for “you only live once,” in Sonoma, California, of all places.

Mickey Hart, drummer of the Grateful Dead: My wife found this place in a brochure of homes in Sonoma County, but it was an out-of-date brochure. The person who was selling it took it off the market—he wanted too much for it. [But] we just loved the place. It was too much for us, a lot of money at that time, 22 years ago. And we just looked at each other. We wouldn’t leave until we made the deal with the owner. We told him, “Just go take your clothes and take the paintings . . . We’ll pay you list price, you know, here’s cash and go.” [Laughs.] “I’m going on tour. When I get off of tour, July 5th, I want to live here.” And so we just looked at each other and we said, “Hey, you only live once!”

We shortened the name because we didn’t want to talk about it with people. The Grateful Dead ranch used to be called Mickey’s Ranch, or the Grateful Dead Ranch, or something like that. I didn’t want any of that. So we immediately named it YOLO. It’s a very special place and a four-letter word that really describes the attitude and everything pretty much behind it. Our whole mindset at the time, and the idea that to enjoy yourself while you’re here, at least you know you’re here. All the records I make, all the music and the projects, they all come out of YOLO. It was really a masterful stroke, just kind of sucking it up, taking a deep breath, and saying, “You only live once. Let’s go for it, baby.”

"Remembering 'No Scrubs': 'Guys Were Adamant About Not Being a Scrub,'" Esquire, 2013

When done properly, the oral history is a retrospective that honors a cultural icon on a special anniversary -- 10, 15, 25 or 30 years later -- reuniting the people behind the movement or art piece for a candid conversation about what they unwittingly set in motion all those years ago. This so-called oral history in Esquire is really just a monologue by TLC's Chilli about "No Scrubs," 14 years later, meant to promote the TLC biopic:

Lisa was trying to juggle her own thing with our stuff and Tionne was like, "This is not the time." So we had that kind of stuff on the road. Drama. She wanted to do a solo project, and we totally supported her. It's just that her timing was a little off because we had a job to finish.

Being on the road is sort of not fun. The best part for me is being on stage. You don't get to see the different cities and states that you visit unless you have, like, two days there. That tour bus — that's your crib. You have, like, 1,000 different movies, you're eating well and sleeping 'til you get to the next spot. Then it's back into the routine. My son [Tron Austin] was always with me. I would bring him to the studio sometimes when I didn't have the crazy hours. After that, we were on the road. He was packed up and hanging with mommy.

Unfortunately, executives of Oral-B have not delighted us with a true oral history of dental floss. However, this article on OralB.com is technically still an "Oral" history:

Over the years, anthropologists have found evidence that ancient people used various implements such as pointed sticks for interdental cleaning.

But according to most sources, credit for the invention of dental floss as we know it goes to a New Orleans dentist, who in 1815 began advising his patients to use a thin silk thread to clean between their teeth.

"The Definitive Oral History of the Wikipedia Photo for 'Grinding,'" BuzzFeed, 2014

BuzzFeed's Katie Notopoulos is your go-to source for the most hilarious, frivolous oral histories on the Web. Here, she and other editors examine the absurd photo used for Wikipedia's entry for grinding:

“Guerillero”, Wikipedia editor: At the time, the page on grinding was on my to-fix list because the article was, and still is, really bad. Since there isn’t much textual informational about the dance in the article, I went to Flickr. The photo in question was the least awkward photo that popped up. I think  I was searching for grinding and dance and narrowed it down to Creative Commons photos only. I figured that some sort of a photo was better than none, so I uploaded it. After that, I sorta lost interest with the topic and moved onto other things. I don’t think I made a single edit to the text of the article.

Dave Stopera: I always remembered it after I saw it, and when I got around to making the post I had to put it in. It is just so, so awkward and terrible. The man is eating a cigarette. Everyone looks slightly wet. He’s wearing a hat he won at Six Flags earlier that day. New Balance shoes shining like a beacon of hope. It really is the whole package.

An oral history based on Reddit comments -- a true sign of the Internet age. To understand how the Internet community views Gawker Media, look no further than this post:

I feel like the Gawker Media group is worse than the Daily Mail and Fox News put together. Lifehacker and Jalopnik are the only ones that can be saved from that group. Gawker, Jezebel, Gizmodo, Kotaku, io9 and Deadspin are second-hand garbage. Who in their right mind can even conjure the idea of a Gawker acquisition? Am I alone in this?

Denton founded Gawker and owns it but the editor-in-chief is Remy Stern.

It's too bad jalopnik had to be thrown into this mess. I still remember before they were part of the gawker network. I like that site.

Gawker is just a Reddit feed reader with a Hipster-Docuhe filter turned on.

The Gawker.com is ridiculously not credible.

"The Complete Oral History of the Time We Ordered a Pizza Using the Push for Pizza App," BuzzFeed, 2014

Once again, BuzzFeed's Katie Notopoulos stretches the genre of oral history. If you've ever ordered a pizza, eaten a pizza, or used a smartphone, this oral history will hit close to home:

Katie Notopoulos, pizza orderer: I saw an article about this new pizza app on The Verge. At the time, we were very hungry in the office. It was right around lunch. Maybe 12:20 p.m. I wanted to order salads from Just Salad. Charlie and I always get the Thai Chicken Crunch salad. I’m not sure what Myles gets. It was Johana’s first day so it was about to be a really important moment when we discovered what her salad preferences are. But then I was like, “What if we got pizza?”

Myles Tanzer, pizza eater: When I heard Katie say “pizza,” I was relieved because I’m not even sure what salad I was going to order. It was a little bit of whimsy on an otherwise humdrum day. Pizza! On a Tuesday!

Katie: I downloaded and signed up for the app. I was ready for pizza.

For an oral history of this post, feel free to reach out to the author via email. (Note: She cannot guarantee her response will be relevant to your questions.)