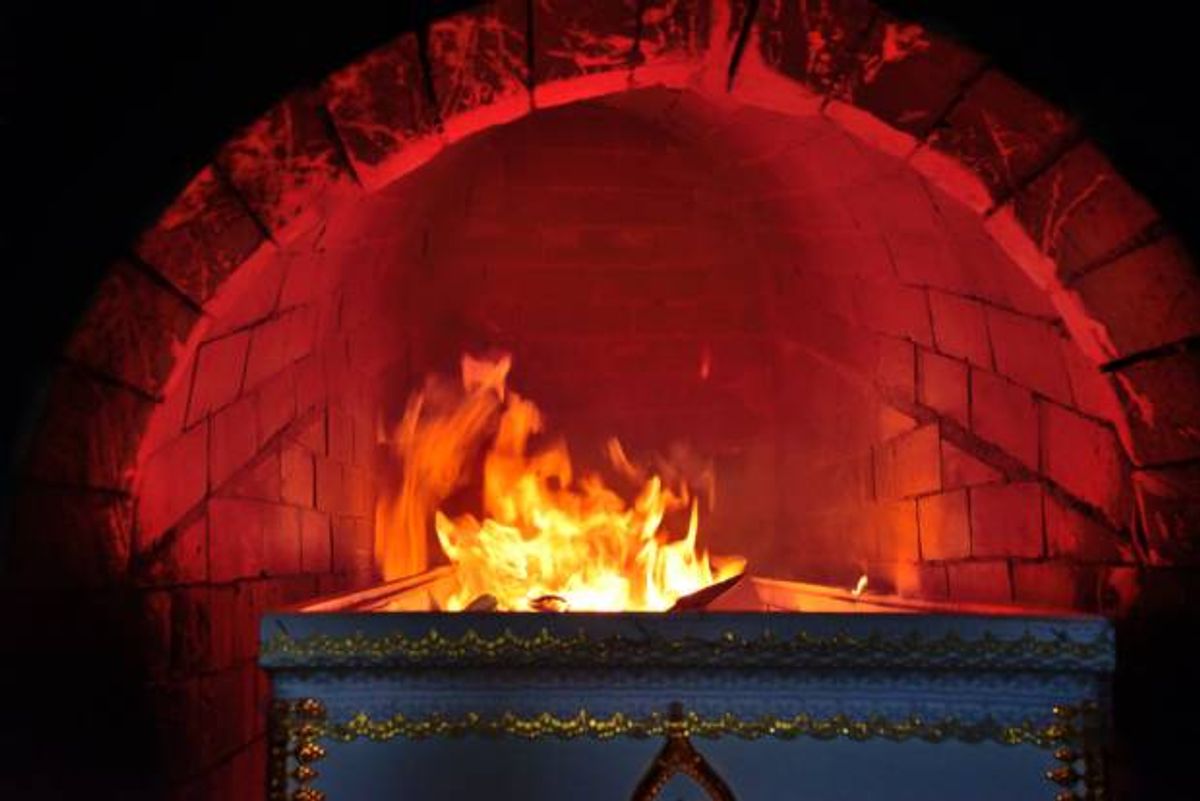 We all have dark streaks, right? The thriller/horror genre is my absolute favorite in books and movies; ghost stories have existed for all of human history (probably); crime reporters make their living knowing that people will gobble their stories up -- the more graphic the better. We do these things because we are scared and we are curious. Overloading ourselves with the worst kinds of death (which will never ever happen to us) is cathartic in the most basic way.

Now, two men in China have created the ultimate indulgence for people curious about death: "Samadhi -- 4D Experience of Death" is a death simulator -- WAIT SORRY WHAT I AM NO LONGER ON BOARD WITH THIS.

This horrifying "escape room" is being pitched as a "game" that will use special effects to bring players as realistic a death experience as can be achieved while still, ahem, living. If a participant loses, he will have to lie on a conveyor belt which will transport the player through a fake funeral home incinerator. To create an authentic experience, the game will feature hot air and light projections to make sure you never sleep again. The player is then transferred to a soft womb-like chamber to signify his or her rebirth.

The winner will also die because "everyone will die eventually, no matter what they've survived." So, forgive me if I'm being thick, but what is the game exactly?

The pair visited a real crematorium and asked to be sent through the furnace with the flames turned off.

"Ding went in the crematory first and it was stressful for me to observe from the outside," says Huang.

"The controller of the crematory was also very nervous; he usually just focuses on sending bodies in, but not on bringing them back out."

When it came to Huang's turn, he found it unbearable.

"It was getting really hot. I couldn't breathe and I thought my life was over," he said.

The two came up with the idea for the game while working at a hospice. "The saddest part of the job wasn't seeing the patients passing away, but how the families refused to face death -- the final days with their loved ones consisted of kind but shallow lies," said Ding. "We lack understanding of death and the fear can become so overwhelming." They decided to create an experience that will force participants to confront their own deaths and reexamine the way they live their lives.

They launched a campaign on jue.so (the Chinese version of Kickstarter) to raise money. The response was overwhelming, with the project receiving the equivalent of over $67,000 in just three months. The attraction will open in September of this year and will cost $40 for the experience, which is totally in Chinese.

Okay, fine. It's a nice idea. But I refuse to participate.