For millennials, Robin Williams was our childhood

From "Mrs. Doubtfire" to "Jumanji" to "Flubber," in '90s movies the Oscar-winner was a kid in a grown-up's body 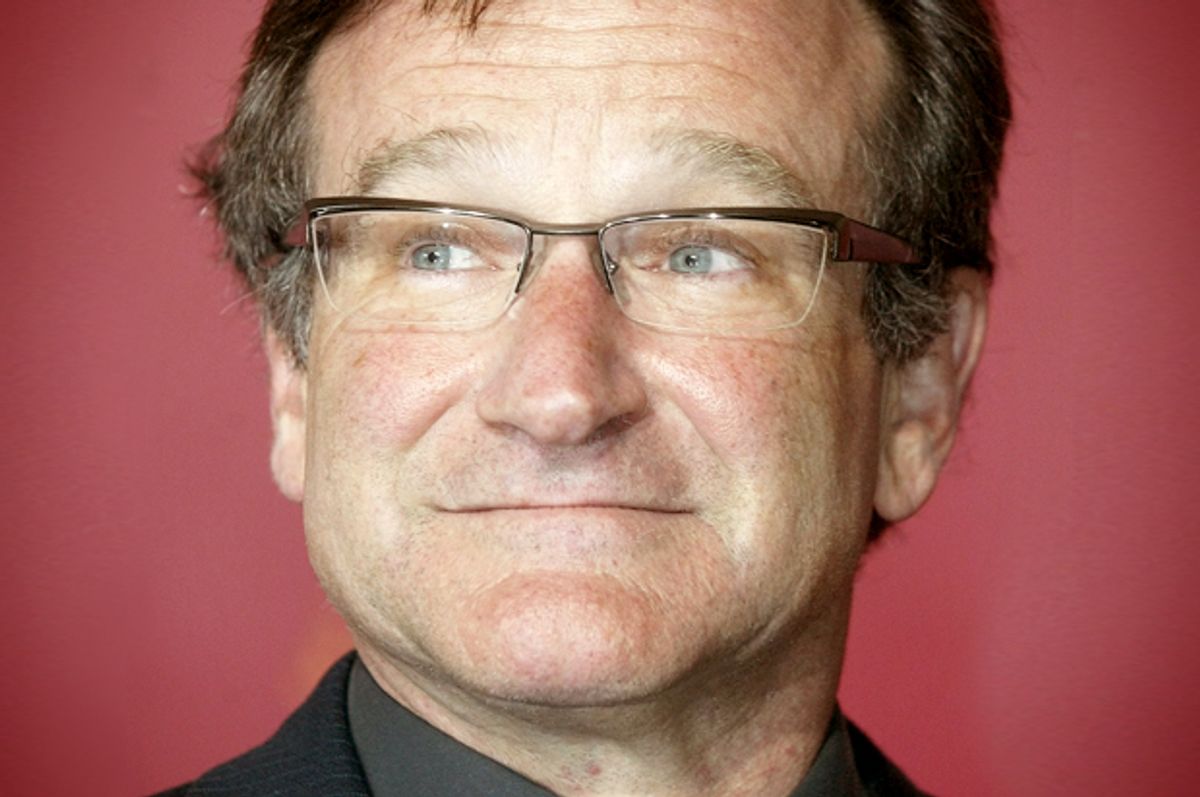 Robin Williams, who died unexpectedly today at 63, was hugely admired among his own generation -- the genuine affection in the room, say, when he won his "Good Will Hunting" Oscar speaks to just how well-liked he was in Hollywood. And yet unlike many of his contemporaries, Williams had a particular impact on the slice of the population now in our mid-to-late 20s and early 30s. Through the 1990s, Williams, an established film star, shifted into a new gear in his career; he generously and humbly took on entertainment for kids. Williams will be remembered for his edgy comedy and for dramatic turns, but for people my age, Williams was our childhood.

Williams' filmography in the 1980s and early 1990s is full of prestige projects ("Good Morning, Vietnam," "Awakenings," "Dead Poets Society"), but something shifted with "Hook"; the movie about Peter Pan rediscovering the joy of Neverland had the same effect, perhaps, on Williams, who'd always been wacky and loose on-screen but was suddenly acting like he'd never grown up. It took a fairly humble A-lister to play a supporting role in an animated film at a time when voice acting was an anonymous profession, and a fairly brave comic known for working blue to abandon anything that wasn't safe for young children. And yet Williams' performance as the Genie in "Aladdin" was straightforwardly a triumph, lending one of Disney's grimmer stories its imaginative expansiveness. Without Williams, it's impossible to imagine "Aladdin" becoming the VHS classic it was through the 1990s; people in my age bracket, even those who may not be able to quote chapter and verse, can easily call to mind the sense of fun and comfort Williams' voice conjured. He was generous enough to erase his recognizable face and body entirely, and yet as a blue drawing was more vivid and lifelike than the vast majority of TV characters.

Again and again, Williams went to extremes in his desire to please. In "Mrs. Doubtfire," simply one of the best family films ever made, the actor buried his face under makeup and his body in a fat suit in order to pull off physical comedy that felt, for kids, somehow illicit. We weren't supposed to be seeing something so strangely charged, even if the moral (about parental love) was brought home safely.

Certain themes emerged. In "Mrs. Doubtfire," Williams plays a voice actor who's too childlike to sustain his marriage to Sally Field; in "Jumanji," Williams played a man who'd been trapped inside a board game since childhood and who'd never lived in the real world; in "Jack," he played a boy trapped in the body of a man; in "Flubber," he was a professor unable to deal with the very real pressures of running a lab and bedeviled by magical, fun green goo. It hardly needed to be made this explicit to the children in the multiplex seats or, more likely, watching on Blockbuster rental that Williams was like us. He was strangely innocent of adult-world concerns and, better yet, he was utterly unselfish about lowering himself to the level of kids. What he found funny was funny to his audience, who cared not at all about his Oscar nominations or public profile or past comedy career.

As the century turned, Williams got interested, again, in serious projects, but it didn't help that the mid-budget adult drama was beginning its disappearance. He'd been out of leading-man roles in adult movies for so long that something was off his fastball -- movies like "Jakob the Liar" and "Bicentennial Man" had conceits (a man tries to spread hope among his friends with fanciful lies during the Holocaust; a robot can live forever but just wants to be human) that were two degrees removed from the sunny, high-concept optimism of kids' movies. (He'd lately, fittingly enough, rebooted his children's movie career as Theodore Roosevelt in the "Night at the Museum" movies.)

It hardly mattered, though, to the now-early-teens who'd been raised on Williams' movies. For them -- for me -- Williams has a place in the pantheon simply by virtue of being that rare star who seemed excited to work on projects we cared about. Giving joy is as important as evoking tears or provoking thought, and Williams' legacy, perhaps, can be measured in the imprints his movies left in rec-room carpets, as kids parked in front of the TV rewound his movies again and again.