"It's totally legal ... we have a very sophisticated little spread sheet where everybody gets tracked" 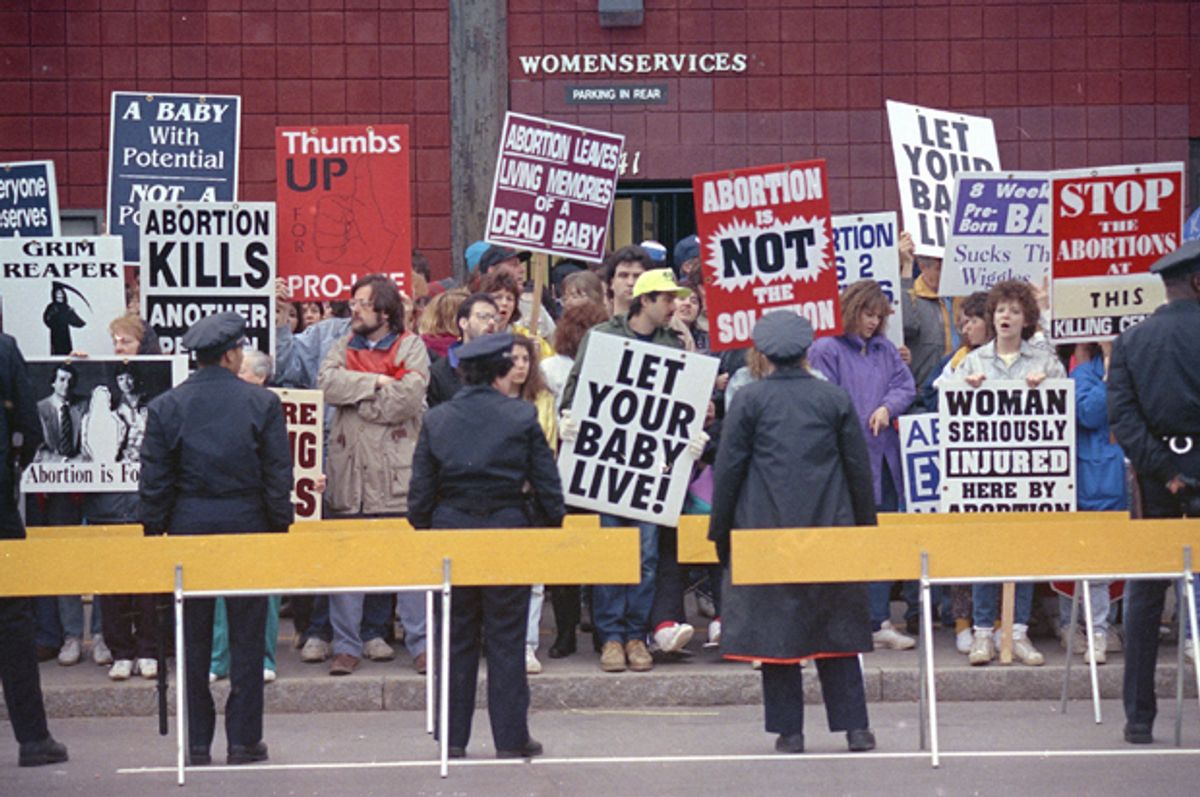 One of the most frustrating things about the main opinion in McCullen v. Coakley, the Supreme Court decision striking down Massachusetts' buffer zone law, was Chief Justice John Roberts' contention that the people stationed outside clinics are "not protesters." According to Roberts, these "sidewalk counselors [...] seek only to inform women of various alternatives and to provide help in pursing them.  [They] believe that they can accomplish this objective only through personal, caring, consensual conversations."

Anyone who has entered or even walked by a clinic anywhere in this country knows this isn't the case. There's intimidation, as much close contact as protesters think they can get away with, and shouts of, "Don't murder your baby!" Esther Priegue, the director of social services at Choices Women's Medical Center in Jamaica, Queens, recently told the New York Times that despite a city law that makes it a crime to block entrance to a clinic or harass patients, “It doesn’t feel like we have any law to protect patients. They’ll come in crying and shaky. They’re afraid to even leave the facility.”

There's already ample documentation of what this kind of "counseling" entails, but a new bit of audio of Texas antiabortion groups really drives the point home.

Earlier this month, at an anti-choice organizer training in Texas, speakers from four antiabortion groups detailed how they instruct protesters outside clinics to identify and monitor patients, doctors and clinic staff. They track license plates and keep tabs on the people who enter and exit the clinics. They also boasted about how the presence of protesters intimidates patients from entering the clinic, since their numbers can sometimes overwhelm. "They don't want to drive in because they see our presence there," explained Karen Garnett of the Catholic Pro-Life Committee of North Texas. Another speaker explained how her organization had mined district records to find the location where a provider in Texas -- seeking to comply with the pending requirement that clinics become ambulatory surgical centers -- might be opening a clinic. "We are on top of it, we know where he will be moving," said Abby Johnson of Live Action.

NARAL Pro-Choice Texas executive director Heather Busby noted in a statement on the video -- released by her organization and Progress Texas -- that the problem of intimidation will likely get worse as protesters concentrate their efforts on the dwindling number of clinics. Since the state's omnibus antiabortion bill went into partial effect, the number of abortion providers dropped from 41 to 19. If providers lose a pending court case challenging the ambulatory surgical center requirement, that number could drop to six or seven. According to recent data, in the wake of HB 2, the number of women of reproductive age living more than 200 miles from a provider has increased by nearly 3,000 percent, from 10,000 women in 2013 to 290,000 in 2014. That number threatens to balloon to more than 800,000 come September.

“The same groups that lobbied Texas lawmakers to pass HB2, a law that has nothing to do with the health and safety of women, are those outside abortion clinics, harassing and intimidating patients, blocking them from accessing the care they need, and threatening abortion providers," Busby said. "With fewer clinics for these stalking protesters to target, the dangerous impact of their intimidation tactics will be exacerbated. Texas women are now not only forced to travel hundreds of miles to even access a safe and legal Texas clinic, but once they reach a clinic they must also confront the very real threat posed by these antiabortion activists. The antiabortion harassment tactics outlined in this disturbing training lead women to seek dangerous alternatives.”

And while Texans fight hard to protect abortion access and all forms of reproductive healthcare, the antiabortion groups behind HB 2 said they are in it for the long haul.

"We want to keep pressure high, letting them know that they can move wherever they want," Johnson said during the training. "We're still going to be there outside their clinics."