James O'Keefe's new idiocy: I put on a dumb costume and didn't get arrested!

The gotcha-filmmaker is very concerned about border security. He should call for comprehensive immigration reform! 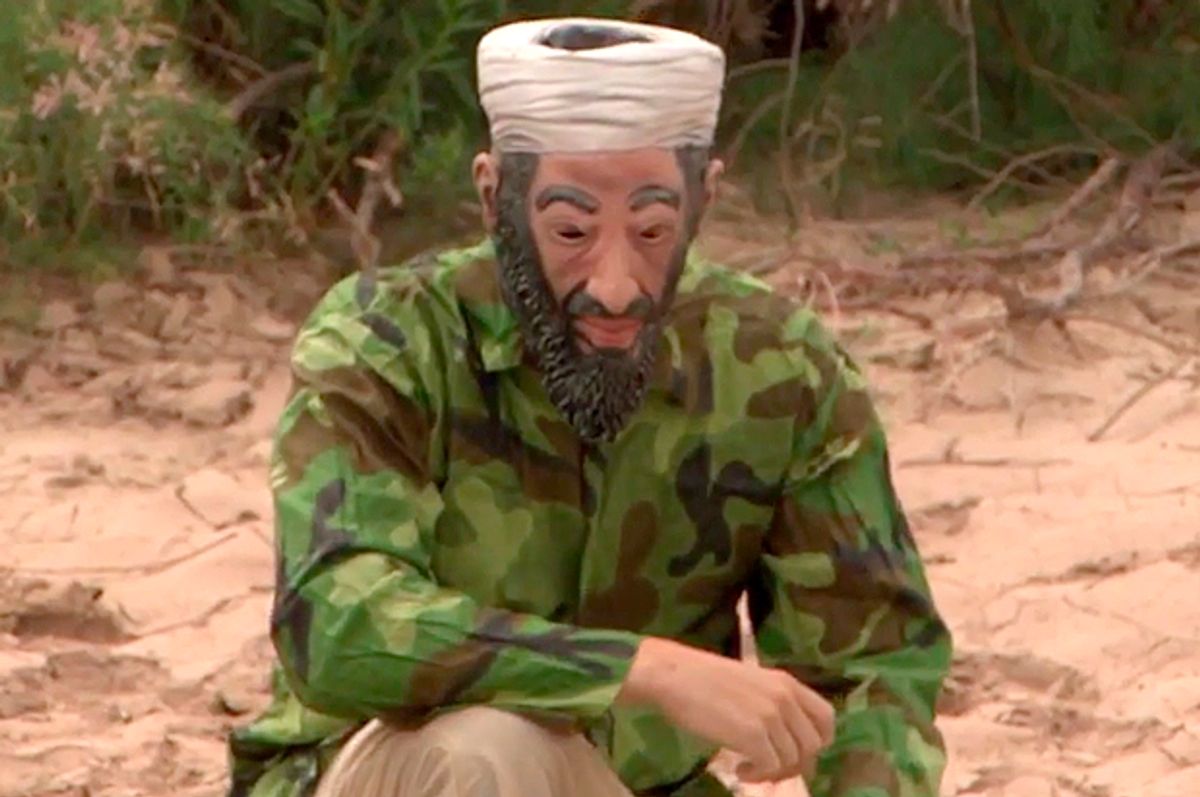 How is right-wing video prankster James O'Keefe doing these days? Oh, pretty well, y'know, just dressin' up like Osama bin Laden and fordin' a stream to sneak into the United States.

Do you get it? Do you get it? Harry Reid doesn't get it. The U.S.-Mexico border is so poorly guarded that a right-wing provocateur dressed in a Halloween costume can film a video of him walking through a stream all the terrorists are just walking into the country from Mexico, all the time, and the fat cats in Washington don't even care. What are they doing about it? Nothing. Good heavens.

Still, the ill-eagles are just pouring across the border here, O'Keefe says, in the same video in which he constantly points out that there's no other human around for miles. What they do is simply cross that little stream, just like Osama bin Laden did, and then walk a few more miles to Interstate 10, where their domestic terrorist buddies like Barack Obama pull over their vans and pick up them up and drive them to their first day of work in the mailroom of Secret Jihadi Beachhead Inc. on Park Avenue.

O'Keefe interviews Sheriff Arvin West of Hudspeth County, Texas, about the lack of security on this stretch of the border. (As Gawker's Adam Weinstein writes, West has a history of unsavory behavior.) O'Keefe and West talk about the incomplete fencing and the lack of agents on the border. "You hear the rumors of boots on the ground and more agents," West says. "We've got plenty of agents, they just need to be on the border. Look around you ... you look miles and miles in either direction and there is not a Border Patrol agent."

Concerned about border security resources? Fine. What if we told O'Keefe and West that there was a bill out there that would:

• Authorize an additional 700 miles of fencing

Would a bill with this almost farcical level of border security enhancement allay some of O'Keefe and West's concerns? Because it's all right there in the comprehensive immigration reform bill that passed the Senate with bipartisan support last summer and was then killed in the House of Representatives.

Those requirements listed above are the ones that would have to be met before those already here illegally would be considered for green card or permanent citizenship status. Conservatives say that if immigration reform is going to be done, securing the border must come first. And so the bill passed last year made the path to citizenship conditional to verified border security. House Republicans, before they completely nixed the idea of voting on any immigration reform bills this year, had floated a "step-by-step" process for reform -- first, a bill for border security would be passed, and once the border was deemed secure, Congress would come back and consider what to do about those already here illegally. This approach is obviously laughable, as anyone who's been alive for five seconds would realize that Republicans would never come back to consider a path to citizenship after border security was already procured. Another way of putting it is that Republicans asked Democrats to abandon their leverage and Democrats said no. Curses!

"Comprehensive" is a scary word to some, but all it means is a negotiated package that allows each side to achieve its primary goals on a topic area through negotiation. If O'Keefe is worried about The Terrorists slipping through a porous border, he should urge House Republicans to consider a negotiated package that marries a path to citizenship or legal status for certain undocumented immigrants with an effective militarization of the southwestern border.