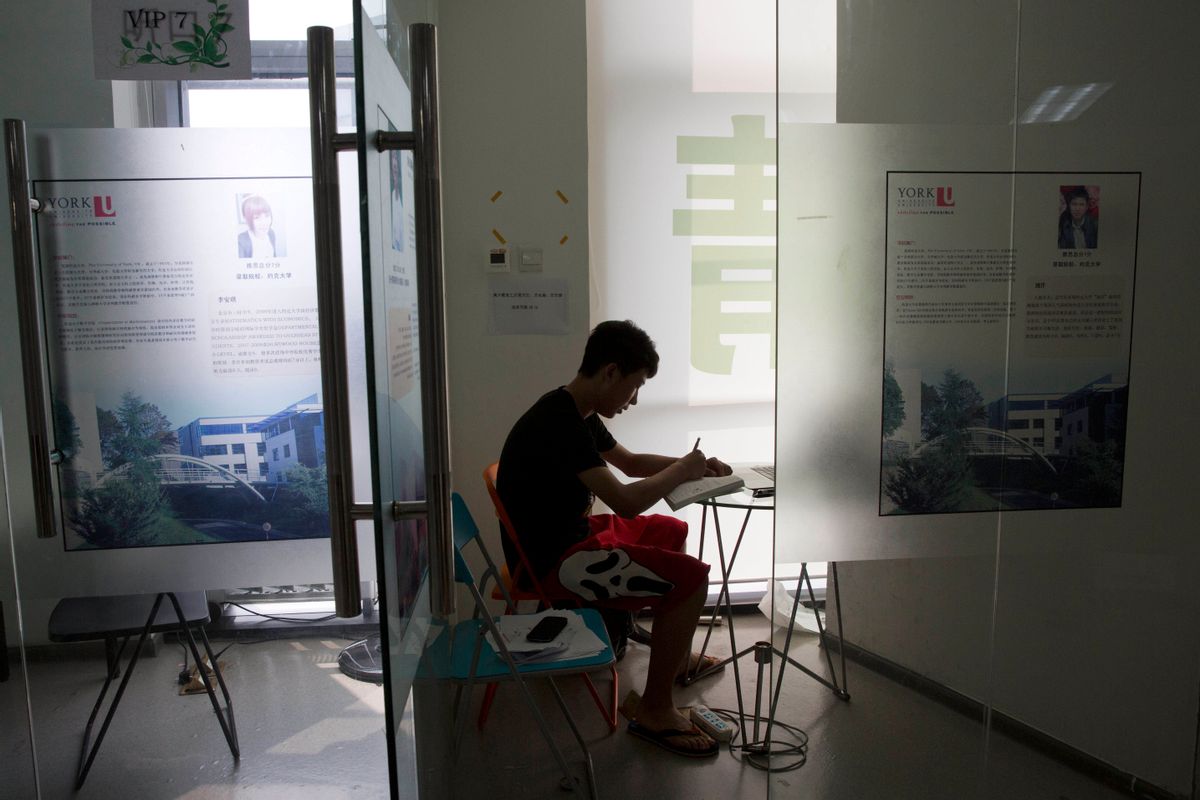 HOLD FOR STORY BACK TO SCHOOL CHINA HIGH SCHOOL IN AMERICA In this photo taken Thursday, June 26, 2014, 16-year-old Zhang Kaisheng studies near advertisements for oversea schools at Focus Education, a tutoring and consulting agency in Beijing, China. Like a growing number of Chinese teenagers, Zhang plans to enroll this fall in a private U.S. high school where he and his parents hope he will get a more well-rounded _ if far more expensive _ education. Tuition, room and board can cost around $40,000 _ three to four times more than an elite private school in China. (AP Photo/Ng Han Guan) (Ng Han Guan)
--

Cairo's proposal calls on Israel to ease its siege of the Gaza Strip but stops short of including Hamas' demand for a full lifting of the blockade.

2. IRAQ'S INCUMBENT PREMIER FIGHTS TO HOLD ON TO POWER

Nouri al-Maliki has lost the support of Iraqi politicians, the international community and Shiite powerhouse Iran.

The actress created on-screen magic with Humphrey Bogart in "To Have and Have Not" and "The Big Sleep" — and off-screen magic in one of Hollywood's most storied marriages.

The 63-year-old actor hanged himself with a belt and was found dead in a bedroom at his home by his personal assistant, authorities say.

Authorities in Ferguson, Missouri, say death threats prompted them to withhold the name of the officer who fatally shot black teenager Michael Brown.

Despite a history of persecution, South Korea now has ten times as many Catholics as half a century ago.

7. HOW EBOLA, EVEN WHEN CURED, CAN BE A CURSE

Kadiatou Fanta, a 26-year-old Guinea medical student who survived the disease, finds herself shunned by her family and professors, who fear being contaminated.

With the rise of a richer middle class in China, high schoolers head to the U.S. in record numbers.

9. WHO IS FEELING THE HEAT IN TIMES SQUARE

Costumed characters are receiving less in tips because police leaflets that tell tourists they don't have to tip them.

10. WHERE DOUBLE AND TRIPLE WORDS RULE

Buffalo is hosting the 25th National Scrabble Championship on Sunday with over 500 players from 11 countries competing for the top title.