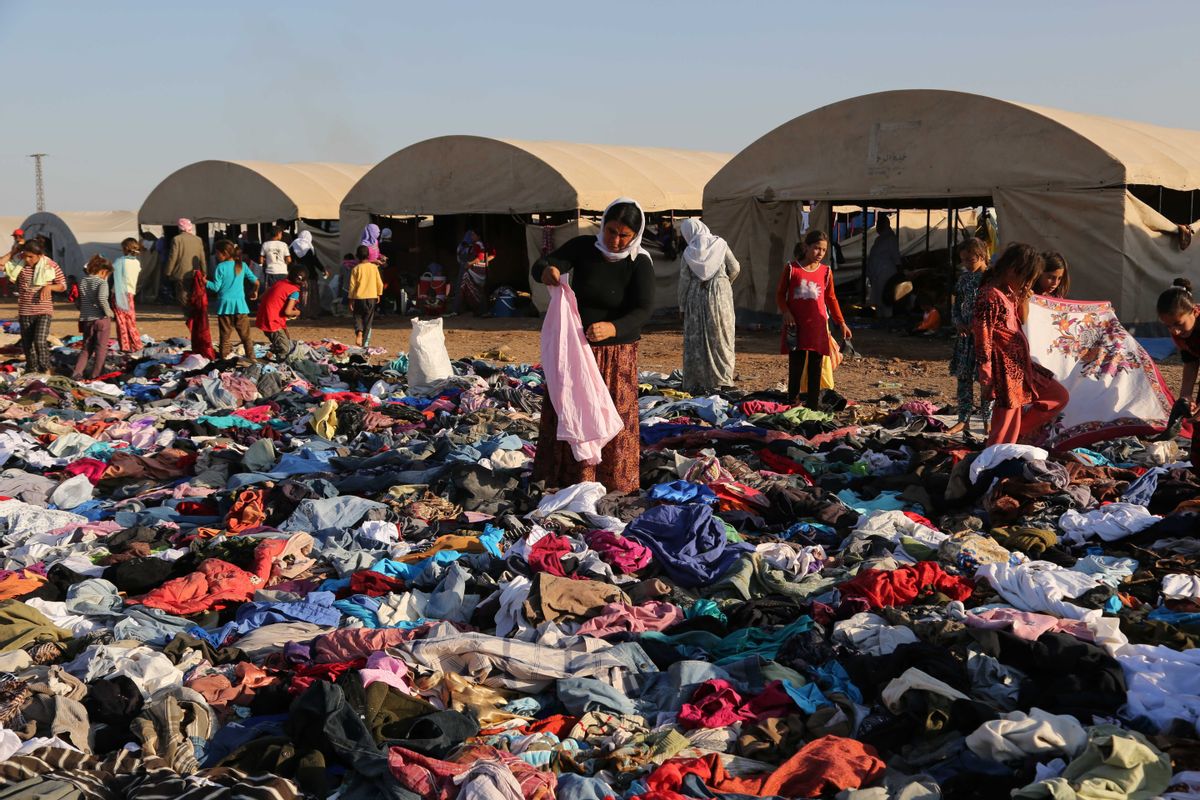 Displaced Iraqis from the Yazidi community look for clothes to wear among items provided by a charity organization at the Nowruz camp, in Derike, Syria, Tuesday, Aug. 12, 2014. In the camps here, Iraqi refugees have new heroes: Syrian Kurdish fighters who battled militants to carve an escape route to tens of thousands trapped on a mountaintop. While the U.S. and Iraqi militaries dropped food and water to the starving members of Iraqs Yazidi minority, the Kurds took it on themselves to rescue them, a sign of how Syrias Kurds, like Iraqs, are using the regions conflicts to establish their own rule. (AP Photo/ Khalid Mohammed) (AP)
--

The 63-year-old actor hanged himself with a belt and was found dead in a bedroom at his home by his personal assistant, authorities say.

For the past few days, Syrian Kurdish fighters have been rescuing members of Iraq's Yazidi minority, tens of thousands of whom fled Islamic militants and took refuge on a mountaintop.

3. SALE OF CLIPPERS GOES THROUGH

A court affirms the right of Donald Sterling's estranged wife to sell the NBA team to ex-Microsoft CEO Steve Ballmer for a record $2 billion.

The actress created on-screen magic with Humphrey Bogart in "To Have and Have Not" and "The Big Sleep" — and off-screen magic in one of Hollywood's most storied marriages.

5. HOW EBOLA, EVEN WHEN CURED, CAN BE A CURSE

Kadiatou Fanta, a 26-year-old Guinea medical student who survived the disease, finds herself shunned by her family and professors, who fear being contaminated.

He says people must comfort each other "in a way that heals, not in a way that wounds" in the wake of unarmed teen's death in suburban St. Louis.

Kiev insists that more than 260 trucks purportedly carrying humanitarian assistance from Moscow should be first inspected by the Red Cross.

The targeting of places of worship — where Israel says weapons often are stockpiled — is viewed by the Palestinians as an attack on integral parts of the social fabric.

The receding shoreline is causing concern about drought in a region that's home to 40 million people and 4 million acres of farmland.

The $2.4 billion Revel resort fails to find a buyer — even for pennies on the dollar — and will shut down in September.