Remember all that babble about WH aides at a hospital bed refusing to allow wiretapping? The truth is more complex 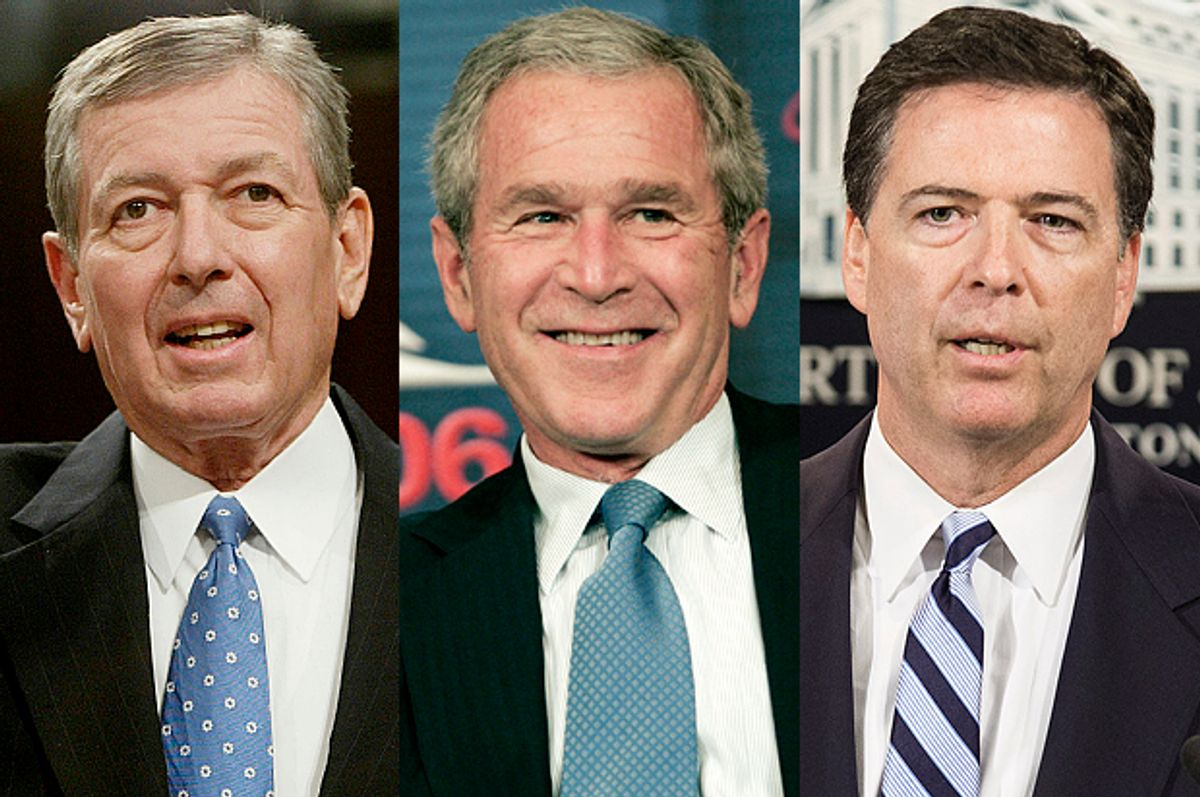 There's a heroic tale about how a number of officials from the Department of Justice faced down the Bush White House in 2004, forcing the president to rein in his illegal spying.

Then Deputy Attorney General Jim Comey sprinted up hospital stairs to arrive "only a matter of minutes" before Alberto Gonzales tried to force a gravely ill Attorney General John Ashcroft to reauthorize domestic wiretapping, the tale describes in cinematic detail. After Gonzales failed, but the president reauthorized his illegal wiretapping program anyway, a number of top DOJ officials threatened to resign. "I couldn't stay, if the administration was going to engage in conduct that the Department of Justice had said had no legal basis," Comey explained in 2007 Senate testimony. As a result, President Bush agreed to shut down the domestic collection and data mining of Internet metadata, among several other things.

So it was that men of Justice forced a lawless presidency back within the bounds of law.

That's the story that's long been told in public, anyway.

This week, the government released new details of a different story, one that has remained hidden for a decade.

We've known for the last year -- thanks to a draft inspector general's report leaked by Edward Snowden -- that those same hospital heroes didn't permanently shut down the collection they found had no legal basis. Instead, they got the secret Foreign Intelligence Surveillance Court to approve it under a provision -- the pen register authority -- that no one had ever before imagined could be used to collect data on masses of people at once. On Monday we saw, for the first time, the arguments the hospital heroes made to presiding FISC Judge Colleen Kollar-Kotelly, in a Memorandum of Law signed by Ashcroft, Comey, then-Office of Legal Counsel head Jack Goldsmith, and then-Counsel for Intelligence Policy James Baker, to convince her to approve the collection they themselves would not approve. (Comey is now the FBI director and Baker is the FBI's general counsel.)

Essentially, they argued both she -- an Article III judge -- and Congress must have their power gutted to protect the president's power.

DOJ told Kollar-Kotelly she had no authority to do anything but approve their expansive plan to collect Internet data from telecom switches. "[T]he Court 'shall' authorize a pen register ... if an application brought before it complies with the requirements of the statute." Even though, by collecting Internet metadata in bulk, the government would take away FISC's authority to review whether the targets were agents of a foreign power, DOJ argued she had no authority to determine whether this bulk data -- which she deemed an "enormous" amount -- was "relevant" to the FBI's investigations into terrorism.

And that meaning -- which the government expanded even further in 2006 to claim the phone records of every single American were "relevant" to the FBI's standing terrorism investigations -- "requires no stretching of the ordinary meaning of the terms of the statute at all," they claimed, in apparent seriousness.

DOJ further argued that's the way the FISA court -- which Congress created in 1978 to provide real judicial review while permitting the executive to keep its foreign spying secret -- is supposed to work. Having FISC rubber-stamp the program they themselves had refused to authorize "promotes both of the twin goals of FISA," DOJ argued, "facilitating the foreign-intelligence collection needed to protect American lives while at the same time providing judicial oversight to safeguard American freedoms."

Judicial oversight, mind you, they were aiming to and largely succeeded in rendering meaningless.

The memo's focus on Congress -- at least what appears in unredacted form -- is much more circumspect, but perhaps even more disturbing.

DOJ pointed to language showing Congress intended pen registers to apply to the Internet; they pointed to the absence of language prohibiting a pen register from being used to collect data from more than a single user, as if that's the same as collecting from masses of people and as if that proved congressional intent to wiretap everyone.

And then they dismissed any potential constitutional conflict involved in such broad rereadings of statutes passed by Congress. "In almost all cases of potential constitutional conflict, if a statute is construed to restrict the executive, the executive has the option of seeking additional clarifying legislation from Congress," the heroes of the hospital confrontation admitted. The White House had, in fact, consulted Majority Leader Tom DeLay about doing just that, but he warned it would be too difficult to get new legislation. So two months later, DOJ argued Congress' prerogative as an independent branch of government would just have to give way to secrecy. "In this case, by contrast, the Government cannot pursue that route because seeking legislation would inevitably compromise the secrecy of the collection program the Government wishes to undertake."

The same heroes of the hospital confrontation, lionized for the last decade for their courageous defense of the rule of law, thereby gutted the separation of powers, in secret. All to serve still more secrecy ... and the power of the presidency they purportedly reined in two months earlier.

They may have won Bush -- and themselves, who otherwise would have signed off on an illegal program -- legal cover by doing so. But in the process they corroded the balance of powers enshrined by the Constitution, turning the FISC into a place where expansive executive branch programs get rubber-stamped in secret.