Gun nuts' alcohol debacle: Why their new booze scheme is the scariest yet

Texas gun owners want to expand their rights again. And this time the NRA may not be able to contain its lunatics 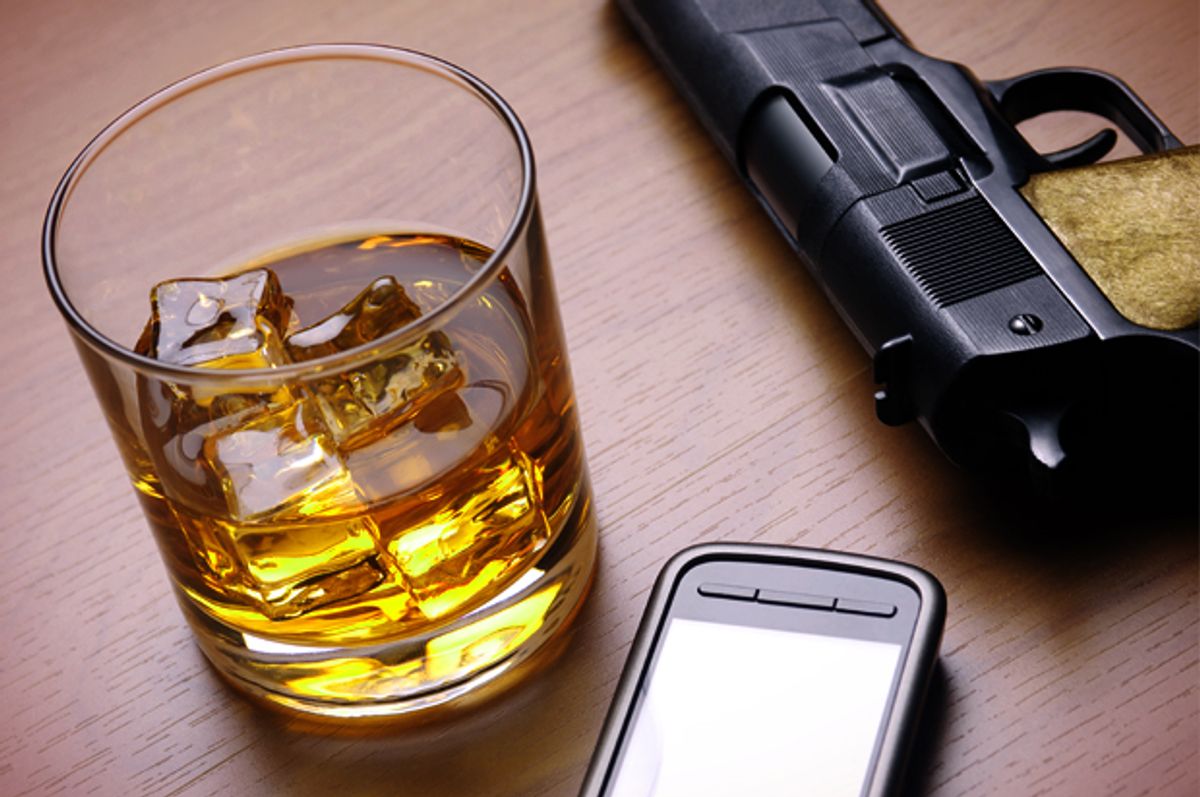 A couple of months ago, the NRA put out a little advisory about the open-carry protests pointing out that seeing a bunch of goofy-looking dudes and dudettes with rifles slung across their chests, wandering around Starbucks and Target like a bunch of blind salmon, seemed to be scaring the regular folks. They suggested this might not be the best P.R. approach. Unfortunately, the poor fellow who made that mistake was smacked down hard by the NRA suits and they publicly apologized. It seems even they don't have the freedom to say what they think about guns without getting some blowback from people who have serious firepower and aren't afraid to use it --- their own members. The New York Times reported on the flap at the time:

“The truth is, an alert went out that referred to this type of behavior as ‘weird’ or somehow not normal, and that was a mistake. It shouldn’t have happened,” Chris W. Cox, the group’s chief lobbyist, said in an interview on Tuesday on an N.R.A.-hosted program that was posted on the group’s website on Wednesday.

“The National Rifle Association supports open carry,” Mr. Cox said. “We support concealed carry. We have led the charge across the country to not only protect our members’ rights to self-defense, but to expand it.”

It would appear that Texas gun owners want to expand their rights yet again. And you won't believe what new right their creator endowed them with this time: the right to sell alcohol at gun shows. What could go wrong?

Right now, the state doesn't allow venues with liquor licenses to sell booze until after the show is finished and everything's been put away. But a Dallas gun club wanted to be able to party while they purchase their firearms and the alcohol control board figured it was a good idea. They did stipulate that the guns be "disabled" and that you could not pick up your shiny new gun at the show. But it still sounds like a rollicking good time.

The NRA, however, sounds very skeptical about this plan. It put out another one of those "advisories" telling members that this new rule could "devastate" NRA events in Texas. They claim that it would prevent the Friends of the NRA from meeting at hotels and other places where alcohol is served (even if there was no alcohol at the event). This would lead to a shortfall in fundraising for the NRA, a truly devastating prospect. (They don't say it, but it's fair to assume this would have a devastating effect on the  state's economy as a whole considering just how many of these gun shows and other gatherings seem to be scheduled on any given day in Texas.) But they claim that the real rub, naturally, is the idea that these events would require that guns be "disabled" and that the responsible drunk gun owner would be unable to take his new weapon home that very day. (Undoubtedly, the founders turned over in their graves at the idea of such authoritarianism in the land of the free. What is this, Cuba?)

It would seem the NRA learned its lesson. Rather than telling its members that they are scaring the public by proposing to do something so ridiculously dumb that only a zealot or a fool would even propose it, they have very cleverly spun the proposed event to be an infringement on their God-given Second Amendment rights rather than an expansion of it. If they handle this carefully they may even get their responsible gun owners to hold some open-carry events at the alcohol control board meeting. They can demonstrate their reverence for the Constitution directly and make it clear that they won't stand for having their rights restricted by allowing them to drink alcohol while they purchase their deadly weapons. That'll show 'em.

The NRA is protecting its brand. They undoubtedly know very well that the evidence shows guns and booze are a very lethal combination. (Common sense shows that.) In fact, scientific studies reveal that gun owners are particularly vulnerable to the siren call of the demon rum. This survey from the British Medical Journal paints a picture of a population that is a serious risk to public safety. According to Melissa Healey of the L.A. Times, the data are quite frightening. If you are a gun owner:

And compared with gun owners who kept their firearms at home unloaded and under lock and key, those who said they sometimes carry a loaded weapon for personal protection or who keep a weapon loaded and unlocked around the house were more likely to do things like drink and drive, and to engage in what substance abuse researchers call "binge drinking."

Healey reports that at least one-third of firearm-related deaths are alcohol-related, which added up to almost 400,000 of them in the U.S. between 1997 and 2009. And a survey of risk behaviors conducted under the auspices of the Centers for Disease Control and Prevention in 1996 and 1997 found that nearly 35 percent of all suicides and homicides are alcohol-related.

That hasn't stopped some states from legalizing the concealed carry of weapons in bars, unfortunately. Georgia is the latest state to do so just this year. In fact, Georgia is allowing people to carry guns pretty much anywhere. And it's worked out so well. Remember this?

According to witnesses who spoke with WSB-TV, the man wandered around the Forsythe County park last Tuesday night showing his gun to strangers, telling them “there’s nothing you can do about it.”

“Anyone who was just walking by – you had parents and children coming in for the game – and he’s just standing here, walking around [saying] ‘You want to see my gun? Look, I got a gun and there’s nothing you can do about it.’ He knew he was frightening people. He knew exactly what he was doing,” said parent Karen Rabb.

Rabb said that the man’s intimidating behavior panicked parents causing them to hustle children who were there to play baseball to safety after the man refused to leave.

“It got to the point where we took the kids and brought them into the dugout and the parents lined up in front of the dugout,” Rabb said.

Police report they received 22 calls to 911 reporting the man.

The police came and informed the parents that the man had done nothing illegal. And that's what has the NRA worried. They lost at least 22 supporters that day and probably a lot more, many of them people who are probably fine with guns in the abstract but don't think it makes a lot of sense to let people run around little league fields brandishing guns while their kids are playing. These are people who don't care if you want to own guns but don't feel very comfortable when a whole groups of people who, let's face it, don't exactly appear to be well-trained Navy SEALs, are clumsily tromping all over Wal-Mart with long guns bouncing off their backs. You know, normal Americans who understand without having to be told that putting a bunch of gun fetishists in the same room with a full bar is just plain dumb.

Unfortunately for the NRA, all common sense will be opposed by their most fanatical followers these days so they have to fool them into thinking that proposals expanding their rights will actually restrict them. Let's have a toast to their success.