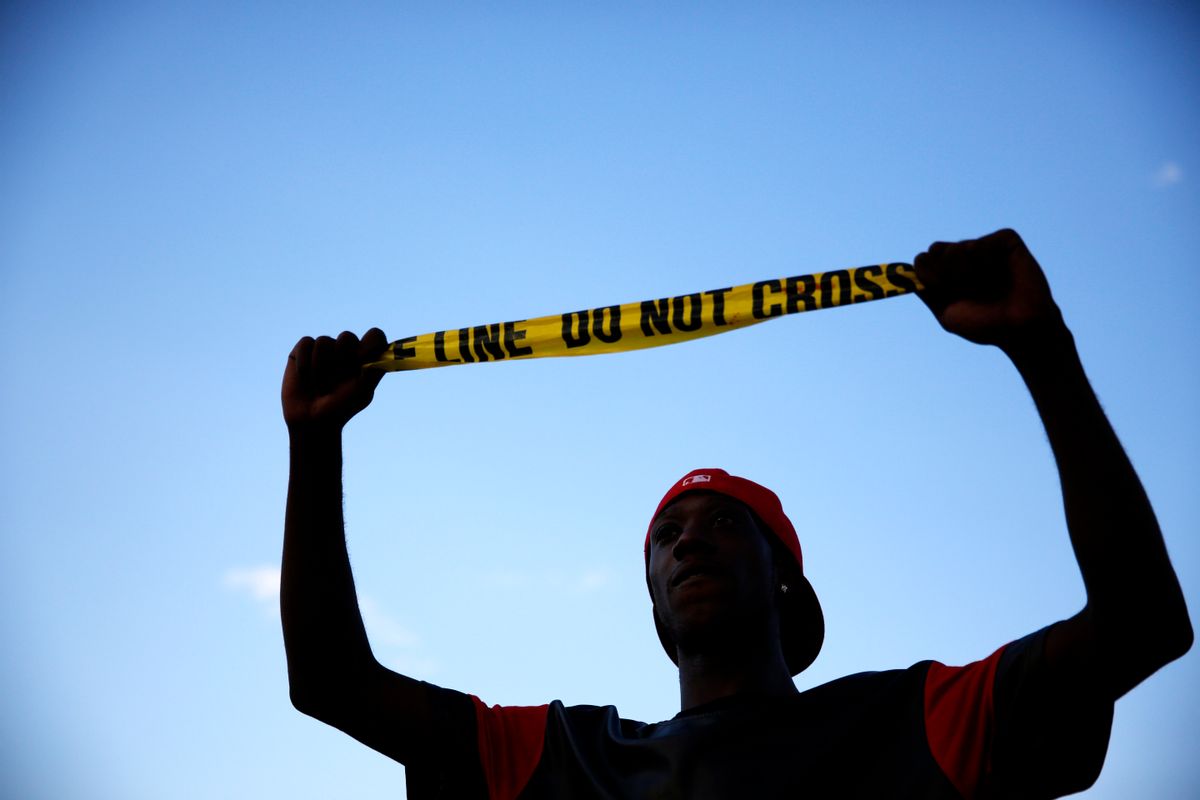 Amidst the constant barrage of updates coming out of Ferguson, Mo., the progression of events and conflicting testimonials surrounding the fatal shooting of teenager Michael Brown can be hard to grasp. There has been the initial police briefing of the incident, two eye witness accounts, an account from Ferguson Police Chief Tom Jackson, claiming that Brown was being pursued in conjunction with a robbery, followed by another announcement just hours later that the officer didn't know about the robbery or that Brown was a suspect at all. Here are the major events in chronological order:

18-year-old Michael Brown was shot at 12 p.m. at the Canfield Green apartment complex in Ferguson, Mo., after a heated encounter with a Ferguson police officer. There are three reports as of now: The account of the police, provided incrementally over the past week by St. Louis County Police Chief Jon Belmar; an eyewitness account from Brown's friend Dorian Johnson, who was with Brown at the time of the shooting; and another account from Tiffany Mitchell who saw the shooting when she pulled up in her car on the same street.

It is worth noting that the police account of events have come out extremely slowly. On Friday,

Here are the three accounts compared:

Chief Belmar: "Yesterday at about noon in the 2900 block of Canfield, a Ferguson police officer had an encounter with two individuals on the street. In fact one of those individuals at the time as the officer was exiting his police car, allegedly pushed the police officer back into the car where he physically assaulted the police officer it is our understanding at this point in the investigation that within the police car there was a struggle over the officer's weapon. there was at least one shot fired within the car," he said in a press conference last Sunday, Aug. 10.

Johnson: "It was around 1:40 or 2 o'clock. We were walking down an empty street minding our own business. We're both heading home and the officer approaches us. As he pulls up beside us, he didn't say freeze halt or nothing like we were committing a crime. He said, "Get the F on the sidewalk." I told the officer we were not but a minute away from the destination. He's at an angle where were so close to the door and him, when he tires to thrust the door open aggressively, it doesn't come an inch out before it strikes both of us. His arm extended out the window and grabbed my friend around the neck. [The cop] didn't say step back or anything like that. He started to pull my friend into the window-- so the officer's trying to pull him in and he's pulling away from the officer. [Brown] never once attempted to grab for this officer's weapon. He's still holding my friend with one arm and now with the other hand he's pointing his weapon. The second time he says "I'll shoot," it wasn't even a second later before the gun just went off and the officer let go," he said in an account to local television station KSDK-TV on Wednesday, Aug. 13.

Mitchell: "I arrived at the scene whenever they were tussling through the window. It looked as if the kid was pulling away and the officer was pulling him in. As I came up, I saw the officer pulling him in and i saw him trying to pull away. I pulled out my phone to try to get a video because it just didn't look right. I didn't know exactly what was going on but I know it didn't look right for someone to be wrestling with the police through the police window. I didn't get the video because a shot was fired through the window so I tried to get out of the way," she told Don Lemon on CNN on Wednesday, Aug. 13.

Chief Belmar (cont'd): "After that the officer came back out of the car. He exited his vehicle and there was a shooting that occurred where the officer in fact shot the subject and they were fatal injuries. The entire scene from approximately the car door to the shooting is about 35 feet. There were shell casings recovered, the shell casings are all matched to one weapon thats the officer's weapon, there were more than a few shell casings recovered. I cannot say at this time how many times the subject was struck by gunfire, it's hard to know. It was more than just a couple but I don't think it was many more than that..."

Johnson (cont'd): "That's how we were able to run at the same time. The first car I see I duck behind for cover because I fear for my life. I'm scared, I don't know whats going on. I don't understand why this officer is shooting his weapon at us. And I'm watching the officer; he's pursuing my friend now. Then he fired another shot. He struck my friend in the back, then my friend stopped running. His hands immediately went in the air and he turned around towards the officer face-to-face. He started to tell the officer that he was unarmed and 'you should stop shooting me.' Before he can get his second sentence out, the officer fires several more shots into his head and chest area. And he fell dramatically into the fetal position. I did not hear once he yelled freeze, stop or halt."

Mitchell (cont'd): "As I went to the side, the kid-- he finally gets away and he starts running. As he runs the police gets out of his vehicle and he follows behind him shooting and the kid body-jerked as if he was hit from behind. And he turns around and puts his hands up like this and the cop continued to fire until he dropped down to the ground and his face just smacks the concrete."

That afternoon, the St. Louis County NAACP called for the FBI to investigate the shooting.

The FBI announced that it would investigate the shooting.

Although Ferguson's Chief Tom Jackson had said he would reveal the officer's name by 12 p.m. on Tuesday, the plans were delayed because of threats against the officer made on social media.

Obama addresses the nation, calling on local police to be "open and transparent" in their investigation.

Anonymous releases the name and photograph of Michael Brown's alleged shooter. Ferguson PD and others confirm that the name is incorrect. Anonymous' Twitter account is suspended.

Six-year veteran of Ferguson PD Darren Wilson is identified as the shooter. No other information about him is given. At the press conference, Chief Jackson gives out an incident report about a robbery of a convenience store for which Brown is the primary suspect.The video footage of the robbery is released shortly after. Jackson provides the following report:

From 11:48 to noon, the officer involved in the shooting was on a sick call on Glenark [Drive], there was an ambulance present. At 11:51 there was a 911 call from a convenience store nearby. At 11:52, dispatch gave a description of a robbery suspect over the radio. A different officer arrived at the store where the strong-arm robbery occurred. A further description was given over the radio that stated the suspect was walking toward QuikTrip. The officer left the sick call. He encountered the– At 12:01, our officer encountered Michael Brown on Canfield Drive. At 12:04 a second officer arrived on the scene immediately following the shooting. At 12:05 a supervisor was dispatched to the scene and subsequent officers arrived. There have been some questions about the calling of an ambulance. The ambulance that was at the sick case at Glenark was coming by immediately following the shooting and they did respond to assess Michael Brown.

Jackson held a second press conference at 3:00 p.m. during which time he said that the robbery was unrelated to the fatal shooting, and that the cop couldn't know that Brown may have been a suspect. The officer actually stopped the pair because they were in the street blocking traffic. Why did Jackson release the incident report and further information about the robbery? Because "the media asked for it."