Colorado Rep. Mike Coffman, Kentucky Sen. Rand Paul and most of the GOP are breaking this rule really badly!! 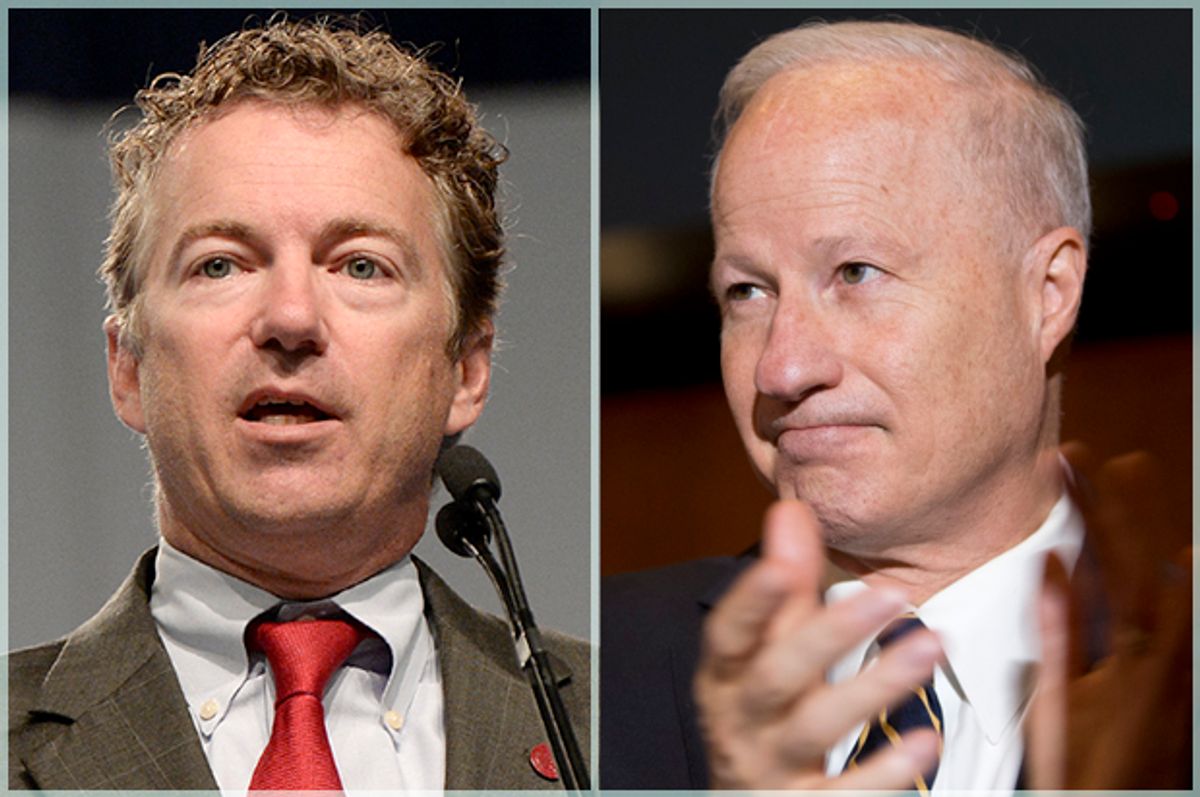 A Republican from Colorado couldn't remember the words "birth control" when, during a Thursday debate, he was asked a question about reproductive rights. After saying he did not support personhood (which is nice of him, I guess), Rep. Mike Coffman said, "But I support a woman’s access to, um, certainly, to … this Hobby Lobby decision to … um."

A campaign representative clarified that Coffman meant to say that he supports the Supreme Court's Hobby Lobby decision, "but also supports maintaining access to birth control," according to the Denver Post.

Coffman is one such dummy.

First, he wants to repeal the Affordable Care Act, the reason that your health insurance (if you have it) covers 100 percent of the costs of different methods of contraception, from the pill to the copper IUD. Second, Coffman voted to defund Planned Parenthood, which provides affordable reproductive healthcare -- including birth control -- to people in Colorado and elsewhere. Third, Coffman, even though he had a really hard time saying it with grown-up words, is down with Hobby Lobby and letting your boss determine how you can use your paycheck and what kind of healthcare you should have access to.

So, no, dummy Mike Coffman, you do not support maintaing access to birth control.

But Coffman is not the only dummy making this dummy point! This week, another dummy named Rand Paul said during an interview that he is really proud of the personhood measure he proposed in March. The bill, if passed, would give equal rights to "each born and pre-born human person." Not only would such a measure criminalize all abortion, it would also ban any method of contraception that a person believes is equivalent to an abortion, regardless of medical evidence to the contrary. As we saw in the Hobby Lobby case, despite the fact that none of the contested methods of contraception were abortion drugs, the Green family had many feels that Plan B One-Step and the rest were the same thing as abortion, and the high court took their word for it because the Green's feels were sincerely held feels.

But a week before Paul made his dummy statement about his personhood proposal that could ban different methods of contraception, he told a crowd in Iowa that no one in the GOP "wants to ban birth control."

And here's the other thing. Most of the anti-choice conservative pushback on Hobby Lobby and against accusations that the GOP is gunning to ban birth control goes something like, "We aren't banning birth control! It's still available for you to go out and buy at the store or something!"

Now, this argument falls apart when you consider the personhood business, and the fact that only select forms of emergency contraception are available over the counter. But it also makes no sense if you think about contraception as really a matter of access more than anything else.

Let's say you are one of the millions of people in this country living at or below the poverty line. You are hungry, and you happen to live across the street from a well-stocked supermarket. You have a need, but you can't meet your need. Because you are broke. So you are hungry a lot, even though you could spit at the supermarket from your front window. That's a problem of access. Cost barriers are access barriers.

The same thing goes for people who need contraception, but don't have the resources to get it. If your employer insurance won't cover it or if you don't have Medicaid because your dummy governor rejected it, then you may be paying out of pocket for something that can cost up to $50 each month. If you want the copper IUD, that's more than $1,000 in some places for that method of highly effective, long-term birth control. So you might live right across the street from a doctor's office, or even down the block from a pharmacy that sells emergency contraception like Plan B over the counter, but you can't afford it. So you're shit out of luck if you want to avoid getting pregnant or take birth control for reasons that aren't related to pregnancy.

But dummies like Coffman and Paul can't see this, probably because they don't think much about poverty or reproductive justice. So instead, they go and say they are for something that they really aren't for at all. They break the rule.

So now that we have the rule, we should probably establish consequences for non-compliance. I vote 1) Losing your election 2) Having to listen to Mike Huckabee say "Uncle Sugar" over and over again until they pass out 3) Spending some time with working women who struggle to afford the basics, including food and medical care, so that they maybe smarten up a bit.

All of that, or, I don't know, getting stuffed into a locker by Joe Biden. We can debate the finer points of consequences later, but the rule itself is solid.