Why I want my articles removed from Thought Catalog

When I started writing for the site, I loved its confessional intimacy. But now I don't recognize what it's become 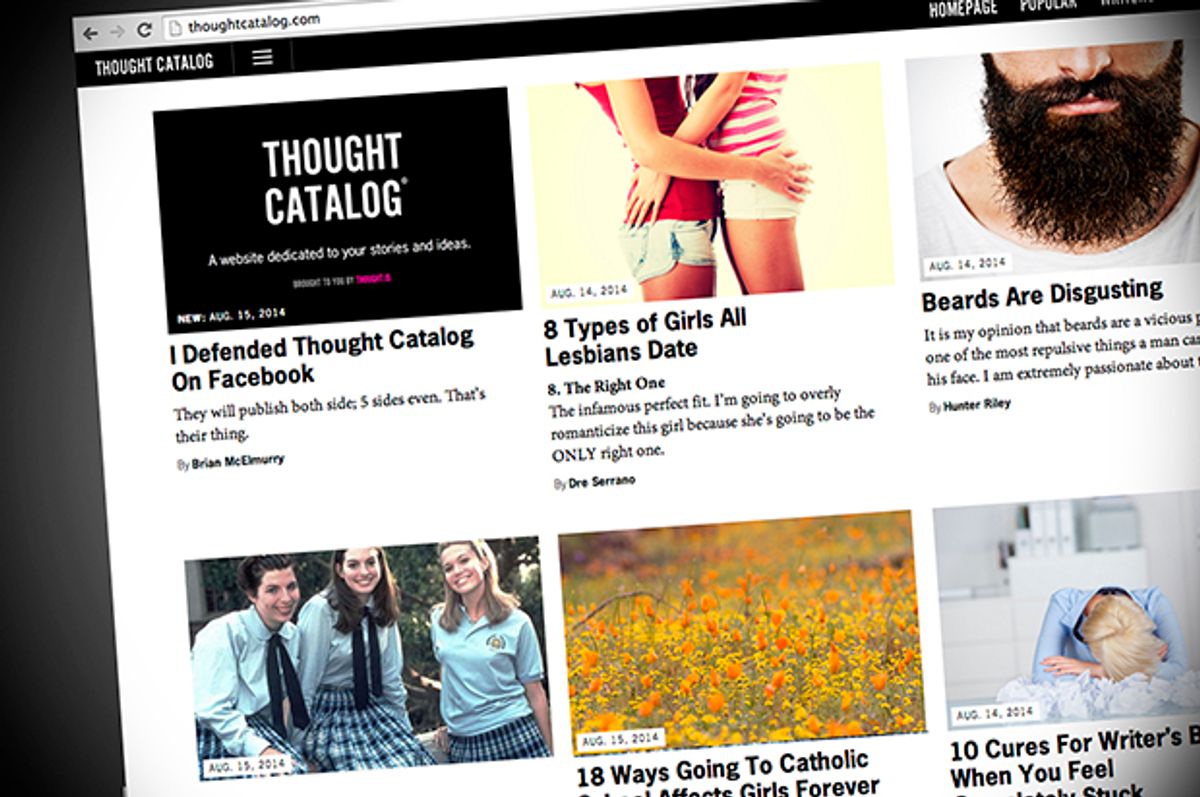 Thought Catalog recently ran one of the most vitriolic, disgusting, transphobic rants I'd ever read in a mainstream outlet. I won't be linking to it (they win if you link to them). Salon already picked apart the inane, horrible things the author had to say, so I won't recount those things either. But it gets worse than that piece. After Thought Catalog broadcast the aforementioned bit of bigotry, it promoted an overtly racist article likening the riots in Ferguson to a rap video.

For a while, Thought Catalog's mantra of “all thinking is relevant" seemed revolutionary to me; its articles were intimate and diary-esque in a way that I found irresistible. But this creed has become a justification for publishing any and all content, regardless of quality. And that's why I refuse to have my writing on the site anymore.

In July, Thought Catalog co-publisher Alex Magnin told the New York Times his website was predicated on “certain identities or badges that people want to share with their friends to self-represent.” He also said Thought Catalog was “absolutely, a page-view driven site” though he added they didn't necessarily want to be.

I started reading Thought Catalog in 2012. I hadn't heard of it until a BuzzFeed content regurgitator I followed on Twitter at the time tweeted “Thought Catalog is the WORST” or something along those lines. I looked up the site and enjoyed it. I thought the BuzzFeed person was just upset Thought Catalog could make lists go viral without spending time ripping pictures from Reddit.

Thought Catalog had some amazing writers on staff when I first discovered it: Gabby Dunn,  Steph Georgopulos, Chelsea Fagan (who still works there but not as a writer) and others. I liked Thought Catalog so much I started writing for it.

Those things aren't true anymore. Thought Catalog still presents itself as an avant garde marketplace for ideas. However, in reality, I've come to think of it as an amalgam of the irredeemable parts of BuzzFeed, Upworthy, Reddit and the rest of the viral Web.

I know the rise of Facebook sharing has forced many websites to resort to crappy viral content in order to make money. But the gleeful posting of blatant hate-speech is something else entirely.

And so this morning I asked the site to take down all my 100+ articles. At the time of writing, they have yet to answer and my articles are still there.

Please note I'm not trying to slander all the writers there. This is a disappointing outcome for me. Thought Catalog was the first website to publish my non-sports writing. At the risk of sounding lame, I felt like a real writer the first time I got published on Thought Catalog. And the site still has some incredible writers now, both on staff and contributing as freelancers. I follow quite a few on Twitter. But even more unforgivable than making good writers write bad things (why would you make good writers copypasta from Reddit?) is intentionally letting bad writers write bad things.

Thanks for publishing me, Thought Catalog. It meant so much to me back then. And thanks to the writers and editors at Thought Catalog who continue to try to right the ship.

Matt Saccaro is a writer whose work has appeared on Salon, The Week, and The Daily Dot. Follow him @mattsaccaro