Pity the billionaire Republican donors, trying to choose among Christie, Walker and now-indicted Rick Perry for '16 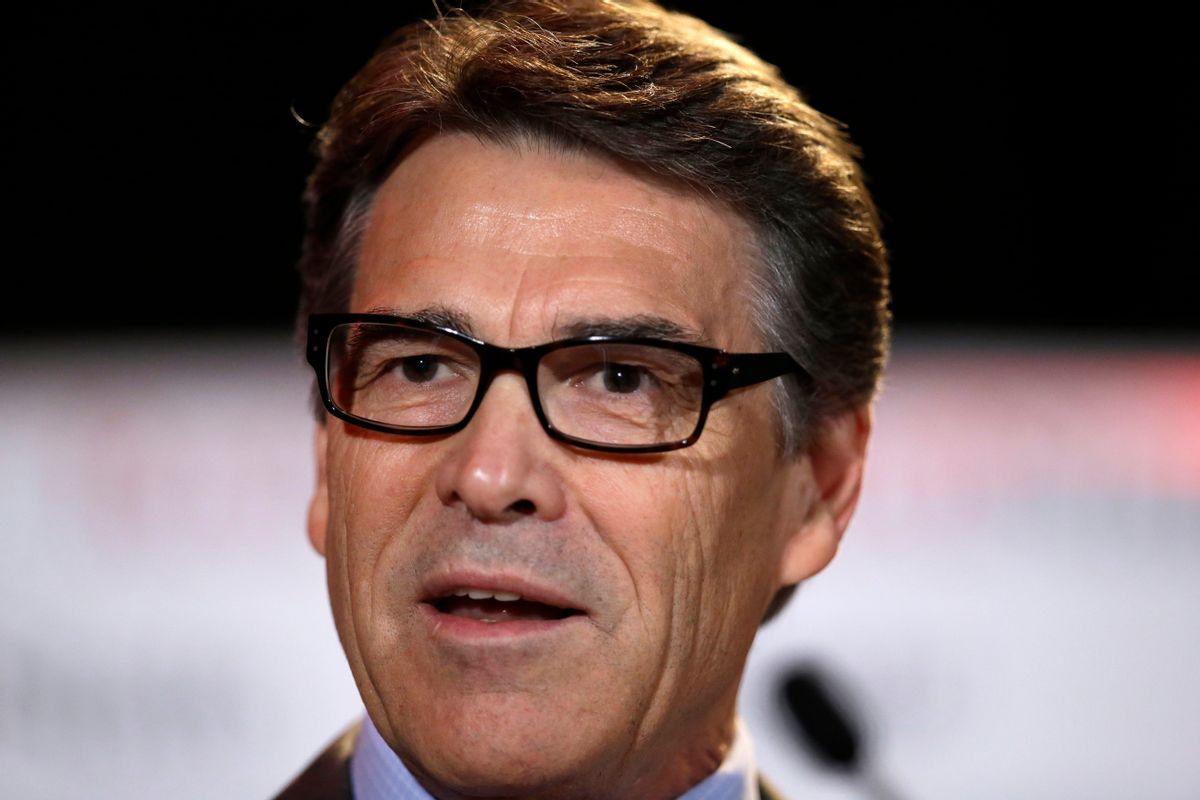 FILE - In this Friday, Aug. 8, 2014, file photo, Texas Gov. Rick Perry delivers a speech to nearly 300 in attendance at the 2014 RedState Gathering, in Fort Worth, Texas. Perry was indicted on Friday, Aug. 15, 2014, for abuse of power after carrying out a threat to veto funding for state public corruption prosecutors. (AP Photo/Tony Gutierrez, File) (AP)
--

There was a time, long ago, when the Beltway media had a comforting narrative for Republicans, as they faced the loss of Mitt Romney and Paul Ryan in 2012. And it was: Unlike the Democrats, who were relying on flawed hero Hillary Clinton, the GOP had a “deep bench” of candidates for 2016, one that was especially thick with pragmatic governors.

But that bench has been splintering for a while, and now it’s a small pile of wood shavings that might be used as tinder for a fire that could ignite in 2020 or later – or not. Actually, it's probably not even that useful.

Now, shockingly, Texas Gov. Rick Perry has been indicted for his role in a state scandal, on Friday night. The charges center on Perry's decision to veto funding for the office of Travis County District Attorney Rosemary Lehmberg, charged with investigating public corruption – her office’s work indicted former Texas congressman Tom DeLay in 2005 – after she was arrested for drunk driving.

Back when Perry vetoed the funding, Lehmberg was investigating the state’s Cancer Prevention and Research Institute of Texas, after multiple allegations of corruption under Perry, including the indictment of one official for mishandling a multimillion-dollar grant.

Talking to MSNBC’s Steve Kornacki, longtime Texas journalist Jim Moore said it looked like “Perry is trying to circumvent being investigated by anyone.” He noted that Lehmberg served 45 days in jail for her drunk driving conviction, even though there is “a long record in this state of forgiving people and electing them to office” after such crimes. That might sound like a lame liberal excuse, but Moore didn't even  mention the most famous Texas DWI arrest, that of future governor and president George W. Bush.

Indicted by a county grand jury, it’s still possible Perry will beat the charges. It’s also worth noting that Democratic Gov. Andrew Cuomo faces investigation for comparable allegations of interfering with an agency charged with investigating political wrongdoing by allies. If Clinton wasn't in the 2016 wings, Cuomo's troubles would be bigger national news. Now that Perry's been making aggressive moves right, making it pretty obvious he wants to run in 2016, this is generating big headlines even on a big-news weekend.

Imagine being a billionaire Republican donor: What would you do, surveying the GOP field, if you wanted to avoid the extremism of Sen. Ted Cruz and the eccentric, occasionally libertarian stylings of Sen. Rand Paul, two relative electoral neophytes. You'd likely be crossing Rick Perry off your list tonight, even if you sympathize with his political troubles. "Indicted, but not convicted" isn't the best slogan for a presidential candidate. There are better slogans for Republicans; Dave Weigel jokingly suggests "Romney 2016: Still not indicted." I'm not sure that's the winner, either, but Romney is more likely to be nominated than Rick Perry right now.