Would it surprise you to learn just how revolutionary that A/C unit of yours really is? 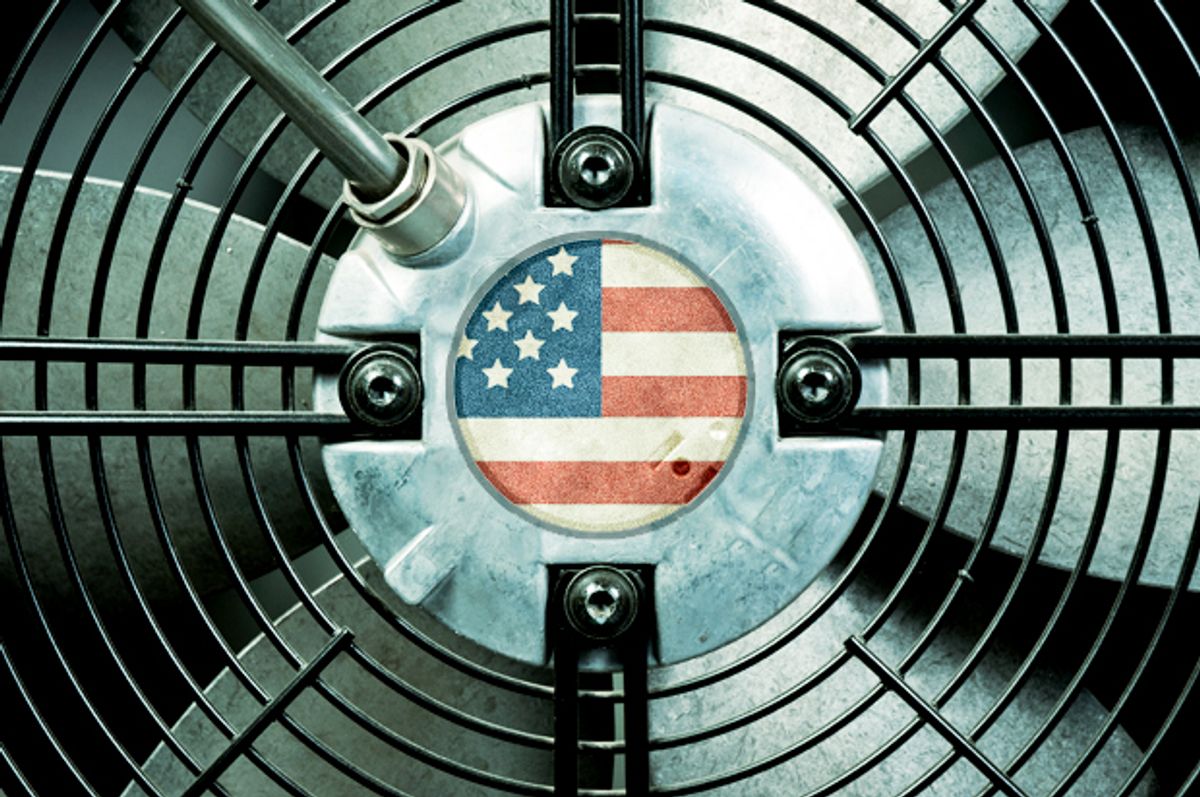 A friend of mine, visiting Brooklyn, drove down to Coney Island on a recent summer weekend. He remarked with some surprise that kids in Kings County still played in the spray of fire hydrants, “like they do in the old photos.” It’s true: Crossing the borough on the muggiest days of summer vacation, it’s not unusual to see a popped valve spurt cool water across the asphalt, transforming a street into a jury-rigged Splish Splash for neighborhood kids.

Yet such impromptu playgrounds seem to belong firmly to another era. Mid-century Greenwich Village, immortalized by Jane Jacobs in "The Death and Life of Great American Cities," teemed with children every afternoon. “This is the time of roller skates and stilts and tricycles, and games in the lee of the stoop with bottletops and plastic cowboys,” she wrote in 1961. "They slop in puddles, write with chalk, jump rope, roller skate, shoot marbles, trot out their possessions, converse, trade cards, play stoop ball, walk stilts, decorate soap-box scooters, dismember old baby carriages, climb on railings, run up and down.”

As Alex Marshall, a fellow at the Regional Plan Association in New York, noted in a recent Daily News piece, that description far surpasses anything you can find on Hudson Street today, or most other places in America. Our culture has changed. Childhood is now zealously supervised; in July, a South Carolina woman was arrested for letting her 9-year-old play in a park while she was at work.

The environment has changed too: Summer in the city isn’t as hot as it used to be, thanks to air conditioning. When Jane Jacobs described the “sidewalk ballet,” fewer than 14 percent of households in urban America had air conditioning. Today, it’s over 87 percent.

It’s almost impossible to imagine, dashing from the house A/C to the car A/C to the office A/C to the restaurant A/C, how hot and different the American summer once was.

One evocative recollection of the un-air-conditioned American city is Arthur Miller’s vignette “Before Air-Conditioning,” which describes New York in the summer of 1927. The street in those days was repurposed nightly as an outdoor dormitory; mattress-laden fire escapes lined the block like iron bunk beds.

Lacking that option, there was always Central Park, where Miller would "walk among the hundreds of people, singles and families, who slept on the grass, next to their big alarm clocks, which set up a mild cacophony of the seconds passing, one clock’s ticks syncopating with another’s. Babies cried in the darkness, men’s deep voices murmured, and a woman let out an occasional high laugh beside the lake.”

That was the year Babe Ruth hit 60 home runs; then came air conditioning and the reinvention of American life.

The National Academy of Engineering ranked air conditioning the tenth-most important achievement of the 20th century. By 1980, the U.S. consumed more A/C than the rest of the world put together. The annual cost of air conditioning Houston ($666 million) exceeded the GNP of several countries. Air conditioning helped spark the Sun Belt movement, reversing decades of Southern emigration. The population of the Gulf Coast grew from fewer than 500,000 people in 1950 to 20 million today.

There’s a lot of good to say about this progress. Air conditioning makes us more productive, and it might be better, on balance, for the environment than heating. It’s good for your health, and it might even save your life. In Europe, where A/C is far less common, the 2003 heat wave killed more than 70,000 (mostly elderly) people. Critics of air conditioning largely point to its enormous environmental and electrical cost, which makes sense if you consider it an indulgence rather than a necessity. But that’s not the way people in Houston (or even Washington, D.C.) see it.

Its effect on American urban culture is now taken for granted, to the point of being nearly invisible. We can conjure Arthur Miller’s world only as a jittery 16-millimeter newsreel. But in the mid-century decades, a number of American intellectuals greeted the new climate with cynicism. It was, they felt, a technology that flattened not just temperature differentials but the nuances of American life as well.

Henry Miller, returning to the States in 1941 for a road trip, recounted his caustic appraisal in a book he titled “The Air-Conditioned Nightmare.” “Nowhere else in the world is the divorce between man and nature so complete,” Miller wrote, "Nowhere have I encountered such a dull, monotonous fabric of life as here in America.”

In 1970, four years after Texas became the first state in which more than half the population used air conditioning at home, the New York Times editorial board echoed his sentiments. "Because the air conditioner, the airplane and television have smoothed out harsh differences in climate, nearly abolished distance and homogenized popular taste, Americans are become much less regionally diverse.”

The historian Raymond Arsenault, in a famous 1984 essay, threw the book at air conditioning for its culturally deleterious effects on the American South. "Air conditioning has changed the southern way of life,” he wrote,

…influencing everything from architecture to sleeping habits. Most important, it has contributed to the erosion of several regional traditions: cultural isolation, agrarianism, poverty, romanticism, historical consciousness, an orientation towards non-technological folk culture, a preoccupation with kinship, neighborliness, a strong sense of place, and a relatively slow pace of life.

The most striking, immediate impact of air conditioning on America was architectural. Glass boxes with permanently sealed windows, like Mies van der Rohe’s Seagram Building, replaced the E-, U- and H-shaped towers of the previous generation. Vernacular architecture, like the Texas dog-run house or the wrap-around verandas of Louisiana, was rendered obsolete. Through the contemporary invention of the mall, windowless walls, hitherto employed only in mausoleums and theaters, became the dominant style of the American-built environment.

Those same air-conditioned spaces were conducive to both consumerism and, relatedly, a kind of cultural conformity. Americans flocked to movie theaters for Hollywood’s Golden Age, wrapping their legs in newspaper to stay warm. They bought well-known brands at department stores, whose sales floors stood in frigid contrast to the open-air markets of the urban poor. They ate at the same fast-food joints, which adopted air conditioning more readily and thoroughly than their mom-and-pop rivals. (By the ’60s, Arsenault reports, many Southerners had begun to “refuse to patronize non-air-conditioned stores.”)

By the 1970s, when home A/C was commonplace, Americans spent the summer cooling on the couch, watching the same television channels as their compatriots in New York, Atlanta or Los Angeles. We abandoned the dialect of parks and bars and began, quite literally, to speak the same language.

Public space, whose importance and vibrancy bloomed in the heat, suffered from the competition. The great urban amusement parks went out of business. Streets ceased to function as de facto playgrounds; stoops lost their social function. Major League Baseball attendance hit a peak in 1960 that it would not surpass for 20 years. Weegee’s Coney Island beach panoramas, from the 1940s, portray an urban society beyond our collective memory.

To take a summer stroll down a New York street today is to bake in the exhaust of air-conditioned cars and stores. It neatly sums up the message of the air-conditioned city: If you want to keep cool, you need to keep shopping. But then, at least New York still has great public spaces; many Sun Belt settlements and modern-day exurbs do not.

At this point, the cultural cooling of the United States may be little more than a history lesson. But as the Global South takes up its affair with air conditioning, we shouldn’t let the environmental consequences (serious though they are) deflect our attention from the potentially massive cultural transformations underway.

To be air-conditioned, in many countries, is to be modern. And to be Modern. The advent of cooling is often incompatible with traditional architecture — like the lattice walls of northern India, the courtyard homes of the Mediterranean, the narrow windows of the M’Zab, or the stilt houses of Thailand — developed to provide natural ventilation.

Less obvious, and more important, will be the effect that air-conditioned innovations like malls are already having on social life and cultural practices, to say nothing of the development of widespread air conditioning in homes.

One such transformation is already underway in China, where the spread of refrigeration has allowed mass-produced frozen foods to upend home cooking, and cold storage has made traditional preservation methods like salting and pickling unnecessary.

Don’t believe that air conditioning can transform the bedrock of national culture? Just remember 1965, when Houston’s Astrodome opened, and professional baseball – a game to which breezes, sunshine and green grass are as vital as the bat and ball – was transferred (with great acclaim) to an air-conditioned stadium whose grass was made of plastic.

The stadium itself is now a somber ruin, replaced by a modern iteration whose retractable roof is usually open. But it was a symbolic achievement for the air-conditioned city, and drew the American Society of Heating, Refrigerating and Air Conditioning Engineers convention to Houston that year.

It likewise marked the end of an era for urban America, one that Arthur Miller evoked in speaking of that summer of his youth: “Every window in New York was open.”