The most absurd scientific explanations for comic book superpowers

From brain-swapping to blood transfusions gone wrong, here are the most ridiculous superpower origin stories 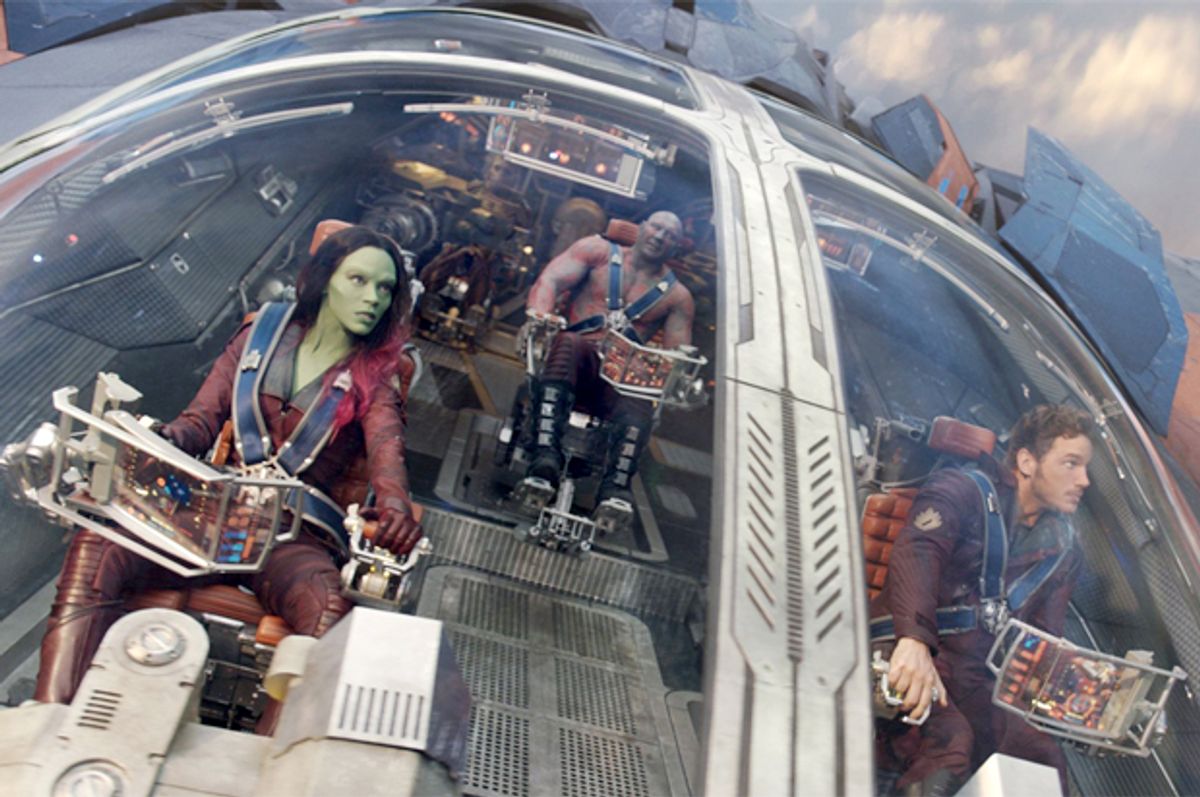 “Guardians of the Galaxy” has been a huge financial and artistic hit for Marvel Studios. Who could’ve guessed a movie featuring a green warrior, a literal-minded musclehead, a trigger-happy raccoon and the musical stylings of the '70s would be such an enjoyable hit? It shows there’s a lot more to Marvel — and comics in general — than superheroes. Comics love sci-fi, too.

In fact, superhero comics could easily be considered a subgenre of sci-fi, at least the kind of soft sci-fi that’s more in the fantasy realm, like “Guardians.” Sure, some superhero explanations are kind of rooted in the real world. Since we pump our athletes full of steroids, human growth hormone and other performance-enhancing drugs, the super-soldier serum that created Captain America seems plausible. President Obama once joked: “Basically I'm here to announce that we're building Iron Man.” The mutants of the Marvel Universe are a result of evolution, which I hear is a thing. Even ideas as out there as the "multiverse" — which will be taken to new heights in Grant Morrison’s forthcoming “Multiversity” — have some basis in real science, specifically superstring theory.

But more often, superhero science is as scientific as voodoo, and even more fun. Some explanations are dumb; many are bonkers. To celebrate the fanciful and insane science of comic books, here’s a look at some of the biggest scientific stretches. Don't try these experiments at home.

Superman was the first superhero, so it’s worth noting that crazy science has been in the DNA of superheroes since day one. The source of Superman’s many powers — the flying, the heat vision, the ice breath, the strength, etc. — is that he’s from Krypton, which has a red sun that isn’t particularly empowering. On Earth, the yellow sun makes Superman the greatest advertisement for solar energy in history. So, as long as you can believe in aliens, solar-powered organic cells, an orphan in a rocket finding the perfect planet, and a guy with Superman’s powers not being a douchebag, the science of Superman makes perfect sense.

Angstrom Levy, a scientist in Robert Kirkman’s “Invincible” universe, tried to -- as a henchmen recalled to him for the benefit of readers -- "download the memories of thousands of your doppelgangers from other dimensions in order to give you the ability to shift from one dimension to the next with the full knowledge of where you’re going.” You’re not going to believe this, but something went wrong. In the middle of this multiversal brain dump, teen hero Invincible got in a brawl with the henchgoons, damaging the equipment and causing an explosion. Levy emerged with the unfathomable brainpower and dimension-hopping skills he sought — plus a hideously deformed body.  As expected, Levy swore vengeance on Invincible. This incident was the contemporary version of when Lex Luthor blamed Superboy for the loss of his hair. The science accident has long been one of comic books’ most dependable sources of amazing superpowers and bogus science, from the Flash in 1940 to goofball brothers Quantum and Woody.

These days, many are worried about eating genetically modified food. Well, if you lived in the Marvel Universe, that would be the least of your worries. Stay with me on this one: It’s a doozy. Early in the days of the Fantastic Four, they faced some Skrulls: green aliens who have the ability to shape-shift, taking on any form, including humans or anything else. Reed Richards — the stretchy Mr. Fantastic and scientist of the group — brainwashed the Skrulls into thinking they were just regular cows, rendering them about as dangerous as any other barnyard animals. Slick move, right? Well, it was until the cows were butchered and people ate the hamburgers, resulting in “Skrullovoria Induced Skrullophobia,” which is not covered by Obamacare. Sufferers gained the shape-shifting powers of the Skrulls, along with an intense fear of the aliens; some formed the “Skrull Kill Krew.” Mad alien cow disease isn’t the most plausible argument for vegetarianism, but it’s an argument.

When Marvel was looking to create a female version of the Hulk, Stan Lee could have gone the radiation route he loved so well. Radiation is a factor in so many Marvel origins — Spider-Man, the Hulk, Daredevil, the Fantastic Four — that you have to wonder if Stan Lee was using Marvel Comics as propaganda for the atomic energy industry. But Lee took a slightly different tack with Jennifer Walkers, cousin of Bruce Banner. After a gunshot wound to the diminutive Walters, cousin Bruce happened to be in town — with his matching blood type. The infusion led to Jennifer becoming a humongous green mass of muscle, though she would ultimately be able to keep her senses, unlike the moronic, angry Hulk. The lesson I take from this story is never trust your cousins.

Don’t you hate when you pour orange juice on your cereal, put salt in your coffee, or chug a bottle of “super-plastic fluid” instead of Coke when you’re parched? That last goof is exactly the origin of Bouncing Boy, a bizarre Silver Age character who could turn himself into a human bouncing ball. Chris Sims discussed Bouncing Boy and some other bizarre origins here. Please, DC, put Bouncing Boy in the Justice League movie.

For some, gaining your own superpowers may be too much of a chore, but don’t let that stop you: Superhero science also allows you to shove your mind inside the noggin of your favorite hero. That’s exactly what Dr. Octopus did a couple of years ago. Many years after his own science accident fused his metal arms to his body, Doc Ock was imprisoned, sick and dying. But his octobots still roamed the city, and he managed to fulfill a long-term plan by switching minds with Spider-Man, which led to the (of course) temporary death of Peter Parker’s mind and Dr. Octopus’ run as the Superior Spider-Man.

There’s a rich tradition in comics of making up substances to explain why something is supernaturally powerful. Why can’t Wolverine’s bones be broken? They’re laced with adamantium. What makes Captain America’s shield so bouncy yet strong? Vibranium. What makes Thor’s hammer so good for smiting and holding enchantments? Uru. But the ultimate comic book science substance has to be Pym Particles. Named for their inventor, Henry Pym, Pym Particles allowed him to shrink and become Ant-Man. They later allowed him to grow and become Giant Man. As hilariously explained by the Watcher in “FF” (a much-missed series by Matt Fraction and Michael Allred) Pym Particles operate along three axes: size, strength and durability. In other words, Pym Particles are the Holy Grail of comic book technobabble.