"Captivated" director: Pamela Smart is not the demonic ice princess that the media created

Jeremiah Zagar explains the many sides of Smart, in prison for life, that the public doesn't understand 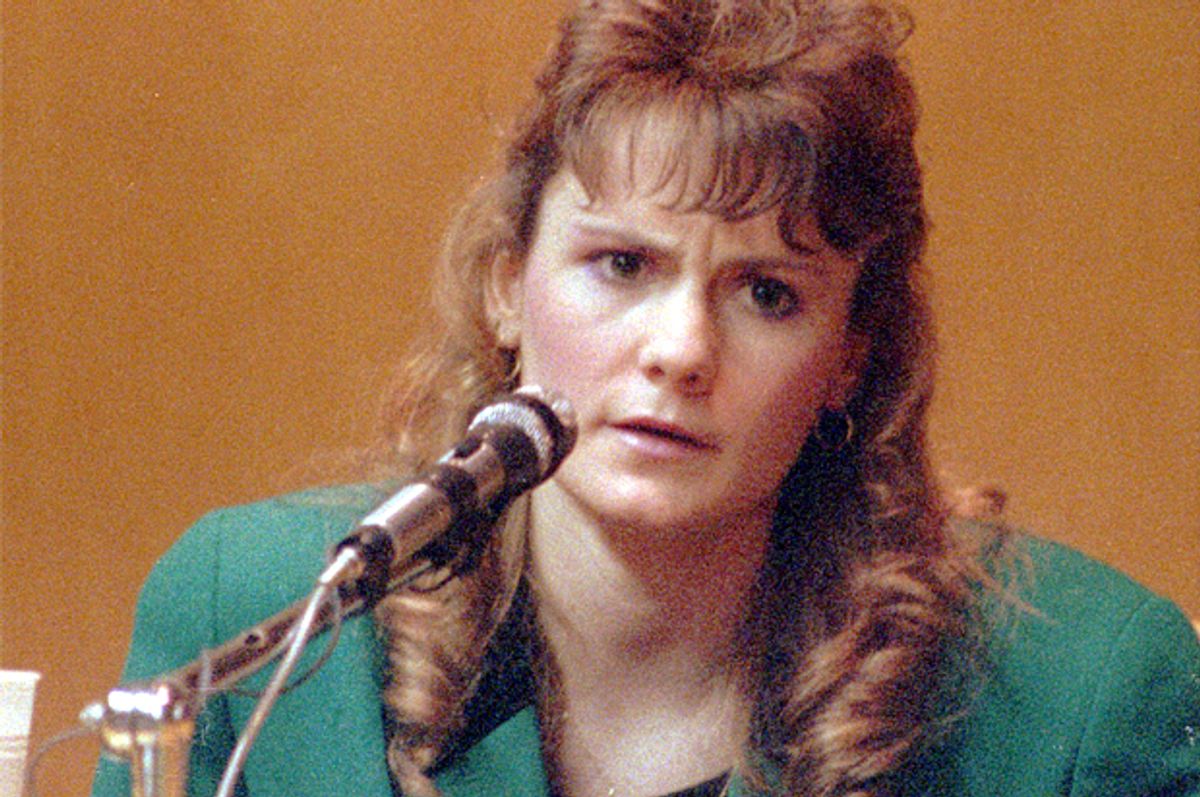 Pamela Smart is best known today as the inspiration for Joyce Maynard’s novel “To Die For,” the pitch-black comedy about a seductive woman who convinces young men to kill her husband. According to a new documentary, “Captivated,” which airs on HBO on Aug. 18, there’s something very wrong with that.

In 1991, the real-life Smart was convicted of conspiracy to commit murder (among other charges) after her 15-year-old lover, Billy Flynn, killed her husband. The media depicted Smart as evil and manipulative and Flynn as her hypnotized pawn; little wonder that the jury, which wasn’t sequestered and was able to consume media coverage, sentenced Smart, who remains in prison to this day without the possibility of parole as Flynn has been moved into work-release.

Jeremiah Zagar, the director of “Captivated,” told Salon that he hadn’t been interested in crime stories before getting hired to make the film -- and that he sees the story as about more than guilt or innocence. “I’m interested in the trial as a narrative device, as a way of telling a story,” he said. “And the story that was most convincing was that she was a Lady Macbeth.”

As for whether this movie can help make an impact on Smart -- could she, eventually, be freed? -- Zagar takes a measured view. “On a baseline level, I hope the film shows she got an unfair trial and gives her the chance to tell her version of the story.”

How did you end up making this movie?

I didn’t know anything about her or the case and I’m not a true crime fan -- that doesn’t interest me at all. But I had just finished my first film, “In a Dream” [about Zagar’s father, a muralist]. It was on HBO and shortlisted for an Academy Award, so I was asked to cut a trailer for this film, and got to look at all the archival footage. Lori [Cheatle], the producer, saw my film and asked me to direct the film after cutting the fundraising trailer. By that time, I was completely immersed in the archival, and when I met Pam, I saw a woman who was incredibly different from how she was portrayed in the media. She was funny, smart, effervescent. I wanted to make a film about a woman people think they know and don’t. When the camera is on her, she becomes that wooden creature.

Was her discomfort with the camera something you had to get past?

In the interview she is wooden, rehearsed. And because she has been raked over the coals, that is how she responds to the camera. All you get is people telling you what she’s like. There’s a very brief moment when she’s herself, in that writing workshop we show. And that’s what Pam Smart is like all the time. But what she becomes when the camera’s put on her … it’s a flaw of the film but a flaw we had to get around. It’s nearly impossible to film her in prison in the first place.

You'd have to talk to Lori -- she went through the rigmarole of getting the interview. But once you go into the prison ... Prison is a crazy place. It’s like going to the airport, you take everything out of your pockets. Then they search you, and you go through eight different doors and each one locks behind you. You really feel trapped. And while you wait for her, she’s getting strip-searched. So she's automatically in an uncomfortable position, even before you talk to her. And you sit in a room with the media director of the prison who listens to the conversation. It’s an innately uncomfortable place. But we were able to build trust with telephone calls.

What do you make of Joyce Maynard? The film depicts her speaking fairly blithely about Smart, whose story she adapted into “To Die For.” It made me uncomfortable.

That’s the ultimate conundrum of the artist. Joyce is a wonderful writer and artist. And her dedication needs to be to her work and not to the characters on which that work is based. The character she created is very, very different from Pamela Smart. It’s what makes that character great and what makes that book a good book, because Joyce is dealing with it on a personal level. We as artists need to think about the ramifications for the people on whom we base our work. But it’s seen as less of a problem in the fiction world. When people make fiction they think it isn’t bound by reality. When we make documentaries, we feel we need to represent an essence of truth or else our documentary is innately flawed. And we think about the effect our film will have on the subjects. That is a question that’s important to ask. And it's one people have been asking forever, and in many ways it’s one of the central questions of the film. It’s one of the reasons I wanted to make this film, because of those Janet Malcolm books, like “Iphigenia in Forest Hills,” that ask -- how are we implicated?

So how do you think this film will affect Smart’s life?

Pam Smart is a person who has been affected adversely two ways. One is that she got a really unfair trial and that unfair trial has caused her to have an incredibly disproportionate sentence that has put her in prison for the rest of her life. The other thing that happened was that her story was stolen from her. We all have a narrative of who we are. When that narrative is transformed, it makes us angry. At the end of “The Crucible,” John Proctor is screaming “My name, I have no other!” And [Smart] feels that way. On a baseline level, I hope the film shows she got an unfair trial and gives her the chance to tell her version of the story, and that it’s fair and that it highlights the other side of the story as well. And that it shows there are no easy answers -- there are just a series of different questions.

From the very beginning, we knew the movie wasn’t going to relitigate the trial or deal with questions about guilt or innocence. We’re all a little guilty and we’re all a little bit innocent. The case was a he-said, she-said case. Pamela Smart said something to this young man and he felt that thing was a direct indictment to kill her husband. She didn’t feel that way. He told his friends, they made a plan, and they killed him. There’s no way except to put us in that room during their most intimate moments to know. But what did become incredibly clear was that the trial was incredibly flawed. A juror says in the film that the system did what the system does; I find that very sad. One thing the film tries to communicate is regret. You should feel at the end of the film that something went wrong, and question why something went wrong.

I found it really interesting that the movie didn’t relitigate the trial at all -- you must have some feelings about guilt or innocence.

I’m interested in the trial as a narrative device, as a way of telling a story. And the story that was most convincing was that she was a Lady Macbeth. She was the Eve to his poor innocent Adam. That was a trope that was part of our narrative history -- that evil woman who seduces the young innocent man. That’s not the reality of the case! The reality was something more gray. Those tropes are simplistic creations that tell us something about our lives so we can keep living in the way we want to live. We feel good when we can say that person fits into a narrative and that defines her guilt.

Do you think that the treatment of Smart has been misogynistic?

If she were a man, it’d be a different archetype. The 21-year-old man and the 16-year-old girl is Elvis Presley!

Has making this film made you more aware of cases today? I know you don’t follow crime stuff, but a lot of the media coverage in the film reminded me of Nancy Grace’s coverage of Casey Anthony, whose acquittal made a lot of people angry.

One of the most important and neglected areas of literacy is media literacy. Nobody knows or thinks about how images and editorial choices affect them. As a storyteller, I’m aware of it in the stories I tell, but because this is a story about how other people tell stories, I’ve become much more aware. It’s in every trial you see on CNN, in every news bite you see on any local news station.

The only thing that’s changed is that the media’s more saturated with stories. At the time, you could focus solely on one story because there were so few media outlets and they were so naive about how they should focus on those stories. Now there's a myriad of things to focus on. Often in these sensationalized cases, juries are sequestered. But it’s impossible to know what the Smart jury saw.

Do you think there’s any chance the current or future New Hampshire governor will intervene to free Smart? Is that something anyone’s hoping for?

The public opinion may change. The men got out but the taxpayers of New Hampshire continue to pay for Pamela Smart to be in prison … it’s ridiculous. By turning her into a realistic, nuanced person and changing the narrative, people can see she’s not the demon that was created, she’s not the ice princess, she’s something else. She’s someone else, who’s not a danger to society. And for her sake, I hope that happens.