Dating while losing my hearing

At 24, I went from an uninhibited yogini to a statistic. As the sound of the world faded, I had to listen to myself 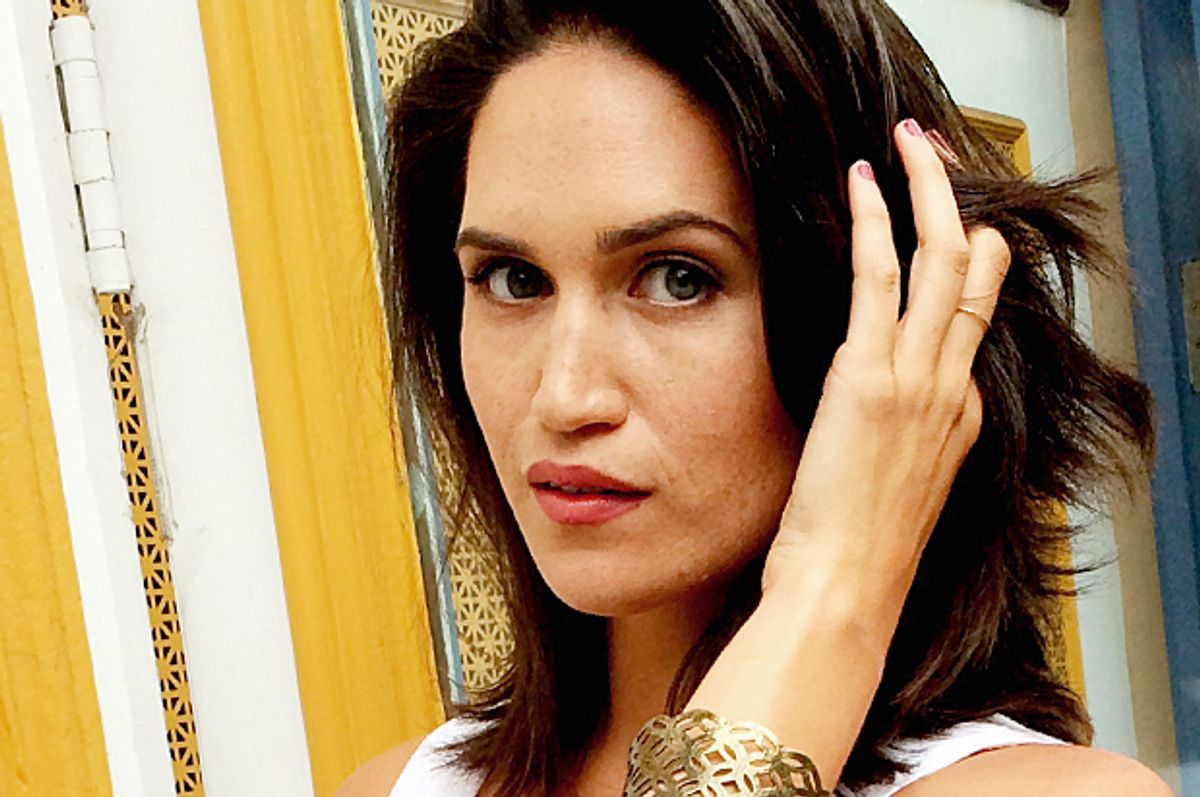 His arms and legs were tangled in mine, our first night together. From above we resembled a lover’s yoga pose. I felt free and bold and wildly unguarded, until his rough voice scratched against my ear. My confidence deflated, and my body tensed. It wasn’t what he’d said that murdered my mood but that I couldn’t hear it. He’d whispered it into my left ear, my deaf ear.

He took my silence as lack of interest, and I didn’t correct him. Confessions of maladies should be a clothed conversation, something I’d divulge eventually … when I had to.

Standing at 5-foot-8, I appeared willowy and well dressed; he probably noticed my Irish eyes first and then studied their contrast to my bronze Colombian skin. This man, with everyone else, assumed that I was a healthy young woman. And why wouldn’t he? There was no wheelchair, no trained animal by my side. My injury was invisible.

But at 24, I had gone from a feisty, uninhibited, outspoken yogini to a statistic. The transition took minutes. I’d been sitting in my midtown office when it started, typing another day away in my job as an assistant (read: glorified coffee fetcher). A harsh ringing pierced my ears so suddenly that I flinched and contemplated diving under my desk. A co-worker walked by slowly, assessing my hunched position.

“What is that?” I asked her, unsure if I should be moving toward the nearest exit.

The screeching, only audible to me, went on for 30 seconds before panic paraded in. I told myself not to overreact (a trait I get from my mother, who believes every headache is a brain tumor, every sneeze a pneumonia). But as the ringing filled my head, I knew something wasn’t right. Without a word I stood and rushed out of the office and into a cab. We raced to the emergency room.

Three days later, I was propped up against pillows, connected to an IV. If I tilted even slightly, the room spun, dizzying lights forced my eyes to stay squeezed shut. A doctor sat on the edge of my bed and compared hearing to the propellers of a plane. If one propeller went out, the plane lost its balance and would begin to spin out of control. By the end of his crash course in vertigo, I was seeing double.

Three different nurses in three different washed-out cartoon scrubs came to my room to prick me, demanding vials of blood. My skull was scanned and screened from every angle. A hearing test was scheduled last. I was seated in a small, padded room, a set of headphones covering both ears.

“Repeat after me,” said a toothy brunette from behind tinted glass. “We’ll start with your right ear. Pencil,” she said slowly.

I sat up straight. “Pencil,” I repeated proudly.

I echoed each word, reassured that my right ear was still alive.

“Now I will use the left headphone,” she warned.

I took a deep breath and listened, but could only hear the shrill buzzing like an obnoxious fly. She waited for a response.

When the doctor came in that night, his smile was misleading. “Well, it seems you didn’t suffer blunt trauma, there’s no trace of a virus or a budding tumor. That’s the good news.” He shrugged and then admitted he had no idea what the cause was, but he was certain it was irreversible.

“How could that be?” I begged for more information.

“It’s an anomaly, just one of those things,” he said rubbing his hands together. I stared at the TV behind him, the sound muted. He handed me a prescription for Ginkgo Biloba. “It sometimes helps with tinnitus, which is what we call that god-awful ringing you can’t get rid of,” he said.

My diagnosis was more of a description: sudden hearing loss.

That day, I unwillingly joined the deaf and hard-of-hearing population. Most were either born that way or slowly lost their ability to hear around the time they hit retirement age. Newly out of graduate school, I was a minority.

I was stuck in bed with severe nausea and vertigo, obsessively Googling my new ailment. The doctor suggested we wait and see if my hearing came back on its own, treating my trauma like it was a bored housecat that might wander back any day now. I waited for weeks and months and seasons and nothing happened.

New York City, the vibrant place I’d once fallen madly for, became a nightmare. The streets were humming, whirring. Tractors moaned, ambulances screamed, the click of lighters and the hiss of brooms brushing cafe floors were torture. I heard everything on one side and nothing on the other; it drove me mad never knowing where each sound came from. The idea of riding my bike along traffic-heavy streets brought on panic attacks. I stopped leaving home, choosing to order in for food and call out of work. Headstands and tree pose were impossible. It would be months before my body regained some balance. Frustrated, I quit my practice entirely.

Eventually I had to return to work, and when I did, I kept my eyes down, quietly taking notes in meetings, hoping no one would speak to me. The weekends came and then went; my phone remained off. I dreaded the invitations waiting on my voicemail. Let’s go to a club. My boyfriend’s band is playing. Meet us at that new sushi place in Tribeca. No, no and no. I was beginning to hate the wholly hearing. I pictured myself absently nodding my head and smiling, my ears pounding from the high-pitched humming caused by throbbing bass and clattering plates. Someone would call my name from across the room, and I would look in the wrong direction, mortified, turning in circles like a toddler lost in a grocery store, waiting for someone to claim them. Dating was bleak; men would repeat their clever lines only once or twice before mumbling never mind and moving onto the next woman. Deaf was not sexy, deaf was mortifying.

I chose to stay quietly alone; being someone else’s problem was not an option. Knights on white horses are only appealing to someone who can be saved. Though I’d only lost half of my hearing, I was losing all confidence. Why had no one written a Deafness for Dummies? Wasn’t there a support group that met in a basement, offering up hope and stale cookies? There was, and I was shunned. I still had half of what they’d lost entirely. I seemed ungrateful. I knew that it could have been worse. Their stories reminded me of that. I had to bounce back from this, because what other choice was there? I expected I’d struggle to relearn my role in this world, with a now damaged set of tools, but I never realized just how much.

Alone in my bedroom each night, I studied sign language, fearing I’d wake up one morning with the world mysteriously mute. I took comfort in my one fully functioning ear. I washed thoroughly behind it and carefully cleaned it with a Q-tip. But how could I know that my body wouldn’t betray me again, that the other side wouldn’t abandon me one day without warning, like a callous one night stand, no note, no explanation.

I pretended as long as I could. Tilting my head toward the person speaking, studying the movement of their lips, I’d do anything to avoid admitting my condition. And I rarely had to; I’d learned to hide it well. After a sixth invitation from an old friend, I finally agreed to have a drink. I walked into the cafe, recognizing him and waving hello to the group that stood by.

“Guys, this is Jess, she’s deaf on this side so speak to her on this one.” He gestured to everyone, ignoring my frozen stare. My name and deaf were in the same sentence!

I thought I would melt into a puddle of shame, there and then in the middle of happy hour. But I didn’t. And people spoke on my good side. And I could hear them. It was shocking how he’d said it so casually, so matter-of-fact. No one even seemed to care, but because I had cared so much, I’d been missing out.

I could say that from that night on I didn’t struggle ever again and things went back to normal, but that’d be a lie. Things never went back to normal. And before I reached any revelations, I was angry. I often hated everyone who could listen to music with two ear buds. I resented my body, no longer trusting that if I took care of it, it would take care of me. Every day I was ashamed to say the words I’d inevitably have to say: Excuse me? Can you speak up? And then finally, defeated, I’d mumble an apology, “Sorry, I’m deaf on this side.”

The most common response was intrigue; rarely did I receive pity. People wanted to know how it happened, so I’d start from the beginning. Each time I retold it, my shame began to fade. I was no longer apologetic, why should I be? Months passed and then years, my diagnosis became a small, often forgettable detail and not my whole story. Those words became part of my introduction.

I am now 28 and though not a day has passed that I’ve forgotten about my disability (a word I only recently began using), I’ve accepted that it happened, and that I will always be known as someone’s half-deaf friend Jess.

That afternoon changed the way I approach life, but it didn’t change me. Now I arrive early to dinner parties to grab a seat at the end of the table that exposes my good side to the greatest number of diners or I scout out the people I prefer to ignore. I scoured the Web for a mono set of headphones, finally able to enjoy a song in its entirety rather than having to choose between the vocals or instrumentals. Bars or crowded restaurants still make conversations tricky; instead I opt for quiet cafes or hosting at home. To everyone’s frustration, I often speak too quietly, worrying that I’m embarrassingly yelling.

Because one ear is strained from doing the work of two, I will completely lose my ability to hear. It will happen sooner rather than later and knowing that is terrifying. It unravels me to think that I might not be able to hear the words I love you from a man I haven’t yet met. When I consider that there will be a time when I don’t remember how a whisper feels, or the sound of my own voice, I can feel the fear and pity start to churn inside.

So instead I force myself to listen to what I can hear. The clicking of my fingers tapping keys, the footsteps pounding the wooden floors above me, the cooing of pigeons perched outside of my living room window, the voices from the kitchen, of people in my life that wouldn’t let me stay hidden.  That is what I hear right now and because I can, I’m choosing to listen.