I asked my husband to take away my credit card

I've always believed in financial independence in marriage. But as my spending spun out of control, so did my life 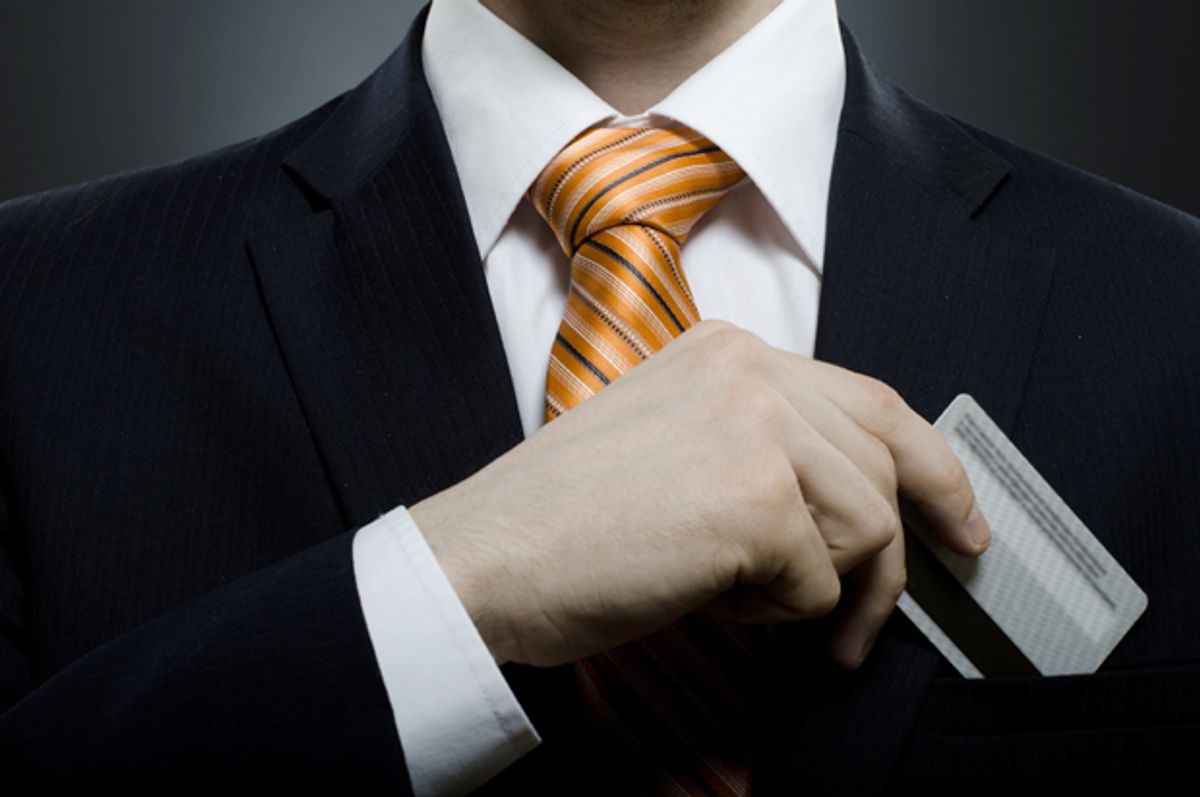 The other day I told my husband, "I want you to take my credit card," and then grimaced with a sudden pang of self-awareness. He looked at me like I'd just sprouted a second head in the likeness of Phyllis Schlafly. There I was, an avowed feminist, suggesting that my husband should manage my finances for me.

Over the last year I had amassed a manageable and yet unreasonable amount of credit card debt. It was a result of retail therapy in the wake of my mom's devastating death, absurd wedding indulgences and anticipation of freelance checks arriving any day now. This debt bought me a messy drawer of wedding makeup that I never wear, some shoes that proved too uncomfortable, necklaces I incorrectly deemed myself bold enough to wear, and three pairs of eyeglasses that pretty much look exactly the same. Oh, and a time machine straight to the '50s, apparently.

This request for my husband to take my credit card went against everything I stood for. I had always admired my parents, who maintained separate bank accounts and a high degree of financial autonomy. In fact, my mom was the one who obsessively listened to Bob Brinker's "Moneytalk" and made stock market investments. She wasn't afraid of money; she trusted herself more than anyone else with it. I also grew up hearing cautionary tales from her about my grandmother who "made a deal with the devil" by handing over financial responsibility, both in earning and management, to my grandfather. It limited her choices, power and happiness. In that story was a warning about the perils of following traditional gender roles.

The kind of woman I wanted to be took financial responsibility for herself. I knew this. I had known it for as long as I could remember. But faced with my own financial irresponsibility, my thought was: Just give the credit card to your husband; he's good with money. Just nine months into my young marriage I had easily shrugged off my aversion to anything even resembling stereotypical gender roles. Take my credit card! Save me from myself! Discipline me! I was asking for paternalism. I was giving in to the dangerous allure of surrendering responsibility.

The moment the words left my mouth, I knew. It was a slip of the tongue, a truth murmured in the middle of sleep. It seemed to threaten everything I believed in (men and women's equality, for starters) and reinforce much that I didn't believe in (unflattering stereotypes of women as impulsive, out-of-control, childish, bad with numbers and, of course, obsessed with shopping). This looked and felt like a feeble-minded woman's bargain with a "Mad Men"-era patriarch. None of the other ways that we contradicted gender norms could erase this seemingly glaring contradiction between practice and belief.

Of course, the truth was that I wanted him to take it not because he was a man but because I didn't trust myself anymore. I wanted someone -- of any gender! -- to deal with it for me, to act as enforcer. Someone to budget and dole out a weekly allowance. Someone to say no to even my most creative and impassioned spending justifications. I explained this to him in my defense -- it just happened that he was a man and I was a woman! It just happened that he was good with money and I was bad with it! It only looked like sexism. I started to believe it, even. For a couple of days I considered actually doing it, giving him that over-swiped card and saying, "I'm only allowed in emergencies."

But it's also true that women, even today, are taught that money and math are not their domain. I'm not so sure that I can blame my spender ways on sexism or socialization, but it's easy to recognize the ways women's financial responsibility and confidence has been undermined. Take, just for one example, an article I stumbled across at Forbes, which reported on a recent survey of women by Prudential: "Women feel no more prepared to make wise financial decisions today than they did two years ago — or even a decade ago."

What would handing over financial decision-making teach our daughter, if we have one some day? Maybe it doesn't matter. After all, I grew up with the strongest female role model when it came to finance and personal responsibility, and yet here I am today paying off a debt and contemplating putting my husband in charge. Not even a good example growing up could save me from that -- but it just might be what's kept me from handing over that rectangular piece of plastic. It currently sits unused in the back of my wallet, and I have only myself to thank for that.