"I was going to gay bars, having affairs": George Takei on the torments of life in the closet

The actor, who plays himself in a new documentary, on the coming-out process, "Star Trek" and feuding with Shatner 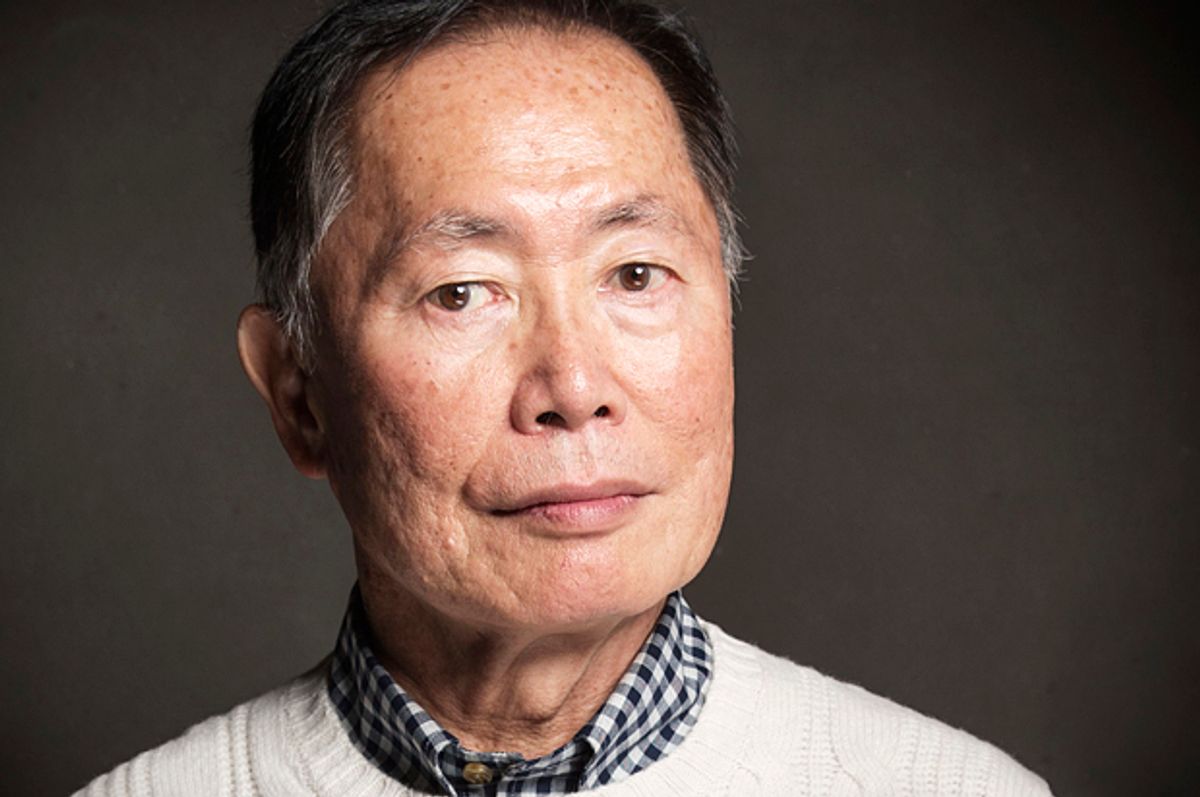 Who’d have thought Mr. Sulu would be the member of the “Star Trek” cast who’d be with us the longest?

Start looking for actor George Takei in the culture and you’ll see him everywhere -- a pop culture staple by virtue of his inexhaustibility. He’s on Twitter, where he’s amassed over a million followers; on TV and radio talk shows, where he’s game for practically anything; online, where a video he made mocking the homophobia of basketball star Tim Hardaway went viral; and now on movie screens. A documentary, “To Be Takei,” opens in select cities and on VOD and iTunes Aug. 22.

The film is a low-key depiction of Takei’s domestic life with husband Brad Altman, as well as his fairly packed schedule -- between “Star Trek” conventions and press interviews, Takei, who began his career on the stage, is at this point more than just an actor. He’s at once a symbol of pop culture’s love of nostalgia and its relentless desire for novelty. We spoke to Takei as he promoted the documentary.

You’re someone with strong opinions about political issues -- everything from marriage equality to honoring Japanese-Americans interned during World War II. But you also can go on “Watch What Happens Live” or “Howard Stern” and be, frankly, goofy. Do you feel conflicted that to get attention for your causes, you have to be so outlandish?

Some of the social issues are, to use your word, goofy. It’s silly. The best way to treat silliness is to laugh at that silliness. When Tim Hardaway, the basketball player, came out bald-faced and said, “I’m homophobic, I hate gay people," that was so outrageous that the only thing you could do was make a mockery of him. Because, I mean, I as a gay man, I like athletes, sweaty athletes, particularly because he’s bald-headed and black. His head is chocolately, smooth, sweaty. And those calf muscles. And that’s the natural reaction of gay people to someone with that kind of physique … When you least expect it, I will have sex with you! And I burst out and guffaw. [When I made the video], that was shared by everybody! And Tim Hardaway’s become an ally.

You were in the closet -- perhaps a glass closet -- for most of your career, simply because being an openly gay actor would have been impossible. Was the trade-off worth it?

When I was young, I was just passionately, head-over-heels in love with theater acting. That was my passion, and I knew I could not get hired if I were gay. There were gay producers, writers and directors in Hollywood, but they weren’t out, because they wanted their careers. So I couldn’t be out. And yet at the same time I was an activist -- supporting political candidates and various other issues, like the civil rights movement, the Vietnam War, an apology for unconstitutional incarceration -- and the most organic thing to me, the closest thing to me, I was silent about. Which causes a sense of betraying myself by not addressing that.

That benchmark year, 1969, when Stonewall happened, was an inspiring thing. Every gay bar across the nation knew about it. I was inspired by that. But 1969 was also the year that “Star Trek” got canceled. I’ve got to get cast in another series. The timing of those two things ... The reason why I wanted the career even more was that, well, as a teenager everyone wants to be an actor. But I was lucky. I was getting one gig after another. I was a theater student at UCLA in a student production that a casting director for Warner Bros. saw, and was plucked out of that for my first feature film [“Ice Palace”] starring Richard Burton and Robert Ryan. A week on location in Alaska, two months back at the studio. And Warner Bros. liked what I did and they had a whole slew of TV series, so they’d plunk me into TV series. So I was working!

You were a well-known, recognizable actor during and after “Star Trek.” Did you go to gay bars -- was that even possible for you?

I was going to gay bars. That adds to the stress, too. I was having affairs, and that adds to the stress. When I was a teenager, there was a Greek god of a movie star, Tab Hunter. Gorgeous, blond. But then one of the scandal sheets exposed him as gay and he stopped working. He disappeared. He had been in almost every other movie as a leading man. So that taught me a lesson. But still you have your juices inside you. But I’d think … that guy could betray me. Somebody who sees me at a gay bar could talk. So you’re always … you have your guard up. There’s that fear of exposure. So you’re living with that kind of tension all the time. If there’s a party where the press is going to be, you take a female friend -- a beard.

Did your female friends know the purpose they were serving?

I did not let them know. They were friends! And I’d say, “I’m going to a fun party, would you like to come? You get to dress up.” And they were friends and we’d have fun! Then later in the night, I’m at a gay bar! [laughs]

But there was all that hypocrisy there. And I was completely aware of that.

Is your past hypocrisy, as you call it, part of why you’re so outspoken now?

Exactly. Because I paid such a high price when I was young, virile, crazy and daring. If someone had wanted to destroy me, they could have. And I was opening myself up to that.

Other people have their fears. They may be working as a schoolteacher or an insurance salesman. If they expose me, they’re exposing themselves as well. It’s that social climate that kept people from coming forward … Although there were people that got exposed, if maybe a little money was exchanged.

On another note, I was interested in the film’s depiction of your relationship, or lack thereof, with your “Star Trek” costar William Shatner, who sits for an interview with the crew.

That always comes up.

Does it bother you that it comes up? It has been years since you were on-screen together, and yet you both seem to have a lot to say, still.

The last film we did together was in 1991. And we still do “Star Trek” conventions. And we cross paths. Every one of the cast members, and especially Leonard [Nimoy], has had run-ins with Bill. Leonard especially, because they were the two in competition. Jimmy Doohan, who played Scotty, was the most outspoken one at “Star Trek” conventions. He used to rail on about Bill’s stealing scenes, or stealing lines, or stealing close-ups. And I was -- everybody else, Nichelle [Nichols] and Walter [Koenig], in their autobiographies, talk about Bill being very difficult to work with.

In the documentary, you’re responding to questions about Shatner. Had it been your choice, would you have touched on the subject at all?

Well, you know, one of the gifts from “Star Trek” is that my professional, work colleagues have become lifelong friends. When Brad and I got married, we asked Walter to be our best man and I asked Nichelle to be our matron of honor. She said, “I am not a matron! If Walter can be the best man, why can’t I be best lady?” And we said, “You’re absolutely right.”

So, because we had them, we didn’t want to be exclusive. We sent invitations to everyone, including Bill. If Bill wanted to come -- well, there could have been a mixup in the mail. But we sent the invitations to everybody; before the wedding, we were interviewed by the AP and told them we’d invited everyone. And everyone had RSVP’d except Bill. I said we weren’t surprised, because he’s never been part of anything we did socially. We weren’t surprised.

We were surprised when two months after the wedding, he went on YouTube to rant and rave about it. If you wanted to come that badly, call us before the wedding! And now he’s claiming he doesn’t know me -- so why did he want to go to the wedding so badly that he’d complain about it on YouTube? Over the years, we’ve become a “Star Trek” family. We have dinner at each other's houses, or together when we’re at “Star Trek” conventions out of town. We’re a family. And I use that as a metaphor -- most families have that eccentric, crazy uncle who shows up at Thanksgiving dinner or family reunions. And Bill is that eccentric, crazy uncle, and he’s there with us.