"They don't wear ski masks, they don't wield knives, so they don't see themselves as rapists," one researcher notes 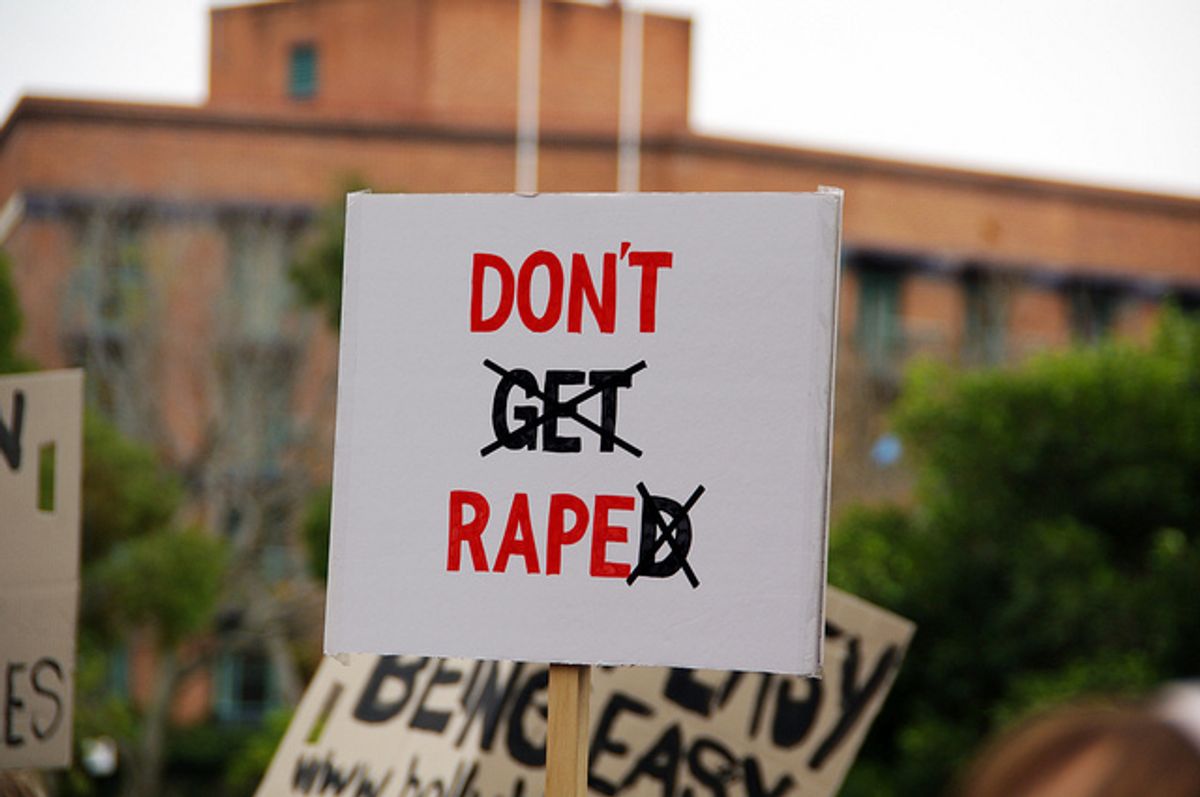 One of the greatest misconceptions Americans have about rape is that it's often a crime committed by a perpetrator unknown to the victim. The stranger rape scenario -- being stalked in a dark parking lot, a man wielding a knife forcing his way into a woman's apartment -- is real, but it's far from the norm. According to national statistics, around 70 percent of rapes were committed by a person the victim knew in some way. When it comes to sexual assault on college campuses,  "85 to 90 percent of sexual assaults reported by college women are perpetrated by someone known to the victim," according to the National Institute of Justice.

When the dominant cultural narrative about rape is one of stranger danger, victims can feel reluctant to report crimes that don't fit this narrow story line. Mostly because they're scared they won't be believed. (This is, of course, a well-founded fear.) But the other consequence of this myth is that perpetrators, including college students who commit sexual assault, don't generally see their actions as rape because they don't see themselves as the "classic rapist."

"Most of these men have an image or a myth about rape, that it's some guy in a ski mask wielding a knife," David Lisak, the psychologist behind a 2002 study on "undetected rapists," told NPR News. "They don't wear ski masks, they don't wield knives, so they don't see themselves as rapists."

Lisak surveyed around 1,800 men about their sexual histories. As Laura Starecheski at NPR notes, Lisak's survey included questions like, "Have you ever had sex with an adult when they didn't want to because you used physical force?" Around 6 percent of the men he surveyed had raped women they knew, and two-thirds of those men had committed, on average, six rapes. "Together, the 120 men in Lisak's study were responsible for 439 rapes. None were ever reported," Starecheski points out.

One of Lisak's survey respondents detailed how he prepared for an assault. "We always had some kind of punch, you know, like our own home brew," he explained. "We'd make it with a real sweet juice, and just pour in all kinds of alcohol. It was really powerful stuff. The girls wouldn't know what hit them."

Lisak's findings support what anti-sexual violence advocates and survivors have long been arguing: Women's behavior isn't the problem, rapists are the problem. Alcohol is a weapon in these scenarios, not a social lubricant. “This idea that getting somebody intoxicated so you can have sex with them is an idea we just simply have to confront and erode," Lisak said.

Lisak's survey respondents also reported boasting to friends about the assaults they committed. And this is where the social environment and peer pressure comes in. When a rapist talks openly about assaulting women and his friends remain silent (or, all too often, congratulate him), this creates a social environment in which rape is normalized, even celebrated.

Rape culture is a term that gets thrown around a lot, and it can sometimes feel vague to the point of meaninglessness. But this -- the casual degradation of women and normalization of sexual violence among young men and their peers -- is certainly one of its faces.

But these are learned behaviors, which means they can change. This is what survivors and advocates mean when they say, "Teach men not to rape." And a handful of high schools across the country have taken that directive literally.

As Starecheski reports, a few high schools in Sioux City, Iowa, have implemented a program called Mentors in Violence Prevention, which matches older students with incoming freshman. The mentors then start conversations about dating, alcohol and sexual violence, and these conversations run throughout the school year:

Xavier Scarlett, a rising senior and captain of the football, basketball and track teams, says he tries to get inside the heads of the freshman guys he mentors. They talk through various scenarios. What does it mean to hook up with a drunk girl when you're sober? Would you be letting down your guy friends if you don't hook up in that situation?

And they spend a lot of time on that scenario Lisak heard about over and over in his U-Mass Boston study. You're at a big party. You see a guy you know with an extremely drunk girl, and he's trying to leave with her.

Xavier says he talks through all the options with the freshmen in his group. "Do I let them just leave? Or, do I grab him, or do I grab her? Or do I get some friends? If I say something, then will my friend judge me?"

What these students are doing is basic, but essential. They are teaching bystander intervention and affirmative consent. They are, in effect, teaching boys not to rape. There are a number of dedicated national organizations that do this work, like Men Can Stop Rape, and such programs have shown positive results in attitudes and actions of the boys and men who go through them. But their reach is limited because schools and communities aren't offering them. There are only a few dozen high schools around the country that offer the Mentors in Violence Prevention program, for example.

This needs to change if we want to meaningfully address the sexual assault crisis, advocates say. This kind of education should be as fundamental to young boys' education as math and science. Lisak's findings should also inform how we talk about sexual assault and alcohol. Contrary to most of what gets written about the issue, it's the men who use alcohol as a weapon -- not the women who drink -- who need to change their behavior. USA Today, et al., take note.