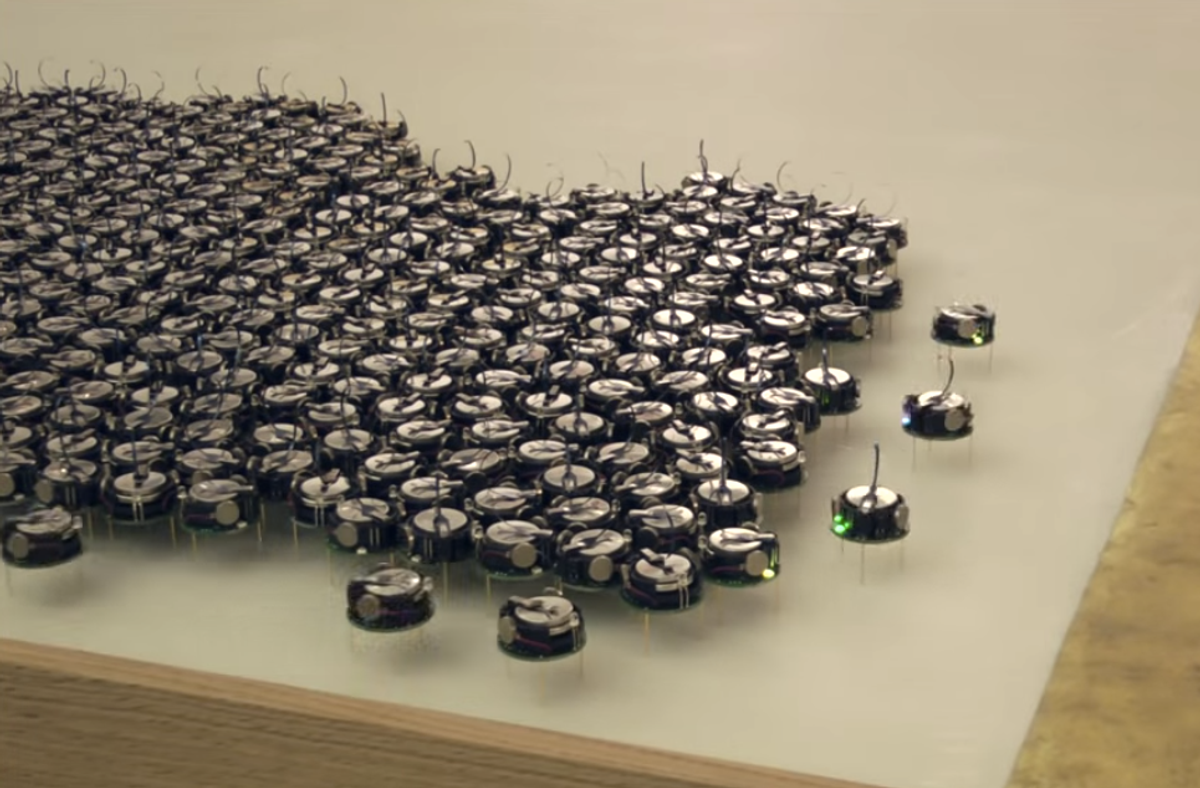 Computer scientists at Harvard University, led by Michael Rubinstein, created the largest swarm of tiny shape-shifting robots. These itty-bitty bots make up a colony of 1,024 self-organizing machines. Their purpose is to study collective behavior in nature -- like a colony of ants -- and serve as a precursor to transforming robots. Nature via Huffington Post explains:

"The puck-shaped robots, called Kilobots, cost roughly US$20 each and are programmed with a simple set of rules and an image of the shape to be formed. To begin with, the robots are arranged in a tightly packed, arbitrary shape on a flat surface. Then four 'seed robots' are placed in a cluster next to the swarm, and the robots on the far side of the pack begin to inch around the edge of the formation towards the seeds, propelled by motors that make them vibrate like ringing mobile phones.

The robots communicate using infrared light, but they are only able to transmit and receive information with the robots nearest to them — so they cannot 'see' the whole collective. However, the seed robots act as the point of origin for a coordinate system; information on their position propagates outward through the swarm like fire signals across the peaks of a mountain range. This allows each bot to determine where it is and whether it is inside the shape programmed by researchers. Over a period of about 12 hours, the programmed configuration — such as the letter 'K' or a star — takes form, robot by robot."

Eventually, professor Rubenstein explained the Kilobots' swarm behavior could help scientists create grain-of-sand-size robots that could morph into tools. These robots would be “like a three-dimensional printer, but instead of printing with plastic filament, you'd be printing with robots that can move themselves,” Rubenstein told Nature.

Though these small robots, which jitter back and forth on two legs, may be the precursor to Transformer-like robots, they still have some kinks to work out, including slow Kilobots. Watch the swarm in action: