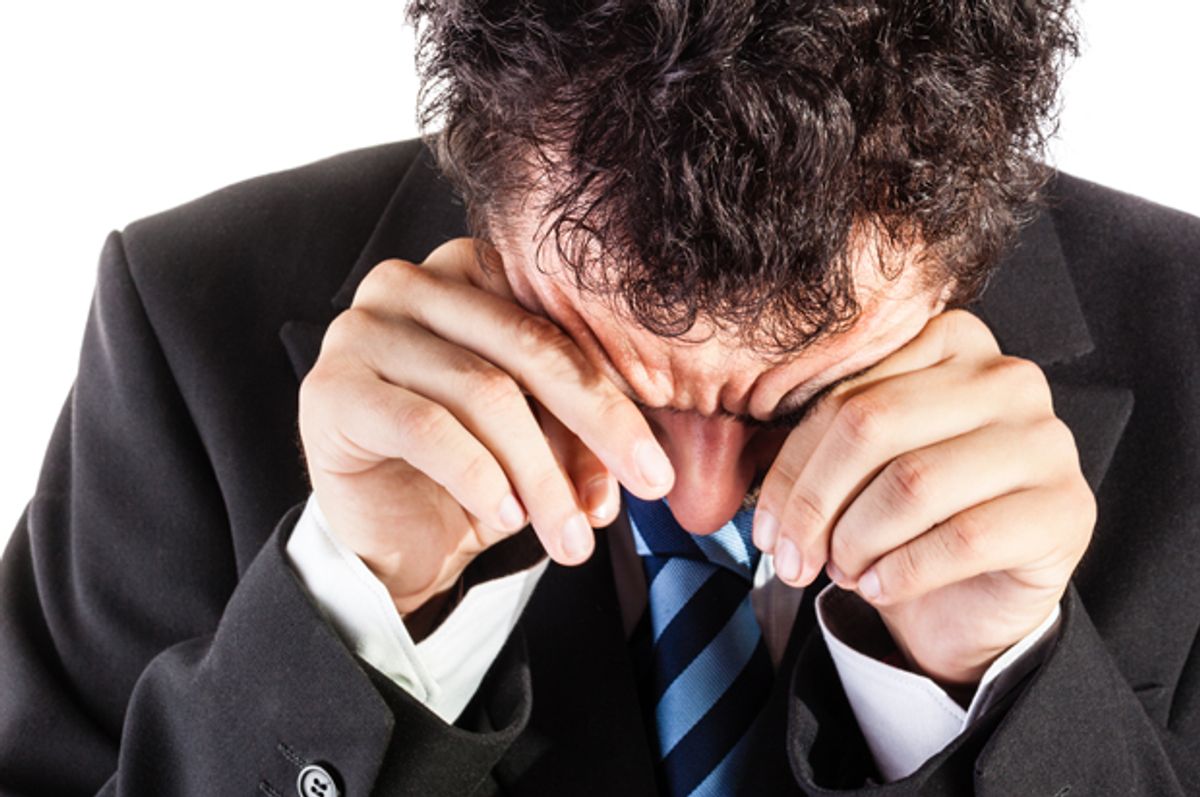 An addendum to the earlier claim that virginity pledges don't work: Virginity pledges mess with young men's heads. Consider how wrapped up masculinity is is with sexual conquests and objectifying women -- what happens when that's removed from the equation for appropriate gender roles, as it is for many young, evangelical Christian men who pledge sexual abstinence until marriage?

If you're thinking that these men could be more inclined to overcome dangerous social constructs, you're (sort of) right. According to new research presented at an annual meeting of the American Sociological Association, young men who take virginity pledges tend to foster healthy support communities to help them work through their sexual issues leading up to marriage. Sarah Diefendorf, a graduate sociology researcher at the University of Washington, found that for religious men who vowed to remain "pure," open dialogue about taboo behaviors (e.g., premarital sex) was all fine and good before the men were married. Diefendorf found the support communities to be healthy, productive and rare outside religious support networks.

After the wedding, however, the actions men considered "taboo behavior" actually took a turn for the worse, in terms of participants' mental health. Evangelical males had come to accept that discussing sexuality with anyone but their wives was unacceptable, yet had little to no understanding of how to approach such discussions with their partners. As a result, Diefendorf found, the men's sexual issues tended to go unaddressed.

"People think that evangelical support groups are just about suppressing men's natural urges, but really they are caring, supportive and safe space that allow men to have a remarkably open and frank discussion about sexual desire," Diefendorf said. "After marriage, the church culture assumes that couples become each other's support, regardless of the issue at hand ... There's little support in figuring out sexuality in married life, and these men don't know how to talk to their wives about it."

Additionally, Diefendorf discovered, men who took virginity pledges tended to continue thinking about sex in terms of maintaining control over desires, instead of considering it to be a normal, healthy part of life. As one of the men explained to Diefendorf, remaining abstinent before marriage requires an awareness of various types of temptations that necessarily disappear once a couple has wed. But other, post-marital temptations -- such as pornography and extramarital attraction -- take their place.

"Before you get married the biggest thing you struggle with, usually, is premarital sex," one of the men told Diefendorf. "But once you are married, you can't be tempted by that anymore, so you get attacked by completely different things ... Essentially Satan has to find a new angle to attack on."

At least one aspect of Diefendorf's findings is heartening; it's certainly a positive twist to see that young evangelical men have an outlet for discussing their sexual frustrations before getting married. The rest of the findings, however, are just sad. Several of the men in the study expressed a wish for the church and their pastors to talk more openly about sex, so they and their wives would have a road map for hammering out issues. Their desire indicates that keeping sexual problems "in the dark," "behind closed doors" or "under wraps" -- or whatever other euphemism seems appropriate -- causes confusion and heartache for those who are taught to shrug off their issues. The problematic ideas about sex and sexuality that many religious people have instilled at a young age don't just go away once vows are exchanged. It's difficult enough to undo years and years of believing that sex is dirty or impure as it is -- attempting to do so without support would seem impossible, which is precisely what Diefendorf found.

"While the whole point of these support groups is to honor sex in marriage, these men have gotten so used to thinking about sex as something negative that they bring those concerns with them to the marriage bed," Deifendorf said. "Once they're married, these men struggle to manage those concerns in the absence of the supportive community they once benefited from."