Three miles South of where Brown lay for four hours in the sweltering Missouri sun, another black man is dead 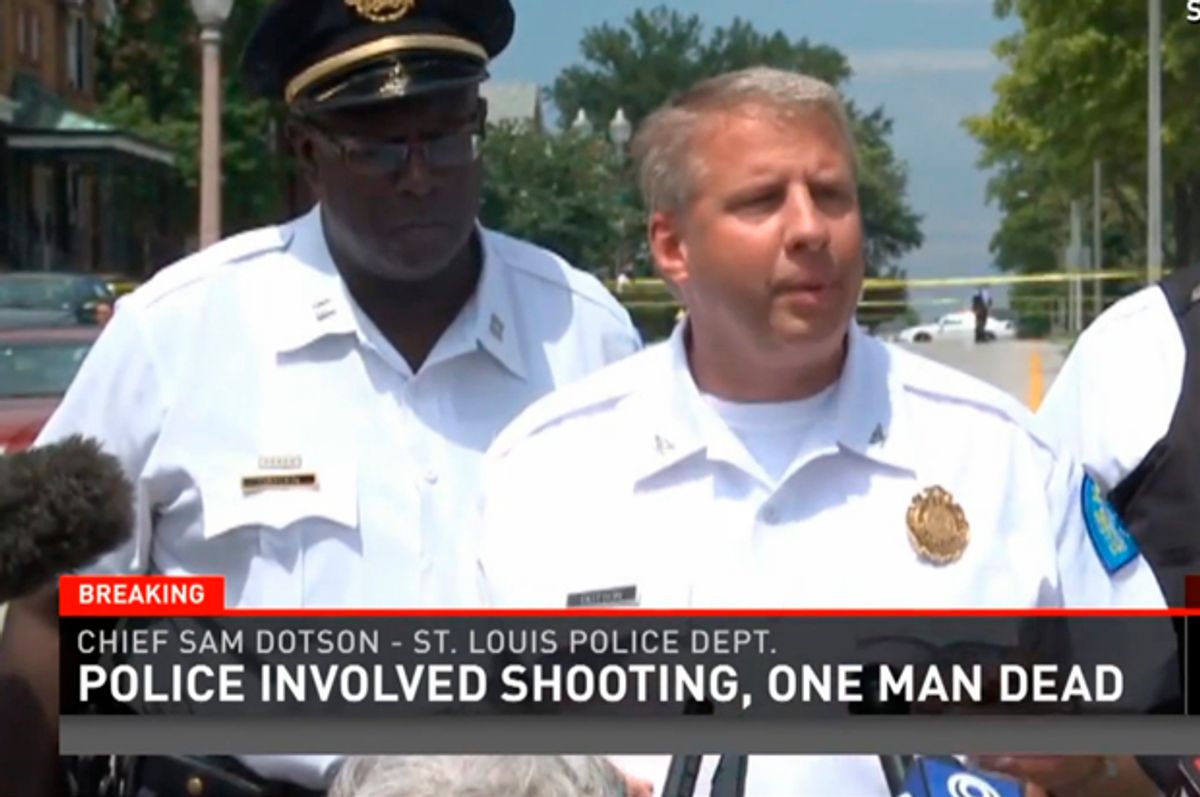 The suspect, who has yet to be identified, reportedly brandished a knife at the officers, and was pacing “erratically,” according to several witnesses and Chief Sam Dotson of the  St. Louis Metropolitan Police Department. Officers, who were responding to a call for a disturbance in the area of Riverview Boulevard and McLaran Avenue, say they arrived on the scene and found the suspect walked toward them clutching his waistband.

Mr. Dotson said the suspect, after yelling at his officers to "shoot me now, kill me now,” pulled out a knife, prompting officers to draw their weapons. Then, according to Mr. Dotson, the suspect approached the officer still sitting in the patrol car, ignoring calls to drop the knife. Once the man closed to three and four feet from the vehicle, both officers fire their weapons, striking him.

Authorities pronounced the suspect dead on the scene.

At a press conference, Mr. Dotson said the unidentified suspect entered a nearby convenience store and walked out carrying two energy drinks. He was confronted by the store owner who asked him to stop, but allowed him walk out the door. Minutes later, the suspect returned to the store, grabbed a package of pastries, walked back outside. According to Chief Dotson, the store owner asked the suspect to pay for the items but he refused, allegedly tossing the pastries into the street, prompting the store owner to dial the police.

According to MSNBC and a local news affiliate, KSDK, a large group gathered in the surrounding residential neighborhood where the officer-involved shooting occurred within an hour, chanting “Hands up, don’t shoot,” a mantra that has echoed throughout the St. Louis area as of late.

On August 9th, an unarmed black teenager—and recent high school graduate—Michael Brown, was gunned down by a white Ferguson police officer, Darren Wilson. A recent autopsy concluded that Wilson shot Brown at least six times, including twice in the head. Numerous witnesses said Brown had surrendered with his hands up when Officer Wilson approached Brown, gun-drawn, and killed the young, aspiring musician.

Since Brown’s death, many residents in Ferguson and in the surrounding area have taken to the streets demanding justice. Across the country, Brown’s death has galvanized supporters who have showed up to protest in his name.

In Ferguson, police, dressed in camouflage and gas masks, armed with sniper rifles, military-grade tanks, and tear gas have repeatedly clashed with crowds, arresting dozens, including 11 reporters, raising questions about police overreach and militarization as well as First Amendment concerns of assembly and of the press.

Many have also questioned the Ferguson police department’s handling of investigation into Brown’s death. Officer Wilson’s name wasn’t released until nearly a week after Brown’s death and local authorities still haven’t released the official autopsy, both of which have heightened tensions and fueled distrust among those seeking answers.

Three miles South of where Brown lay for four hours in the sweltering Missouri sun, details are still emerging about the officer-involved shooting that left another black man lying on the curb.