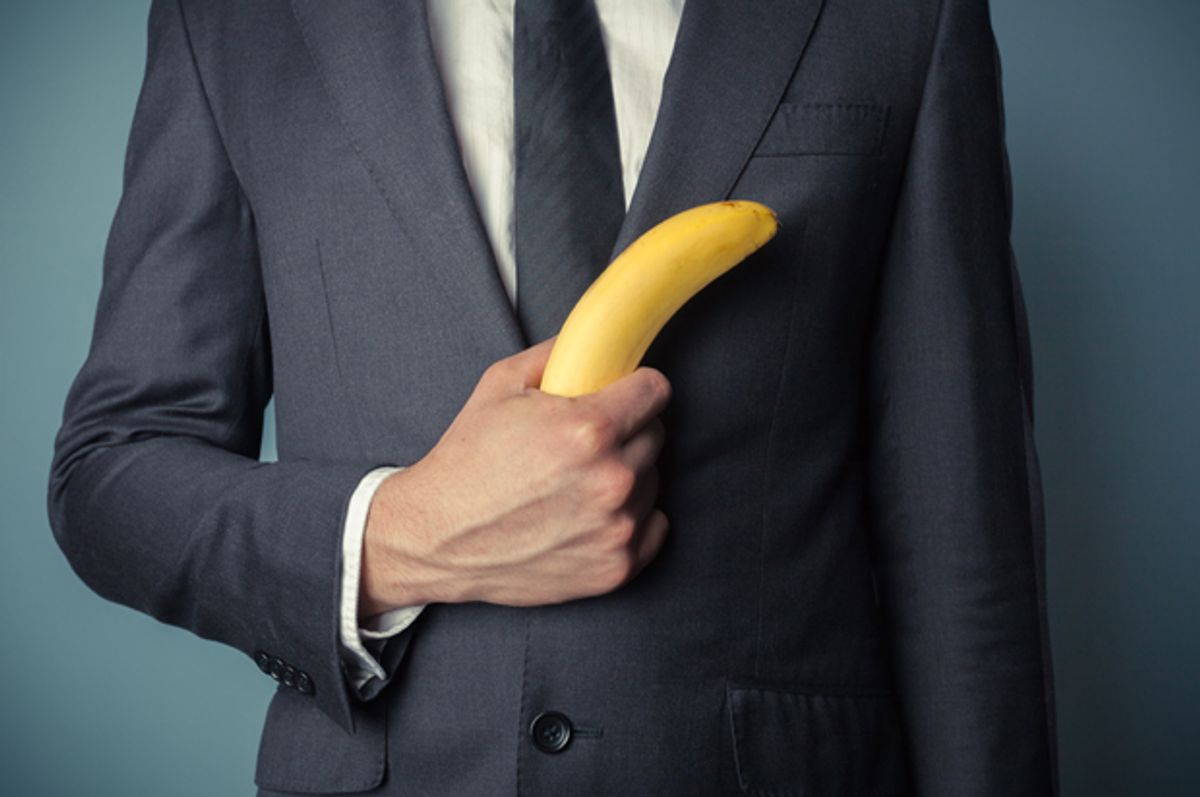 Leave it to a man with no penis to school the Internet on sexual intimacy. That's what happened when a man who allegedly lost part of his genitals in a childhood accident took to Reddit to answer questions about life without a phallus.

Under the evocative screen name "penisindoor," he claimed that at age 12 he put his erect member through a door crack to tease his buddies and one of them -- a friend who was, in "penisindoor's" words, unfamiliar with the basic laws of physics -- slammed it shut. After a trip to the hospital, he says he was left with just the stump of his penis, fully intact testicles and a rerouted urethral opening. (He provided photographic evidence, if you're interested.) The 30-something-year-old is fully capable of orgasm and ejaculation, he says. And, no, the absence of a penis does not prevent him from having sex with his girlfriend.

This last bit came as a shocking revelation to some redditors. How, they wanted to know. Sex equals penis in vagina, right? How can you have sex without a penis?! "I still have part of my shaft under there which still has nerve endings," he wrote in response. "Use your imagination for the rest." He added, importantly, "Any loving couple can be intimate." Those just might be two of the best sex tips around: 1) Use your imagination, and 2) Any loving couple can be intimate. Seriously, sit with that for a minute. So much energy is spent trying to gather wisdom on being "good at" sex. From puberty on, we develop encyclopedic knowledge of all the many positions and moves two or more people can do. We agonize about our anatomy: Is my penis too small? Is my vagina tight enough? Are my boobs big enough?

Great sex is so much simpler than all that -- and "penisindoor" has that figured out. Don't get me wrong: Penises are great. They're super awesome. Indeed, "penisindoor" misses his enough that he's hoping to get an experimental and risky penile transplant -- and best of luck to him. But his story shows that sexual pleasure and intimacy are way bigger than any dick could ever be. Relatedly, a study just came out finding that lesbians and men of all sexual orientations experience more orgasms than heterosexual women. (We needed science to tell us this?) It just goes to show that penis-in-vagina sex is just one kind of sex, and that it certainly isn't inherently the most mutually pleasurable kind.

Sex therapist Ian Kerner told me, "As a culture, we are very much caught up in the 'intercourse-discourse' which privileges penis-vagina sex over other forms of sex-play, but there are many pleasure-paths worth exploring," he said. "Between a creative, caring sexual mind and a fully functional penis, the former will more consistently generate orgasms than the latter." And, for the record, sexual pleasure is not all that uncommon in extreme cases of injury like this one. "Orgasm and ejaculation are separate processes and even men with severe spinal injuries are known to experience the former, so it's not at all unlikely that this man would be able to experience the pleasurable sensations of gratifying sex in his own particular way," says Kerner.

I showed the AMA to Debby Herbenick, a sex research at the Kinsey Institute, and she loved "penisindoor's" perspective. "We all have things we cannot change in life whether it's our body shape or our age, or that we're all aging, or our breast asymmetry or an STI or a special interest," says Herbenick, author of "Sex Made Easy: Your Awkward Questions Answered — For Better, Smarter, Amazing Sex." "Whether we approach this feeling 'stuck' or from a perspective of possibility is a huge part of it." She added, "Knowing that openness and imagination are important is valuable, as is understanding that intimacy is about more than parts. Arousal is about more than parts."

Speaking of intimacy, "penisindoor" honored his girlfriend's request that he keep the details of their sex life private. He gamely answered redditors questions unless they veered into territory his girlfriend was uncomfortable with. What a man, eh?

Now, all this comes with a great big caveat: His story has yet to be verified, his original post has been taken down and he didn't respond to my requests for an interview -- so who knows just how legit it is. But whoever "penisindoor" is, he exhibited a startlingly enlightened view of sex, the kind you rarely ever see in online forums filled with identity-obscuring screen names. It's a welcome reminder in our dick-obsessed culture that sex can happen without a penis. Oh, also? Not all men have penises.