There is so much wrong with this cop's victim-blaming screed

Cop Sunil Dutta exemplifies what is wrong with police in the U.S. 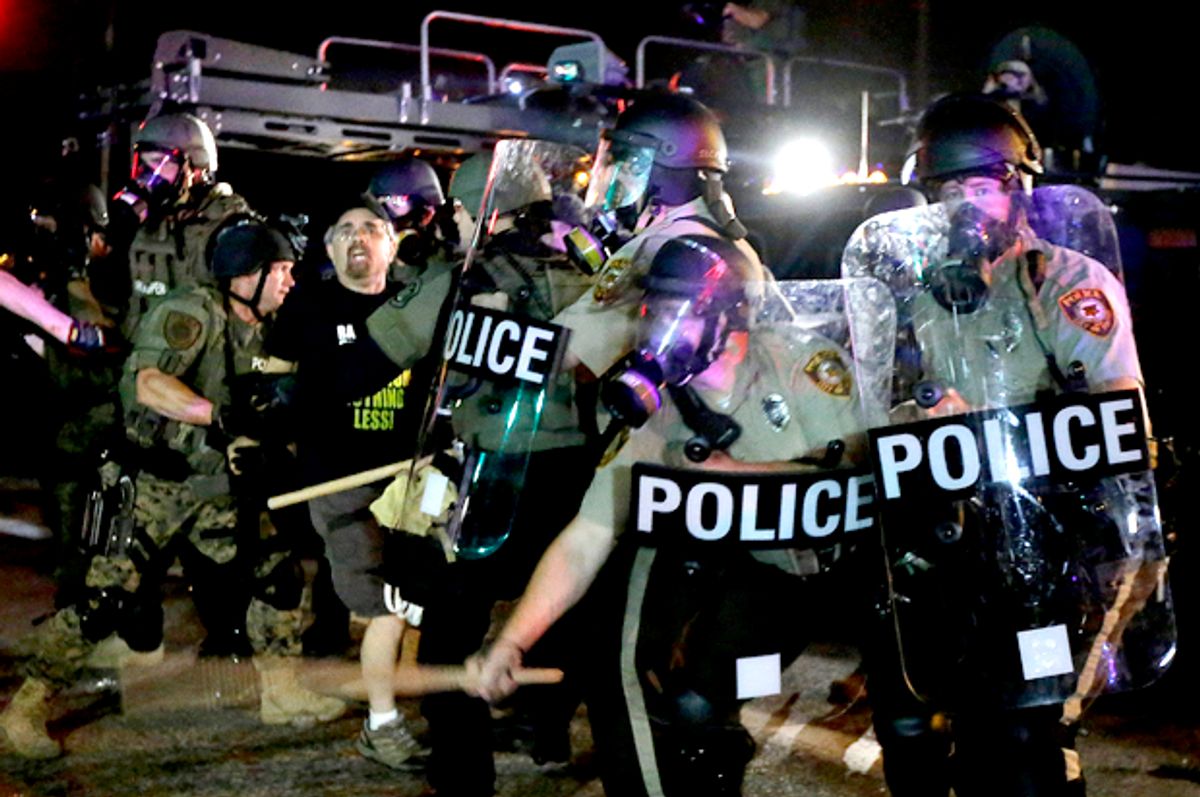 A man is detained after a standoff between protesters and police Monday, Aug. 18, 2014, in Ferguson, Mo. (AP/Charlie Riedel)
--

This morning, the Washington Post published an Op-Ed titled "I'm a cop. If you don't want to get hurt, don't challenge me." Surely, the headline is a quote from someone the writer spoke with, or, maybe, the whole thing is satire?

In fact, the article was written in earnest by Sunil Dutta, an adjunct instructor at Colorado Technical University and police officer with the Los Angeles Police Department. Dutta was inspired by the killing of Michael Brown to write in defense of cops. "Cops are not murderers," he insists in his third sentence.

The fact is that some cops, just like some people, actually are. Because cops are people.

"Here is the bottom line," he writes, "if you don't want to get shot, tased, pepper-sprayed, struck with a baton or thrown to the ground, just do what I tell you. Don't argue with me, don't call me names, don't tell me that I can't stop you, don't say I'm a racist pig, don't threaten that you'll sue me and take away my badge. Don't scream at me that you pay my salary, and don't even think of aggressively walking towards me. Most field stops are complete in minutes. How difficult is it to cooperate for that long?"

Could that be a real paragraph published in the Post?

How about the University of California, Davis, students who sat peacefully as part of the Occupy movement in the middle of campus. When they refused to disperse (because it is their First Amendment right to hold nonviolent demonstrations), was it their fault they were pepper-sprayed because the cops "felt threatened"?

How about when officers held Eric Garner in a chokehold when he objected to their questioning? Was he wrong to scream, "I can't breathe!" in an attempt to alert the cops he was asthmatic? Is it his fault that he died?

Or what about when five teenagers were coerced into accompanying the NYPD to the precinct where they were, again, coerced into giving false confessions for beating and raping a female jogger in Central Park? Did they spend 13 years in prison for a crime they didn't commit because they didn't cooperate with the interrogating officer?

Dutta admits that he knows some police activities are illegal. "You don't have to submit to an illegal stop or search," he says. "You can refuse consent to search your car or home if there's no warrant (though a pat-down is still allowed if there is cause for suspicion) ... Unless the officer has a legal basis to stop and search you, he or she must let you go. Finally, cops are legally prohibited from using excessive force: The moment a suspect submits and stops resisting, the officers must cease use of force."

"But if you believe (or know) that the cop stopping you is violating your rights or is acting like a bully, I guarantee that the situation will not become easier if you show your anger or resentment ... Save your anger for later, and channel it appropriately. Do what the officer tells you to and it will end safely for both of you."

The thing that is so outrageous about this article is that it implies that Michael Brown and other victims of police brutality must have wronged the offending officers in some way. They must have, because cops are so impeccably trained and would never stray from protocol.

Yes, if you are arrested, the ACLU recommends that you cooperate with the police officer and submit to the arrest. The thing is, though, that cops aren't always right or doofily misguided (i.e., "Whoops, we were wrong. You can go now"). Sometimes, cops, just like other people, make bad decisions. Sometimes cops decide to take unrelated anger out on civilians. Sometimes cops get carried away with the power of their position. Sometimes cops commit crimes.

The problem with institutionalized positions of authority is exactly what Dutta accidentally demonstrated -- individuals in dominant social positions think that they are absolved of any criminal or otherwise malevolent impulse just because of their title. We need to change the relationship between police and civilians from one of distrust to one of mutual respect, but given recent events, I don't know how we could.