They are no longer police: Why Ferguson reminds us that America is not exceptional

The police are no longer here to protect us. They are a hyper-militarized militia that provokes and antagonizes 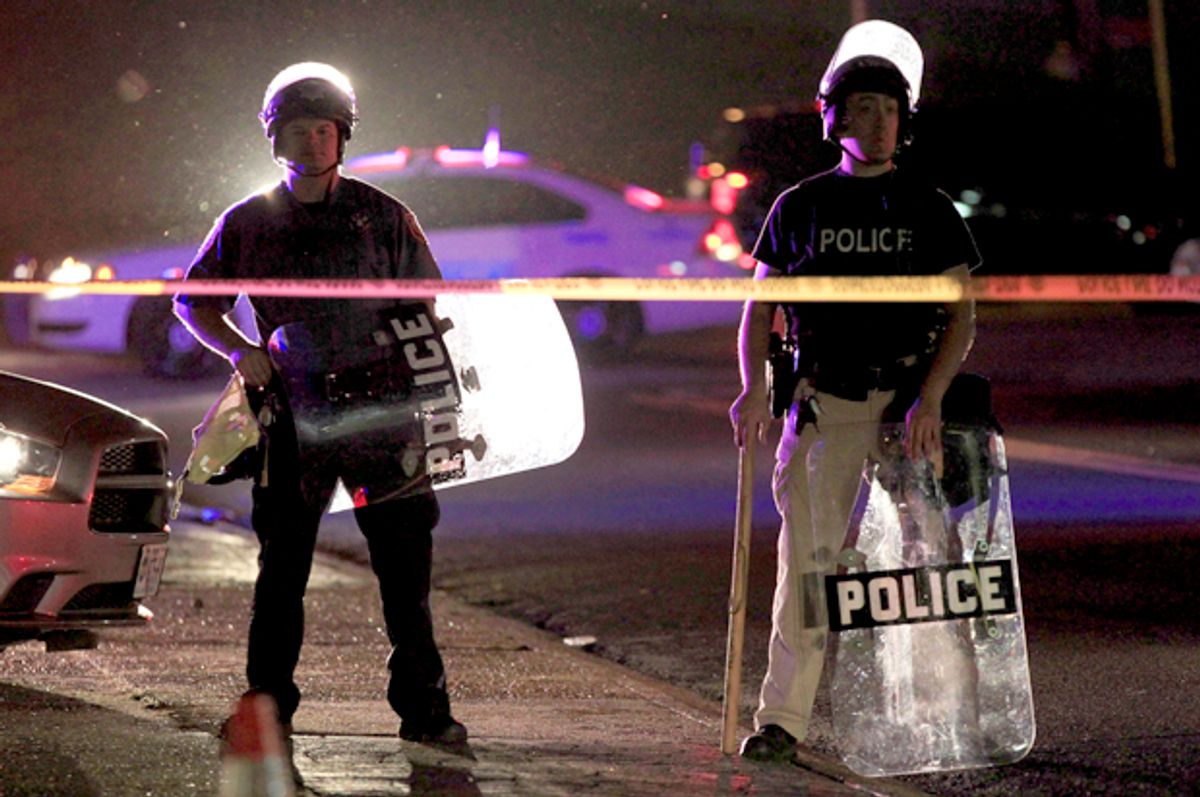 Between Israel's bloody war with Hamas, the brutal crusade by ISIS to reshape the Middle East and Russia's continued aggression in Ukraine, it's easy to focus our collective attention on the global chaos happening around us, while at the same time overlook what's taking place right here in America.

With the recent shooting of an unarmed African-American teen by police in Ferguson, Missouri, and the subsequent crackdown that has ensued, the domestic news blinders have been lifted. Suddenly, international headlines typically reserved for foreign wars and political conflicts have shifted from Israel, Iraq, Syria and Ukraine to the heartland of middle America.

The spark that lit the flame of unrest occurred on a Saturday afternoon earlier this month when Ferguson police gunned down an innocent college-bound teenager by the name of Michael Brown, littering his body with nearly a dozen bullets in broad daylight.

But what has catapulted the small-town tragedy into a global news event is how the police have responded to civilian protests demanding justice for Brown's death.

Aside from the egregious violation of civil liberties, the most worrying development of the crackdown is how the police have appeared and acted like soldiers, not law enforcement, treating the streets of Missouri as if they were the streets of Kabul or Baghdad.

Instead of black shoes, the "police" are wearing boots. Instead of blue uniforms they're wearing camouflage and SWAT gear. Instead of holding batons in their hands, they're armed to the teeth with assault rifles. Instead of keeping their sidearms in their holsters, they're pointing sniper rifles directly at civilians, literally drawing a red dot on their chests as targets. They're riding in armored trucks and Humvees with machine guns mounted on the roof, ready to fire at will.

Simply put, they are no longer police. They are a menacing, hyper-militarized militia, treating innocent civilians as "enemy combatants," not American citizens worthy of protection.

While the exact circumstances of Michael Brown's death remain unclear (police claim he reached for an officer's gun, an eyewitness says he did not), what cannot be disputed is the horrific, shameful response to the shooting by the Ferguson police.

First off, the police let Brown's body lie in the street for hours after his death, showing a repulsive lack of respect reminiscent of how pro-Russian separatists disgracefully treated bodies in the aftermath of the Malaysia Airlines crash over eastern Ukraine earlier this summer.

To make matters worse, nearly a week after Brown's death, the police have still yet to charge the officer who killed Brown with a crime. This is the driving force motivating protesters to demonstrate against police.

Simply put, they are seeking justice.

The elephant in the room, which many cable news outlets have tried to gloss over, is the racial divide that exists at the center of the standoff between protesters and police.

The city of Ferguson is 67 percent African-American. The Ferguson police force is 94 percent white.

Because that statistic alone isn't evidence of racism, it's important to compare the Ferguson protests to others that we've seen recently in America.

For example, take the Bundy Ranch showdown in Nevada from earlier this year.

When federal authorities threatened to take Cliven Bundy's cattle because he hadn't paid grazing fees for over 20 years, a far-right, anti-government militia rushed to Bundy's defense, pointing sniper rifles at government forces and vowing to "take them down" if they dared to proceed.

And what did the federal agents do when threatened with violence by an all-white militia?

They backed down, of course.

But in Ferguson, unarmed African-Americans protesting the death of a teenager are tear-gassed, assaulted and arrested.

The stark contrast between how authorities are treating the Ferguson protests versus how they handled the Bundy Ranch showdown is painfully obvious.

When confronted with white, heavily armed anti-government militias, the police walked away. When confronted with unarmed, peaceful African-American protesters with their arms in the air shouting "hands up, don't shoot," they bombarded them with tear gas, rubber bullets and a military force fit for warfare in Baghdad.

When the war comes home

After a decade of war in Iraq and Afghanistan, the battles fought in the Middle East are returning to American soil.

Leftover military equipment from Kabul and Baghdad has been brought home, funneled to local police to use seemingly however they see fit.

As a result, American police are shifting from law enforcement to a paramilitary force, outfitted with heavy weaponry and machinery intended to fight terrorists, not unarmed civilians.

The problem here, aside from the obvious anti-democratic transition of law enforcement from those who protect and serve to those who intimidate and terrorize, is that it adds hostility and instigates fear and distrust in the hearts and minds of civilians.

The police are no longer here to protect us. They are here to provoke, antagonize and terrify us.

On a broader scale, what's happening right now in Ferguson reminds us that we Americans are not exceptional. We are not morally superior to so-called third-world countries or immune to the type of police-civilian conflicts normally reserved for places like Egypt or Gaza or Iran.

In fact, in many ways we are no better than Mideast dictators who crack down on peaceful protesters routinely. The fact that suburban Missouri looks like Tahrir Square during the Arab Spring is a testament to that harsh reality.

Most terrifying of all is that this isn't just taking place in Missouri. It's happening all over the country. And unless we take a stand against the hyper-militarization of American police, we're staring at a future where cops are extinct and soldiers take their place. And they won't just use their superior military equipment to suppress and terrorize peaceful African-American protesters in suburban Missouri.

They'll use it against all of us. Everywhere.

Josh Appelbaum writes about politics and current events on his blog, The Postmodern Witness. Follow him on twitter @bostonsboy87.