I hope Mike Brown's killer is charged appropriately. But it's not because I hate cops. It's because I crave justice 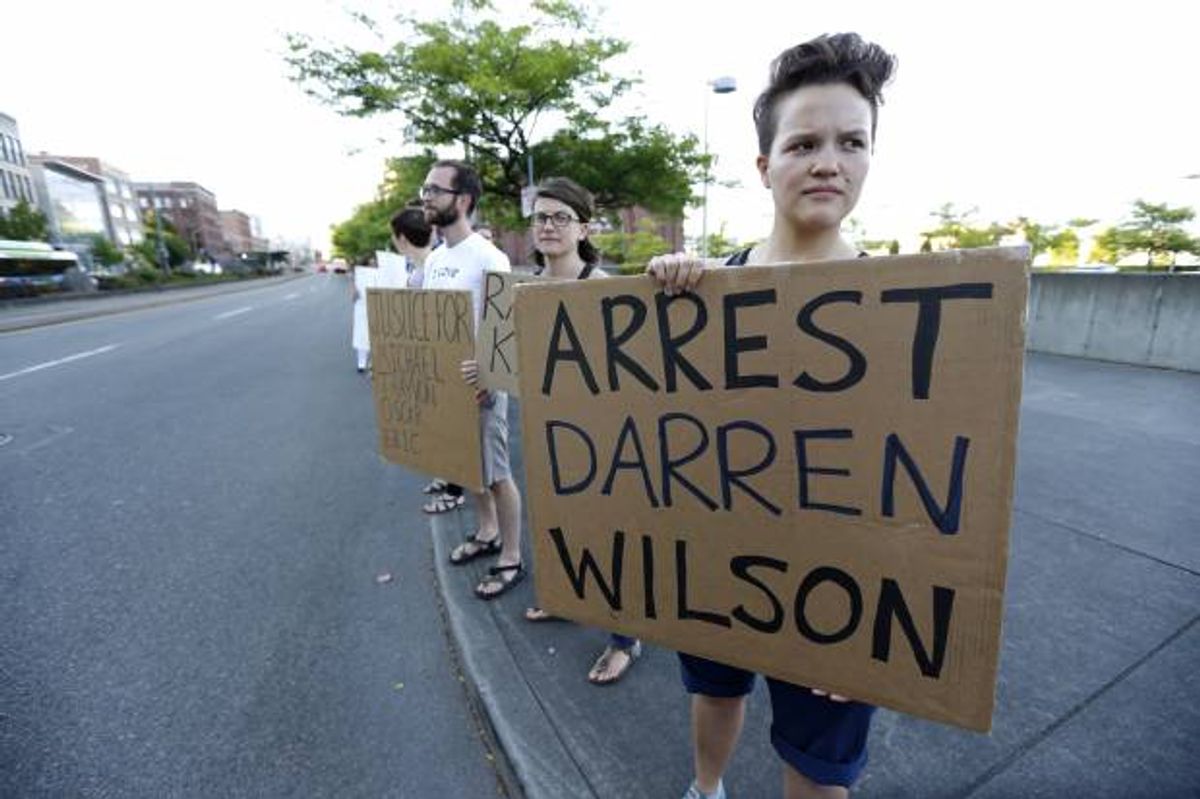 "Not all cops are bad." If you're a liberal critic of the Missouri police's massive overreaction to the protests in Ferguson, Missouri, it's likely you've heard this familiar refrain in recent weeks. The tragic shooting of Michael Brown by Ferguson police officer Darren Wilson has brought police overreach, abuse and creeping militarization to the forefront of our national political conversation. But defenders of police have also come out in support of those who form the "thin blue line" that ostensibly separates us from all the ugliness, cruelty and lawlessness in the world.

Consider a "gofundme" campaign that has already raised more than $70,000 in three days to "Support Officer Darren Wilson," ostensibly for potential legal fees or lost wages. Meanwhile, the "Support Darren Wilson" Facebook page, which was created just last Friday, has already garnered more than 42,000 "likes." Yahoo! News is reporting that people in St. Louis are even putting blue bulbs in their porch lights as a sign of support for police and/or Darren Wilson.

So not all cops are bad -- sure. But there are a number of good reasons why we shouldn't support their actions reflexively -- or rush to their side when one of them does something truly awful.

These are not your parents' cops

As numerous commentators have already noted, American police have undergone a massive transformation in recent decades. Militarized police departments are on the rise, with no sign of this trend slowing any time soon. It started with the war on drugs in the '80s, followed by the now-famous "1033 Program," a federal program that allows the military to sell discount weapons, supplies and munitions to local police departments, capped off finally by a massive infusion of new resources following the Sept. 11 attacks. (And while the 1033 program has earned the bulk of the attention, it's important to note that it's "only" provided local cops with $4.3 billion in new supplies, a number dwarfed by the $34 billion the Department of Homeland Security has provided since 9/11.)

There are plenty of great explainers that you can read about how all of this came to be; the Intercept's Glenn Greenwald recently provided a useful summary, as did Amanda Taub for Vox. But even if these accounts do nothing to change your perception of the police today, one must ask: Where does it end? At what point do cops become so weaponized, so hostile to their citizenry and shielded from responsibility or blame that our suspicions of the institution gain merit? And crucially -- who gets to decide?

There are clearly limits to the formulation that "not all cops are bad," and almost everyone would agree that individual "goodness" can become irrelevant when an individual's actions are in service of a corrupt institution. That American police forces aren't nearly as amoral as, say, the Gestapo (the secret police of Nazi Germany) is a question of degree, not one of kind. Once we allow that "Not all cops are bad" can't possibly apply to the Gestapo in any meaningful way, we tacitly acknowledge that there are limits to the formulation more generally. (If comparing American cops to the Gestapo seems hyperbolic, that's the point.) Whether or not those limits have already been reached by U.S. police departments is irrelevant here. After all, some might find the abuses highlighted by the press in recent years to be not especially extreme or unacceptable given the difficulty of the profession and the enormous challenge of making snap judgments regarding lethal force ... but surely, plenty of residents of Ferguson would disagree. Saying "not all cops are bad," then, becomes dangerously close to saying "people like me get to determine when the conduct of police officers has become bad enough to merit our attention and concern, but people like you don't."

Recently, 125 people came together in Missouri to support Darren Wilson. One hundred and twenty-four of them were white.

I would hazard to guess that many liberals who've written critically of police in the last few weeks have themselves enjoyed good experiences with cops in their own lives. The majority of prominent liberal writers, after all, are white men from middle-class backgrounds. These are not typically the people treated most brutally or arbitrarily. (And I am no exception: My experiences with cops have been especially positive.) Supporters of police might wish that we'd use those experiences to defend cops from critics, but it's near impossible when those positive anecdotes are contrasted with the outright-hostile attitude that people of color regularly experience.

When liberals are being critical of cops, the criticism is largely directed at the institution itself, with its habit of overreaching its authority and protecting its own from prosecution whenever possible. It's an institution that generally bristles at the mere suggestion that oversight is needed (rather than, say, acknowledging oversight as a crucial element of any system that bequeaths exceptional power upon individuals). The legal power to take another person's life surely merits objective accountability, despite what our friends at the Fraternal Order might tell us. Cops are people -- just as fragile and flawed as the rest of us.

When we are critical of cops, then, we're not attempting to shit-talk your cousin, friend, sister or parent who's worked on the force for years and represents its best characteristics. We're criticizing a system that reflexively defends itself from any and all complaint with platitudes intended to shut down debate -- such as "not all cops are bad."

I hope that Darren Wilson will be indicted and charged with whatever crimes are appropriate given the circumstances -- and it's not because I hate cops. It's because I crave justice.