7 disgusting ways Michael Brown and Ferguson have been smeared

How police, the media and politicians have tried to make this about anything other than a dead teenager 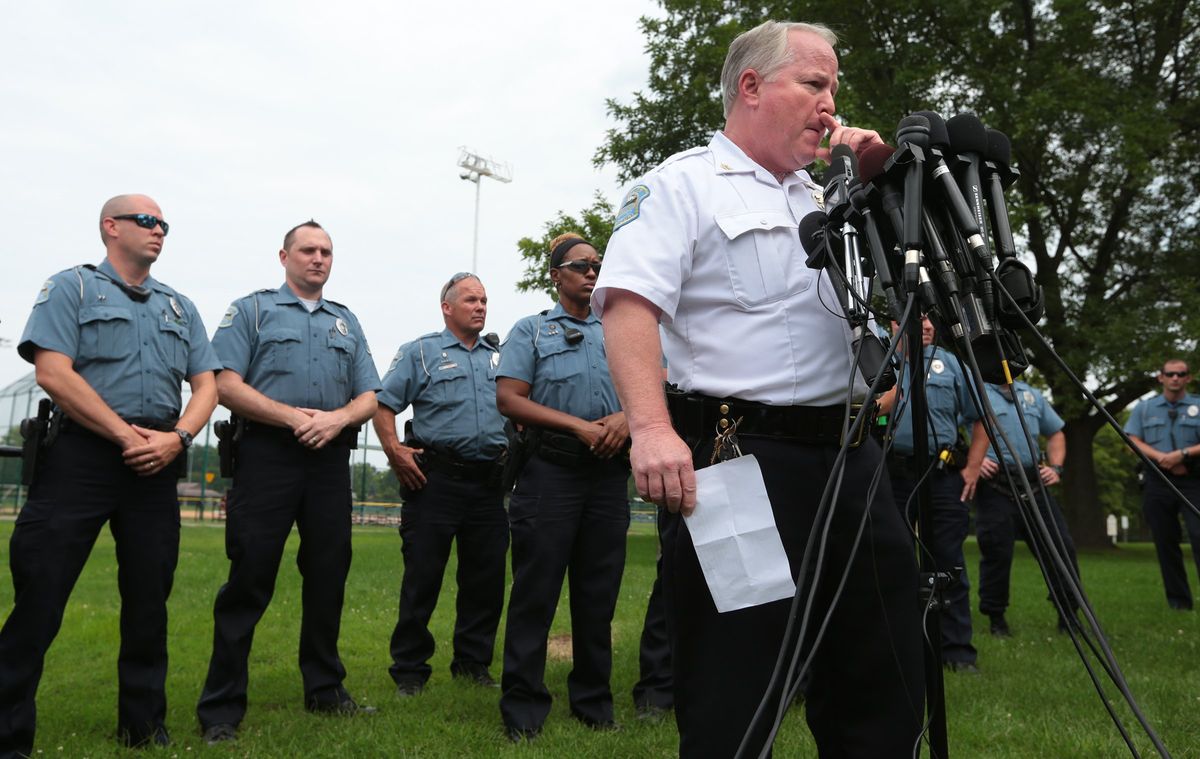 Since Michael Brown was shot and killed by a police officer in Ferguson, Missouri, local law enforcement and much of the mainstream media have been playing by an old script, in which the local police use the press to smear Brown’s character and distract from what really happened.

Meanwhile, a lot of people on social media aren’t buying it. They have noted these police propaganda tactics are tragically predictable, and that too many reporters aren’t asking questions, but playing along as police megaphones.

“We need journalism to kick in and start reporting the story,” actor Jesse Williams  told CNN last Sunday. “This is about finding justice for a kid that was shot. An 18-year-old that was shot. Period. And this idea that because he stole a handful of cheap cigars, that were what, five bucks from a convenient store?”

Williams, who was assailed by rightwingers for wearing a hoodie on the air—then cut to the heart of the matter. He  said there is a double standard where police and mainstream media all too often turn police brutality victims into people who somehow deserved what they got:

According to the most recently available federal crime statistics reported by USA Today, a white police officer killed a black person at least twice a week in the U.S from 2005 through 2012. “The shooting of a black teenager in Ferguson, MO., last Saturday was not an isolated event in American policing. Eighteen percent of the blacks killed during those seven years were under age 21, compared to 8.7 percent of whites.”

Let’s look at what we know about seven key moments or factors that unfolded in the wake of Brown’s death that show how police demonization and media character assassination works. While the full details of what actually happened are not known—that is what the FBI will try to determine—what’s clear is how disinformation from police, spread by an uncritical media, recycles the worst stereotypes.

1. Ferguson Police Quickly Blame The Dead. What happened before Brown was shot six times by Officer Darren Wilson is not fully known. Eyewitness Dorian Johnson told MSNBC that Brown was walking down the street when police drove up and demanded that Brown get into the vehicle and he ignored the order. St. Louis County Police Chief Joe Belmar said Brown fought Wilson and reached for his gun, justifying the shooting. The police did not initially name the officer, although that detail came out a few days later.

Johnson told MSNBC a very different story. He said Wilson drove up in a police truck and aggressively went after the pair. He first demanded that they get on the sidewalk. When they kept on walking, Johnson said that Wilson nearly hit them with his truck, and then yelled and used the truck door to knock Brown down. Wilson then jumped out and grabbed Brown, who resisted being choked, Johnson said. When the pair started to flee, Wilson shot at Brown, who stopped and yelled he didn’t have a gun. Johnson said he saw Brown shot, while facing Wilson, and then collapsing onto the street.

2. Police Release Video Smearing Brown For Alleged Robbery. Before Ferguson police released Wilson’s identity, they released a video that allegedly showed Brown confronting a convenience store employee and taking a package of cigars. Missouri Gov. Jay Nixon toldNBC’s Meet The Press that neither his office nor the state highway patrol team he deployed to take over local policing were informed beforehand. “Quite frankly, we disagree deeply,” Nixon said. “To attempt to, in essence, disparage the character of this victim in the middle of a process like this is not right. It’s just not right.”

3. Mainstream Media Makes The Video Bigger Than His Death. As the department surely knew, the release of the video would swamp most of the coverage, because any police investigation, whether by that department or outside agencies would take time. The police know the mainstream press will consider them to be an official source, because they are an arm of government, more so than a biased participant. However, as the DailyKos’ Barbara Morrill reported, the video’s release before police identified the shooter meant that much of the media coverage would focus on the robbery.

“Well, that didn’t take long,” she wrote. “Barely two hours after Ferguson Police Chief Thomas Jackson named the police officer who gunned down 18-year-old Michael Brown last Saturday, and the demonization of—you guessed it—Michael Brown is well underway.” She cited half a dozen headlines mixing the officer’s identity with the alleged robbery, and this tweet from @fivefifths: “We officially have more facts about a likely unrelated robbery of a single [pack of] Swisher [cigars] than we do about the execution of Mike Brown.”

4. Police Release Autopsy Detail Saying Brown Had Smoked Pot. The DailyKos’ Morrill concluded, “The victim has become the suspect.” That was before another leak further victimizing Brown—a preliminary autopsy report showing traces of marijuana in his blood. It hardly matters that many scientific studies have found that marijuana doesn’t increase violent behavior. This was more innuendo from police telegraphing that Brown was no angel. Right-wing media took the ball and ran with it. Fox News interviewed the medical examiner who conducted the initial autopsy, who speculated on the air that because of pot, Brown “may have been acting in a crazy way and may have done things to the police officer that normally he would not have done.”

5. Mainstream Media Doesn’t Question Source’s Motives. From a media criticism perspective, what’s incredible is not just that these narratives—the alleged burglary or pot smoking—are far less important than the fact that an unarmed teenager was shot and killed by a police officer. The local police aren’t innocent bystanders. They are not a disinterested source. Neither is the local medical examiner who works with the police. But that conflict of interest does not stop certain outlets from quoting this law enforcement community to again smear Brown.

6. Next Smear: Ferguson Called Crime-Filled Community. As MediaMatters noted, “Right-wing media emphasized the supposed prevalence of ‘black-on-black’ violence in response to the shooting death of unarmed black teen Michael Brown... Such emphasis takes the crime statistics out of context in order to hype the racial aspect.” Actual crime statistics for Ferguson reveal it is both better and worse than national averages, depending on the crime. Nonetheless, commentators at the  Wall Street Journal, National Review Online, Fox News and elsewhere are calling it a bastion of bad behavior.

7. Public Defenders Say There’s Nothing New In Police Smears. Public defenders face off in court representing low-income clients against police and prosecutors. Miles Gerety, who recently retired after three decades as a Connecticut public defender specializing in death penalty cases, said he was “not surprised at all” about the Ferguson police. “It’s an unsophisticated albeit primative attempt to justify what seems unjustfiable: ‘The deceased was a bad person and thus deserved to die.’” Gerety also noted that these slurs and character assassinations would not be allowed in a courtrom trial, even though they are getting media play and shape public opinion.

“A crime is a crime. Just because your victim may have been a bad actor at some point, doesn’t make killing that person justifiable,” he said. “In a trial for murder, for instance, the fact that the victim may have committed a crime before being killed would be completely irrelevant unless the defendant knew of the conduct and it somehow related to a self-defense claim. It’s ironic that the Ferguson police resorted to this tactic of blaming the victim when you damn well know they’d blast any defense lawyer who resorted to the same tactic. I’ve found it doesn’t pay to malign the dead.”

The unrest and protests following Brown’s killing have put the militarization of local police forces in the national spotlight, especially as police who look like soldiers are facing down protesters on Ferguson’s streets. But the most important issue that’s not getting widely discussed transcends the horrible specifics of Michael Brown’s death: the continuing trend of police officers shooting and killing black men, instead of using other tactics to deal with confrontations.