At CNN's "Black and White in America," the anchor couldn't believe this can still happen. Here's why he's clueless 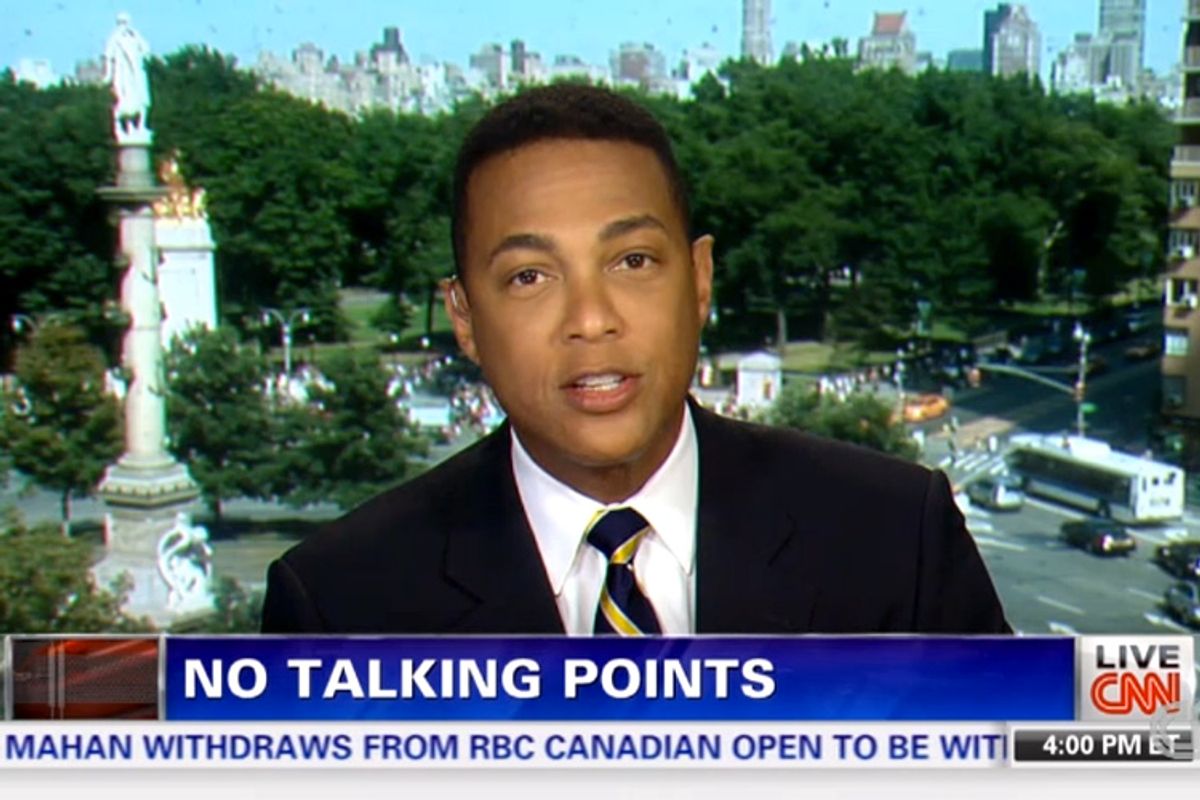 Last night on CNN's townhall television special,  "Black and White in America," anchor Don Lemon shared a troubling experience from his time reporting in Ferguson, Missouri. Here's what he had to say:

"I’m just going to be honest with you. Last night, one of my producers said that they — I won’t say if it’s a he or she because I don’t want to give anyone away — said they came in contact with one of the members of the National Guard and that they said, ‘You want to get out of here because you’re white because these n-words, you never know what they’re going to do.’ True story. I kid you not. 2014, a member of the National Guard. And my producer doesn’t lie. It is a true story.”

Lemon, who is one of a handful of black reporters and personalities on CNN, has in the past expressed his disdain for the ever-loaded N-word on a number of occasions. In a segment on CNN last year titled, "No Talking Points," Lemon implored the black community to "clean up" their act, offering five suggestions on how black people could improve their lives. Among these suggestions, Lemon argued that blacks should stop calling each other "niggas." He also condemned black teenagers' sagging pants as a plague holding back their progress and hypothesized that the reason streets in the black community are dirtier is because blacks are predisposed to littering more. Lemon then commended Bill O'Reilly for having "more than a point" when it comes to making blacks more respectable. "It's time for some tough love," the CNN host said.

Here is the segment:

While in Ferguson, Lemon encountered some tough love being spread by police authorities attempting to control protesters. During a segment for "The Situation Room w/Wolf Blitzer," Lemon was pushed repeatedly by officers who seemed unconcerned with his white-collared shirt, media credentials and fresh haircut.

"I think we're about to be arrested because we're standing on the sidewalk," Lemon said as a police officer ushered him toward the sidewalk, adding, "That's what's happening here. People are here. And they are standing -- you can see what's happening. We've been standing here all day ... They told us to come here. I can't move. I'm not resisting a police officer. I'm being pushed back."

Officers informed Lemon that he posed a traffic concern, and that there was a need to herd everyone in the general vicinity into an empty parking lot where they wouldn't get hit by a car. Lemon seemed befuddled.

Lemon's experience punctuated a tumultuous week of unrest in Ferguson, where police and authorities have repeatedly clashed with residents protesting the death of Michael Brown, a teenage black kid who was killed by a white cop, Darren Wilson. An autopsy released earlier this week, first reported by the New York Times, appeared to confirm numerous eyewitness accounts of the events leading up to Brown’s death — that Brown was shot at least six times, two of which hit the teen in the head.

Missouri Gov. Jay Nixon declared a state of emergency in Missouri earlier this week, calling in the National Guard to calm tensions that have flared.