In defense of the "ugliest house in Queens"

The New York Times calls this passive home an eyesore. But it's so much more than that 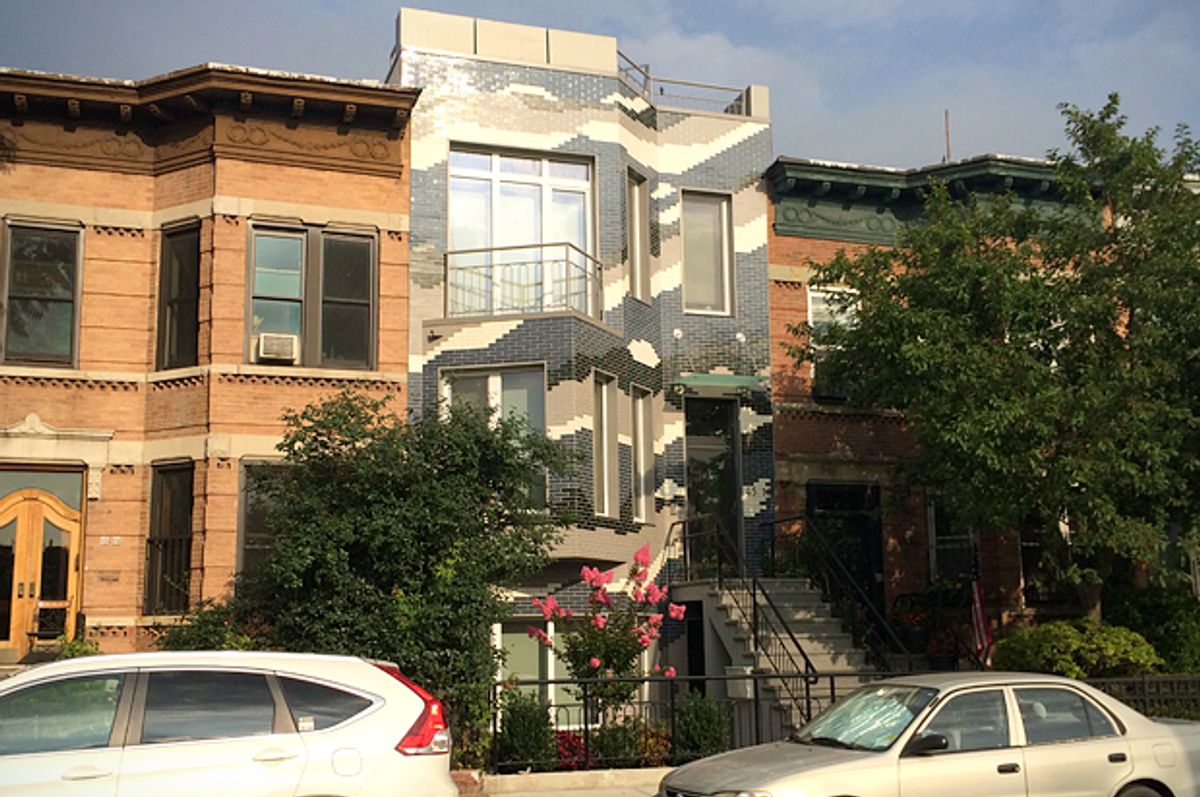 Architect Thomas Paino has created something extraordinary: a two-family rowhouse in Queens, New York that's certified "passive," meaning it meets an extremely strict standard of design that minimizes its energy usage and, by extension, its environmental footprint. "You begin to ask yourself, how do you want to live and do you want to waste all these resources,” Johnson explained of his noble-minded inspiration for the project. “America is founded on waste, so it’s not easy.”

Too bad the outcome is so darn ugly, says the New York Times. Or, as Matt A.V. Chaban so wittily puts it, "Outside, the house looks like something dropped from the heavens. Assuming God was really into Legos."

Chaban's not the first to make the Legos comparison, and it's kinder than some other insults that have been hurled the home's way. Even the non-profit group NY Passive House was quick to put it down, out of fear that people would think passive homes are necessarily unattractive. (The irony, there, is that such homes tend to be uniquely beautiful.)

To be fair, the so-called "Climate Change Rowhouse," with its recycled tilework inspired "in part by 18th-century Portuguese facade work" and in part by clouds, is not everyone's style. I paid a visit to Long Island City to see it for myself, and let's just say I didn't have any trouble finding it. But if I'd managed to design a house that used about 95 percent energy for heating and cooling than traditional homes, and which boasted a green roof and a solar powered water heater to boot, I'd want to be loud about it, too.

While passive homes are all the rage in Europe, where there are over 30,000 of them, only about 90 such houses are certified in the U.S.   "The technologies and methods of construction are relatively new for the United States, and certainly not commonly applied in row houses undergoing major rehabilitation and updating," read a post dated March 2013 from the official Climate Change House blog. The home's designers proposed the project as a "demonstration house," which they would carefully document and monitor in order to "set an example of how we can meet the challenges of a changing climate."

In other words, they want this house to make a statement. As Paino himself told the Times: “I don’t really care what people say, so long as they’re talking about the house and the environment." In that respect, he couldn't have been more successful.

As to the fact that the house doesn't fit in with its neighbors? Well, that's kind of the point as well. "Traditional homes," according to one group's analysis, waste the equivalent of one major oil spill's worth of energy each year through sheer inefficiency. In the U.S., according to the National Science and Technology Council, buildings are responsible for about 40 percent of total energy consumption and 72 percent of electricity generation. By 2025, it's estimated they'll will become the single largest drain on the global energy supply, topping the combined transportation and industrial sectors. Maybe what we need is a new definition of "ugly." One, preferably, that puts the onus on the effect buildings are having on the planet.

Speaking with Salon about the central role of smart building design in fighting climate change, vice president of research at the U.S. Green Building Council and IPCC author Chris Pyke emphasized our need to take "quick, aggressive action" to increase energy efficiency. Add "unabashed" to that prescription, and you've got Climate Change House. When you look at it that way, it's almost beautiful.