Let's not fawn over male celebrity feminists: Making stars weigh in on women's rights is hurting the cause

Joseph Gordon-Levitt's recent remarks launched many a virtual feminist high-five. But why is the media so excited? 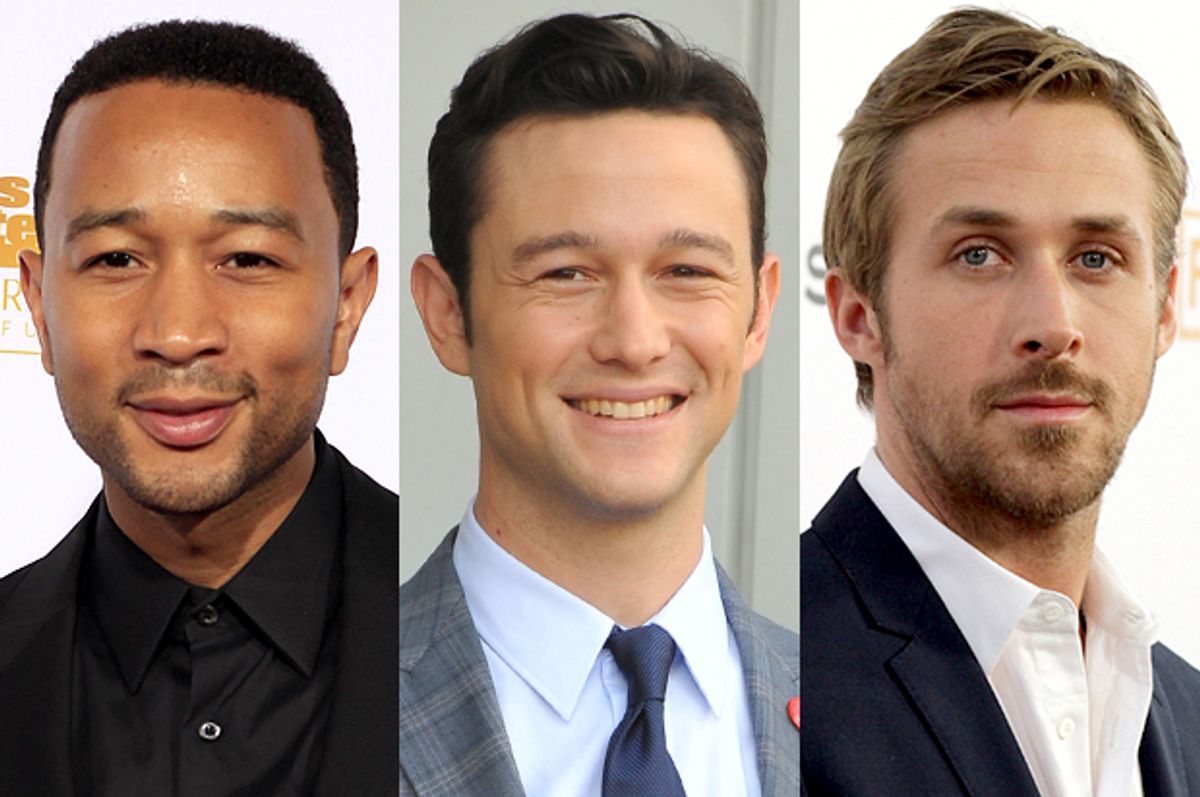 “Here’s Joseph Gordon-Levitt’s Incredible Definition of Feminism,” panted an article on Time magazine’s site last week. “JGL is one of the handful of male celebrities to use the ‘f’ word,” noted the subtitle, winding up the pitch and prepping readers for something major. Was Gordon-Levitt going to deliver himself of a Judith Butleresque deconstruction of gender? Go deep into an intersectional philosophy informed by his experience of playing a sex worker and abuse victim in past roles?

It turned out the “incredible” definition the headline referred to — and it seems clear, before you ask, that Time was using the word to mean “amazing” rather than “not actually credible” — was a bit from a recent Daily Beast Q&A, in which the interviewer asked Gordon-Levitt his opinion on the spate of fellow young stars speaking against feminism (à la Shailene Woodley):

Coming out against the label? Wow. I guess I’m not aware of that. What [feminism] means to me is that you don’t let your gender define who you are—you can be who you want to be, whether you’re a man, a woman, a boy, a girl, whatever. However you want to define yourself, you can do that and should be able to do that, and no category ever really describes a person because every person is unique.

It’s an incomplete definition, but in celebrity terms it’s worlds better than Woodley’s feminists-hate-men rubbish or any of the other misguided statements that tend to result from stars talking out their asses. Gordon-Levitt has clearly thought about issues of gender quite a bit: His 2013 directorial debut, "Don Jon," was a critically acclaimed indictment of how pornography can warp our sense of reality. It was in interviews after its release that he first addressed feminism, saying, “I think it’s important to think about gender roles for women and for men. It’s irrefutable that historically women have gotten the raw end of the deal and have been oppressed since the beginning of history. But I also think it’s true that both men and women, today especially, are sort of corralled into roles based on their gender that are not necessarily healthy.”

The statement launched dozens of virtual feminist high-fives, and media has been quick to report on all breaking Joseph-Gordon-Levitt-is-a-feminist news since; his Daily Beast quote last week has resulted in more than 45 news hits with headlines like “Joseph Gordon-Levitt Proud to Be a Feminist” and “Joseph Gordon-Levitt Says Feminism ‘Benefits Society’.”

It was a similar story for musician John Legend in 2013, when Ms. magazine saluted him for “coming out” as a feminist when he opined that “If men care about women’s rights the world will be a better place. We are better off when women are empowered — it leads to a better society.” Legend, whose quote was occasioned by a performance for the international organization Chime for Change, promptly became the subject of swoony press attention, including an unintentionally Onion-esque Huffington Post Women slideshow titled “John Legend and 9 Other Famous Men Who Support Women.” All right, ladies of the world, you’ve got a whopping 10 men in your corner, including Jon Hamm! Lean on in!

Indeed, if there’s one place where male celebrity feminists seem to proliferate, it’s in the listicles where they are celebrated for, well, being feminists, with recycled quotes alongside winsome gifs. HelloGiggles has “7 Male Celebrity Feminists Who Make Us Proud” (besides Gordon-Levitt and Legend, it includes Patrick Stewart and Mark Ruffalo); Bustle offers up “9 Feminist Male Actors Who Speak Out for Equality” (in which the above mentioned four are joined by Harry Belafonte and Ross from "Friends," among others); and Huffington Post Woman counts “28 Famous Men Who Prove You Don’t Need to Be a Woman to Be a Feminist.” (Hold up, HuffPo, didn’t your slideshow just say there were 10? So confusing!) Some of these men have, like Legend, fundraised for women’s causes; others have simply remarked in interviews about supporting reproductive choice or the lack of great roles for women in Hollywood.

Both Gordon-Levitt and Legend seem like solid dudes, as do those eight to 28 other lady-supporting famous men, and I have no intention of discounting their words or their willingness to have them be headline fodder. In a cultural moment when members of the Tumblr Women Against Feminism seem to think feminism means that all men are suddenly Raptured, leaving hapless women unable to open jars and move furniture, every voice that can support feminism with thoughtful, well-considered words is essential. This isn’t a men problem. It’s a media problem.

Let’s consider: How many female-identified people have talked, written and protested around the simple idea that women deserve the same human rights and respect as men? Thousands. Millions. That this idea becomes front-page news only when a handsome celebrity with a project to pitch voices it is a severely mixed blessing. It means that decades of feminist work has reverberated outside the movement, sure. But by celebrating pronouncements that, in most cases, are simply common sense, the media is also reifying the belief that an idea becomes legitimate only when it is voiced by a man.

In the wake of the first feminist coming of Gordon-Levitt — which happened to coincide with the spectacularly ugly public flameout of a well-known community-college professor who admitted to using feminism as a route to scoring with female students — Cassandra Leveille penned a frustrated call to “Stop Fawning Over Male Feminists” for the site PolicyMic. “We are far too eager to heap praise on men just for claiming the label ‘feminist,’ even if they don't follow through with action to challenge the larger sexist culture,” wrote Leveille.

Her point is worth reiterating. Hundreds of thousands of women across the world actively work every day toward the goals of feminism — which is not dominating or replacing men, but doing things like helping girls in developing nations go to school without being maimed, running for office, volunteering as clinic escorts, writing comprehensive policies for reporting campus sexual assaults, working in after-school STEM programs, and thousands of other things. For these people, making the world a better place not just for women but for all people is simply business as usual, and they do it with little recognition, let alone public adulation. Do they give a rat’s ass whether Ryan Gosling or Mark Ruffalo thinks the concept of feminism in the abstract is cool? Maybe, but most likely they’re more concerned with whether the work they’re already doing will have enough funding to be successful.

Leveille wasn’t taking these men to task for not doing enough for feminism, but rather cautioning the rest of us that our low expectations of support and feminist solidarity can lead us to do things like, well, create listicles predicated on the idea that celebrity men who respect women are performing some kind of revolutionary act. Feminism is such a contested affiliation that almost any marketable celebrity who takes on the mantle is held up as proof that feminism is working. And, as Leveille noted when I asked her for comment: liberal, white-leaning publications and blogs are “so wrapped up with disproving the stereotype of feminist-as-man-hater that [they] will see men declaring themselves feminists as important activism over their actions.”

Doing the work of being a feminist — or, to use the common parlance, a feminist ally — isn’t exactly fun, and this is something that men who may or may not take on the descriptor realize. Ask the 39-year-old man who, last week, was hospitalized after intervening in an episode of street harassment in Philadelphia: After seeing a group of men in a car harassing some women in Rittenhouse Square, he cautioned them, “Watch what you’re saying,” and was knocked unconscious for his trouble. (Keep that in mind next time someone tries to argue that catcalls are about “complimenting” a woman, rather than exerting power over her.)

The concept of feminism is unique among social-justice movements in that it currently exists in multiple states that are characterized as simultaneously positive and negative, laudable and vilified, mediated while being consigned to the past. While one celebrity is claiming that feminism “is just not an interesting concept,” the very things that necessitate the movement are happening in schools and workplaces and villages globally. For this reason, self-applying the term “feminist” should, for any celebrity of any gender, be a matter of not just saying, but doing.

And mainstream media would do well to push a little harder past stereotypes, even though they make for clicky headlines. Right now, for instance, Gordon-Levitt is making the media rounds for the new film "Sin City 2: A Dame to Kill For," which, like the first "Sin City," is a gritty neo-noir in which the defining feature of female characters is that they are naked, brutalized or both. (The first film featured, among other charmers, a cannibal who feeds on the city’s women and mounts their heads on his wall like trophies; the plot of the sequel has a more you-go-girl flair that centers on sexualized female vengeance.) It would seem worthwhile, given Gordon-Levitt’s belief in equality, for media outlets to ask how he squares his own ideals of gender freedom with his involvement in a franchise whose own gender roles are, to put it lightly, unevolved. For other male listicle feminists, media might consider asking how their belief in female equality is translated into action — and how they encourage other men to get on board.

Leveille agrees. “I would love to see the media ask, for example, ‘What feminist activism are you doing? What causes within the movement are most important to you?’ to shift the narrative from just thrusting on the label to action.” In other words, it’s time for mainstream media to move beyond the wacky idea that men might care about women’s rights and resources and contextualize their ideals. It’s not too much to ask — and, unlike recycling old quotes, it has the potential to actually be incredible.