Michael Brown, Gaza and a crowd-sourced record of abuse: In defense of "clicktivism"

From Ferguson to Palestine, social media has transformed protests as we know them. But can it last? 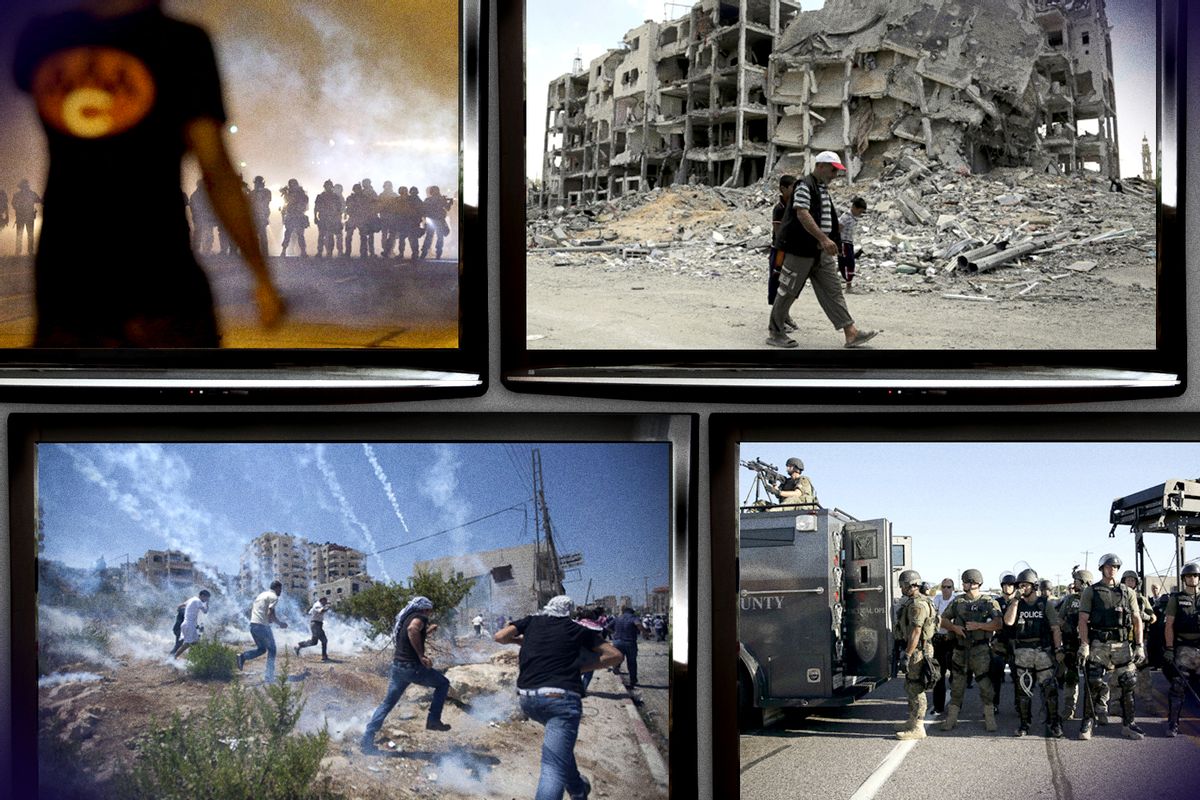 Ah, "clicktivism." Is there a clearer shorthand intended to denote the millennial generation's paucity of moral character? (Maybe "selfies," if young people can claim credit for that cultural trainwreck.) To many, "clicktivism," or online movement-building that organizes people around political causes, represents the essence of millennial laziness, self-righteous armchair activism taken to its logical conclusion. Who needs street protests or community organizing when we can just sit at home -- presumably in our pajamas -- believing ourselves to be fighting to end all injustice and oppression with a simple "like" and a "share"? These low-effort activists, the argument goes, aren't concerned in the least by the fact that #BringBackOurGirls didn't, you know, actually bring back our girls. This is a popular point of view. The fact that Nigerian activist Rosemary Nyirumbe went on "The Colbert Report" and hailed the hashtag campaign's success at bringing the world's attention to the crisis goes largely unmentioned.

Of course, the opposite view -- that social media has profoundly changed the nature of protests and community organizing -- is also suspect. Technoutopians are quick to ascribe credit for any mass protest to the amazing, "democratizing" influence of Facebook or Twitter, as if demonstrations and marches never happened before the advent of social media. But the internet didn't invent protests any more than it created the terrible political and economic conditions that typically precede them. Like most things in this world, when it comes to the merits of clicktivism, the truth resides somewhere in the middle.

For politically-minded individuals hoping to make a difference, the social media toolkit can be an invaluable ally. Just ask social worker, blogger and Twitter activist "Feminista Jones" (that's her nom de web). Hashtag campaigns "often amplify the voices of those whose voices are often ignored," Jones told me over email. They can also help movement-building by "collect[ing] information in one stream". They "facilitate community conversations that anyone can access, from anywhere, at any time."

Jones should know: as the founder of the "National Moment of Silence 2014," or #NMOS14, she helped create "a national moment of silence to honor victims of police brutality, show solidarity with their families, and allow communities to come together in a moment of mourning and support."

#NMOS14 was conceived just after one p.m. on Sunday, August 10th, the afternoon following Michael Brown's senseless death -- and before the first protests in Ferguson had even begun. Over the next eight hours -- largely through Jones' monumental doggedness and focus -- a protest movement was sparked. Was such a rapid, wide-ranging movement even possible without the tools of social media? "Absolutely not," Jones told me, "at least in the way it did. It would take months to organize something like this without Twitter and Facebook. "

#NMOS14 would stretch across the country four nights later, bringing together hundreds of smaller groups -- from Twitter's @DreamDefenders, to more traditional organizations like local chapters of the NAACP -- along with tens of thousands of protesters. What's so incredible about #NMOS14 is the speed with which it caught on: Jones started ruminating on the idea -- not yet fully-formed -- just before noon on Sunday. By 9 pm that night, more than twenty protests were already organized across the country. In the coming days, dozens more would follow. (The incredible real-time story of how #NMOS14 came into existence can be found at this Storify, compiled by Jones herself.)

Of course, the internet's ability to circumvent the mainstream media narrative, to form new communities and organize people around common cause, can quickly degenerate into internecine disputes. Anyone who's ever been a party to a bitter Twitter fight or Facebook dispute is all too familiar with the ways that technology can drive wedges between people just as effectively as it can build bridges. But Jones is undaunted. And she's quick to note that many of the tools that best facilitate online organizing -- social media, yes, but also hashtags themselves -- are overwhelmingly used by the very groups that need real change most desperately. "The only people who complain about using social media to facilitate activism are those who have issues with marginalized people having their voices heard (as women, people of color, and other disenfranchised people are the most likely to use hashtags to this end)."

Of course,  technology can be used for both noble and nefarious purposes. This is hardly a new idea. In his seminal work "The Unbearable Lightness of Being," Czech author Milan Kundera tells a story with eerie relevance to our modern times. In the book, the Prague Spring of 1968 has recently arrived: Czech students and activists are protesting the Soviet satellite government and in short order, the USSR responds heavy-handedly with soldiers and tanks. (Sound familiar?) Sabina, one of Kundera's main characters, is an artist who goes to the protests with her camera to document the Russians' various indiscretions and abuses. At first, the camera gives her power, becomes a weapon that she can aim back at her oppressors. But when the protest is squashed and "order" restored, all the cameras are rounded up, with the images used to determine who was protesting and punish them accordingly. Technology, thought at first to be a tool of liberation, quickly becomes just another instrument of our oppression. Consider the ominous picture painted by the NSA revelations that have dominated the news this past year: imagine how a powerful, autocratic state might abuse this technology. Their power to surveil would be so all-encompassing, so stunning in its totality and scope that it would make George Orwell blush.

Maybe this is all self-evident. After all, it's unlikely that many outside the fraternity of Silicon Valley truly believe that technology is inherently good or inherently evil. It's an amplifier; it can increase the voices of the powerless exponentially -- just as it can amplify their oppression at the hands of the state. The power of clicktivism, then, isn't intrinsic or inherent. But as Feminista Jones clearly shows, when wielded cleverly, it can be transformative.

It's hardly an exaggeration to perceive what's happened in Ferguson, MO, as a product of this new media status quo. The story of the protests -- and the police's aggressive response -- quickly disseminated on the night of Sunday, August 10th. Images of protests and a cartoonish police response spread quickly through social media. Before the producers at CNN even had a chance to sit around their desks and determine whether or not this was a story worth covering, Twitter's collective unconscious had already made up its mind. (It's particularly telling that it would be almost a week before CNN started reporting on the story in earnest, only after its absence from their 24-hour coverage had become completely indefensible.)

The tragic destruction of much of Palestine follows a similar narrative. What's happening in the Middle East is a humanitarian crisis of the first order. But what's different this time is that public opinion seems to have shifted away from universal support for Israel. Commentators have scrambled to present a number of plausible explanations for this movement: Most popularly, many have suggested that Millennials are simply less inclined to support the Israelis, and that this is beginning to influence public opinion. To me, it seems far more likely that the prevalence of Twitter deserves the lion's share of the credit (or blame, depending on one's perspective); much like the tear-gassed-soaked streets of Ferguson, MO, the images from Palestine shocked the world and bent the coverage away from the accepted narrative, the mainstream media's preferences be damned.

We're only beginning to witness the enormous potential of social media to hold our leaders accountable -- and to create a crowd-sourced,  independent record of oppression and abuse. So far, the results have been encouraging. As Jones notes, "People need to know that they are responsible for being the change they want to see. Many people wait for 'leaders' when they are the leaders themselves."