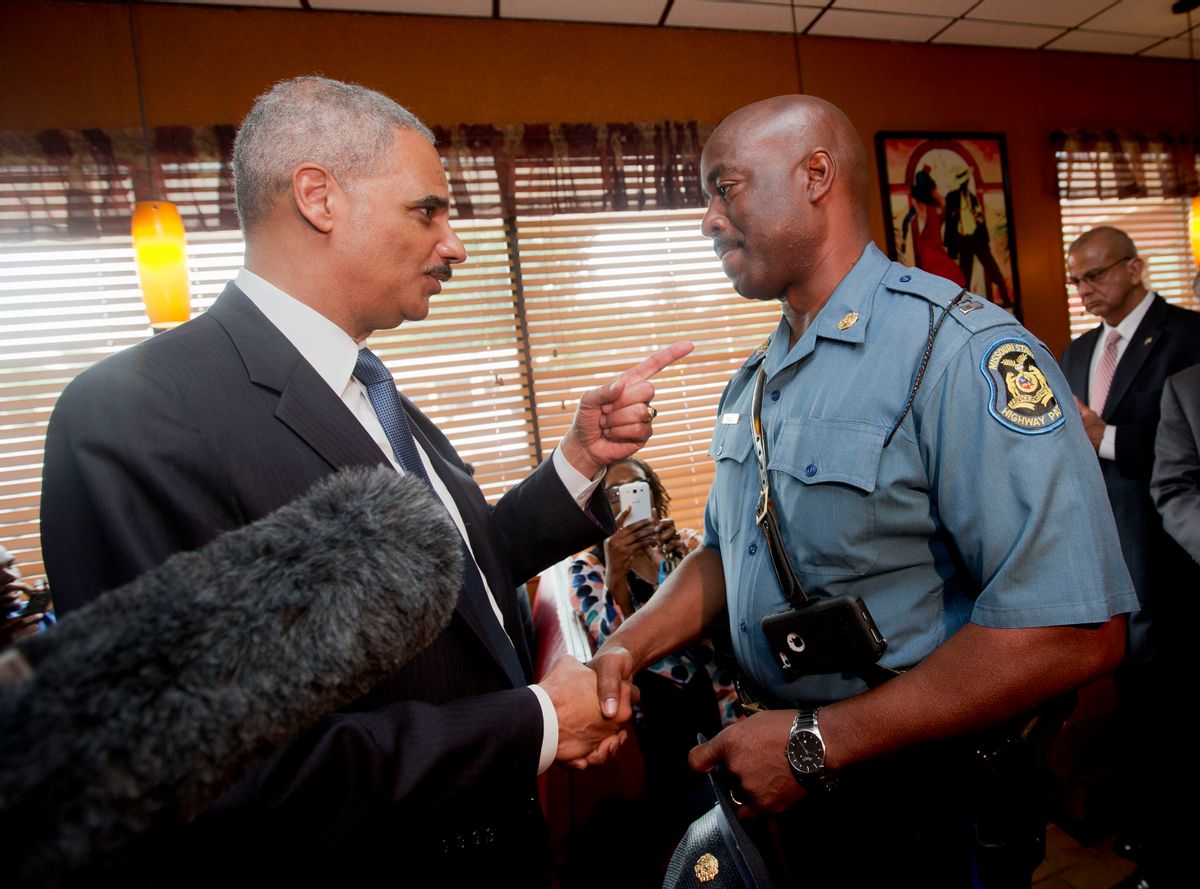 Attorney General Eric Holder talks with Capt. Ron Johnson of the Missouri State Highway Patrol at Drake's Place Restaurant, Wednesday, Aug. 20, 2014, in Florrissant, Mo. Holder arrived in Missouri on Wednesday, as a small group of protesters gathered outside the building where a grand jury could begin hearing evidence to determine whether a Ferguson police officer who shot 18-year-old Michael Brown should be charged in his death. (AP Photo/Pablo Martinez Monsivais, Pool) (AP)
--

Obama sent special forces to Syria this summer to save Americans held by the Islamic State, but they failed to locate any — including journalist James Foley.

Extremists have turned their social media into a theater of horror — but companies are censoring objectionable content and users are determined not to let it go viral.

The U.S. attorney general tells community leaders of the humiliation he felt after having his car searched after he was twice pulled over in New Jersey.

The AP's Robert Burns reports that the sailors are being kicked out of the service for their roles in a cheating ring at a nuclear power training site.

Same-sex couples will have to wait to wed in Virginia after the U.S. Supreme Court puts on hold an appeals court ruling striking down the state's gay marriage ban.

Riot police and soldiers seal off 50,000 people inside their Liberian slum, trying to contain the Ebola outbreak that has killed 1,350 people across West Africa.

Bank of America has reached a record $17 billion deal with the government to resolve an investigation into its role in the sale of mortgage-backed securities before the 2008 financial crisis, officials say.

8. WHAT FARMER'S ALMANAC SAYS IS IN STORE

The 223-year-old chronicler of climate, folksy advice and fun facts is predicting a colder winter and warmer summer for much of the U.S.

Among other best guesses, the AP's Lynn Elber and Frazier Moore both believe "True Detective" will take home the trophy for best drama.

10. WHO'S STARTING AT QB FOR CLEVELAND

Brian Hoyer — not hotshot rookie Johnny Manziel — will be under center when the Browns open their season against Pittsburgh on Sept. 7.